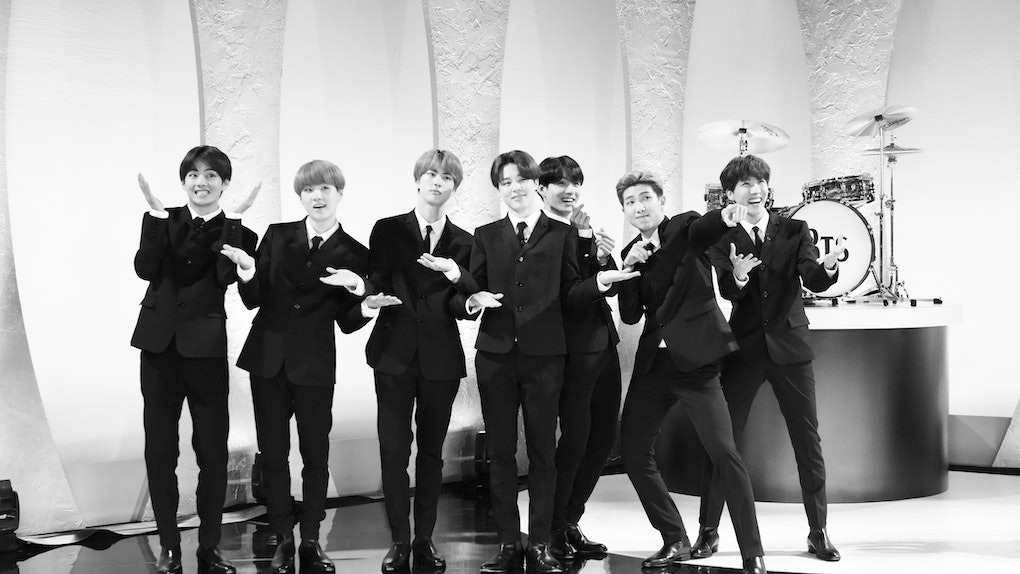 BTS' tour dates for the American leg of their Love Yourself: Speak Yourself tour are on weekends only, leaving the group somewhat free during the week. Since the group is in the New York City area for their upcoming concerts at MetLife Stadium on May 18 and 19, the group booked a few television appearances like Good Morning America and The Late Show With Stephen Colbert. You'd think they would spread out the performances, but no! BTS appeared on both shows on the same day. With Good Morning America being a morning show, it meant that BTS had to wake up really early for their performance in Central Park. Maybe not as early as ARMYs (who camped out for days to get a front-row spot), but still early. V's photo of BTS sleeping backstage at The Late Show shows how tirelessly they work to be out in front of their fans for different performances, which means, sometimes, they have to get shut-eye whenever and wherever they can. And I totally get it. I'm still recovering from GMA, too.

On May 15, BTS performed "Boy With Luv" on The Late Show With Stephen Colbert. It was the guys' first appearance on the show, and to make it more special, they performed on the very same stage that The Beatles did back in 1964 when they were taking over America — the Ed Sullivan Theater. Now "the biggest boyband" label has been passed down to the K-Pop group, who has been making history day after day in the States, like having three albums go No. 1 on the Billboard 200 in less than a year. The last group to do this was — you guessed it — The Beatles. No wonder why The Late Show made their performance of "Boy With Luv" look like it was straight out of the 1960s. I mean, history was basically repeating itself, right?

Making history does sound like a lot of work, so that's why BTS squeezed in a few power naps during their time at The Late Show studio. In a new photo uploaded to BTS' twitter account, the guys — Suga, Jungkook, Jimin, RM, J-Hope, and Jin (in that order, for any new fans still trying to learn their names and faces) — were all backstage sleeping on a couch together. Well, all except for one member: V. ARMYs thought he must have been the one to take the photo, since he was missing from it and also because he has a history of taking photos of his fellow BTS members. I'm honestly so glad he did because is it just me, or does this photo also remind you of The Beatles? First of all, it's black and white just like their Late Show performance, and second, because of the effect, their white dress shirts and black ties (The Beatles' iconic look) totally stand out.

I honestly wouldn't be surprised if, at some time in the future, people look back at the photo and think, "Remember when BTS performed at the Ed Sullivan Theater?" — just like what people say now about The Beatles. And, like them, BTS will go down in history for not only breaking countless records, but also having one of the most dedicated fanbases ever.