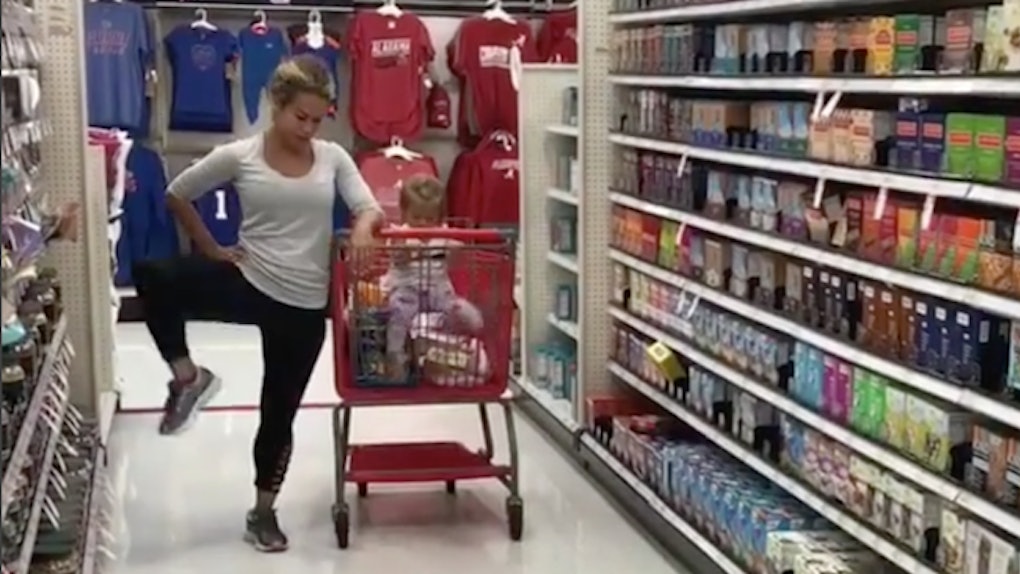 Gym memberships are expensive AF, so I don't know about you, but I'm constantly trying to find new places and creative ways to get my sweat on wherever, whenever. That's why when I found the Instagram page @diaryofafitmommyofficial, I was instantly inspired by this badass mama, who squeezes in workouts in laundry rooms, atop hotel room mattresses, and even while pumping gas. However, the most recent video of Sia Cooper working out at Target went viral after it was posted to SELF's Instagram page, because apparently, people have a big problem with moms just living their damn lives and casually getting their sweat on in beloved discount stores.

Sia Cooper is a personal trainer from Florida, a proud mama of two young children, and she runs a popular fitness Instagram page that casually boasts more than 600,000 followers. TBH, I may or may not be out of breath just thinking about the mere idea of being both a full-time mom and a personal trainer, so yeah, Cooper is basically my idol.

Usually, when Cooper posts videos of her workout circuits in unusual places, she gets supportive comments from fellow mamas who are inspired to squeeze a random sweat sesh into their busy schedules, too.

But when SELF reposted Cooper's video showcasing her nonchalantly working out in the aisles of a local Target, the comments section basically turned into an all-out war zone.

SELF wrote, "Omg we'd totally do this in target," but its followers were clearly not relating to Cooper's unique workout strategy.

One of the more bizarrely aggressive comments regarding the video read:

This is the most ridiculous thing I’ve ever seen!! Target is a sacred place of awesomeness!! Don’t make me feel bad for roaming the aisles while snacking on cheese doodles!!

Like, yeah, I agree with you that Target is a sacred haven that we must all take the time to appreciate. But I think your own insecurities about what you choose to buy when you're at Target is kind of more of a "you" problem, not Cooper's.

Of course, that wasn't the only nasty comment left under the video. Another read:

Go to your house to work out. You are obstructing the aisle.

Correct me if I'm wrong, but I think you can muster up the strength to walk around her, fam. Just going out on a limb here, though, don't strain yourself!

After the hateful comments began to build up on SELF's repost, Insta users began to venture back to Cooper's original post and troll on there, as well.

"As if any woman would actually do that," wrote one person. To which one of her loyal fans replied, "I would lmao."

TBH, when I'm a mom someday, I can only hope to have enough stamina and motivation to do some walking lunges and make those #GluteGains while pushing my toddler through the produce aisles.

Haters will hate, but at the end of the day, Cooper is going to be fit AF and have a quality Target haul to boot, so who's really winning here?

However, amongst all the hateful trolls, there was one diamond in the rough: Instagram user @thecotitasI supported Cooper's Target-toning escapades by saying she knows how tough it is to be a mom with little to no time on your hands:

It bothered me to know that someone who is doing their best to stay active is being shamed for it. You’re a busy mom of two, speaking from experience, I know how tough it can be with small kids. You have to get it in where you can!

In my opinion, the problem is people who get mad at you for doing this, really just have an issue with themselves — and possibly feel guilty when they see you. But also the problem is that they shouldn’t base their problems or their actions on what OTHERS are doing.

All I can say is do you boo! Everyone, take care of YOURSELF, however you decide to do it. No one should be shamed for what THEY want to do.

In the end, though, despite all of our differences, there is one comment, one sentiment, that does unite us all:

God bless Target it is indeed one of most magical places on Earth.

Ain't that the truth. Squat on, Sia, squat on.