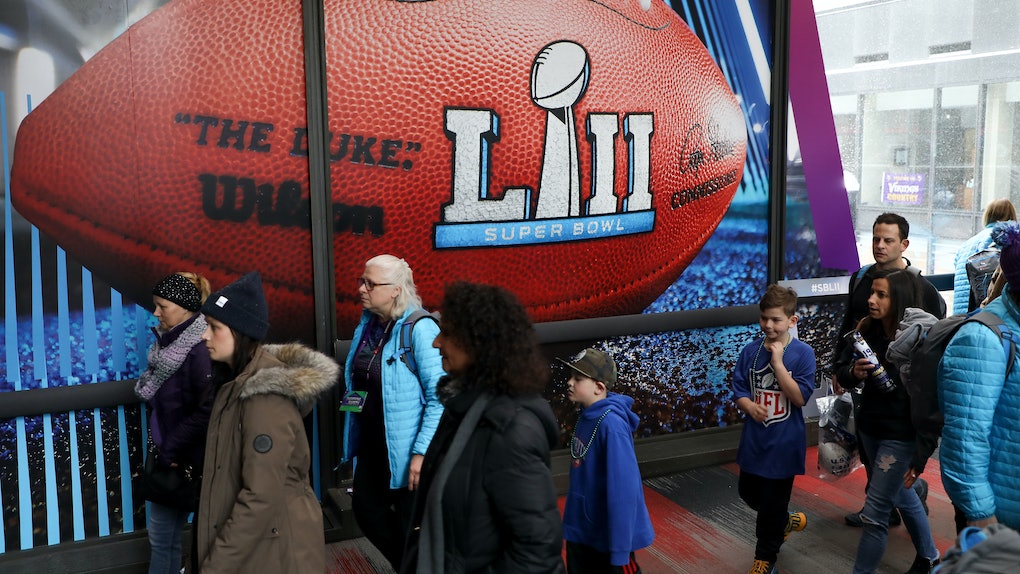 There is one thing that brings us all together during Super Bowl Sunday, no matter who you're rooting for — the commercials. Even if you don't care about football at all, chances are you're still gonna want to see all the ads that will air throughout the big game. Companies have notoriously pulled out all the stops when it comes to advertising during the game, and some of the ads that have run have become so iconic that viewers remember them for years after. And this year Verizon's 2018 Super Bowl commercial is truly a standout.

We didn't get a glimpse of Verizon's 2018 ad until it aired during the Super Bowl on Feb 4. While most companies this year have either teased or released their commercials ahead of the big game, Verizon kept theirs under wraps until the first reveal during a media timeout on NBC. Even though we knew nothing about the ad prior to it's official release, we knew to expect a commercial from Verizon as they confirmed that they would be showing one.

And the telecommunications giant sure did not disappoint. Verizon decided to pull at our heartstrings and dedicated their coveted commercial spot to all the hardworking first responders throughout our country. The ad featured gorgeous shots of first responders while on the job with a emotional cover of the late Tom Petty's classic "I Won't Back Down" playing in the background. The ad calls on us to give credit to these hardworking first responders and their actions as a tribute to their dedication to helping others.

And the emotional ploy that Verizon used in their #AllOurThanks commercial definitely got the heartfelt reaction the company was going for.

The campaign is officially called #AllOurThanks and it's serving as an initiative to give those first responders the credit that they so deserve. The website associated to the campaign reads,

First responders don't always get the thanks they deserve. So we reunited several of them with the people they rescued. Watch their stories and add your thank you message or donate.

Verizon wasn't the only telecom company to make a splash in their advertising during the Super Bowl this year. Their rival Sprint also released a commercial this year, but the company chose to share it with the public ahead of the big game. The company first teased their upcoming ad a couple of days before the game, featuring a somewhat lifelike robot named Evelyn. In the two 15-second teasers, Evelyn was learning how to take selfies and brunch pics with her phone, with the phrase, "See what else she's learned. 02.04.18" flashing at the end.

Sprint decided to release their full ad on Feb. 1 and posed a copy of it to their YouTube page. The somewhat-Westworld inspired robot Evelyn took a jab at Verizon and basically called the human in the commercial an idiot for paying twice as much for Verizon's services. Evelyn claims, "Sprint's network reliability is less than a one percent difference than Verizon's, yet you choose to pay twice as much," which is met by taunting laugher from a group of robots.

The "aggressive" commercial from Sprint stands in stark contrast to Verizon's. While one company decided to go the competitive route and call out their rival Verizon, Verizon decided to dedicate their air time to spread a positive message. One Twitter user took notice to the juxtaposition of the two ads and commented, "sprint went with the 'funny' robot commercial, and verizon just sh*t on 'em with the first responders ad."

So yes, the two ads could not be more different. But the Super Bowl is filled with all types of ads, from the good, to the strange, to the downright nonsensical. One thing is for sure, however — Verizon did exactly what they came to do and got the tears flowing.

More like this
Ellen Pompeo's Response To Jesse Williams Leaving 'Grey's Anatomy' Is Emotional
By Cianna Garrison
'Grey's Anatomy' Quotes That Will Heal Your Broken Heart
By Alexis DeCarvalho and Lexi Williams
As @Royal_Suitor, Here's Why I'm Dedicated To Defending Harry & Meghan
By R.S. Locke
Stay up to date