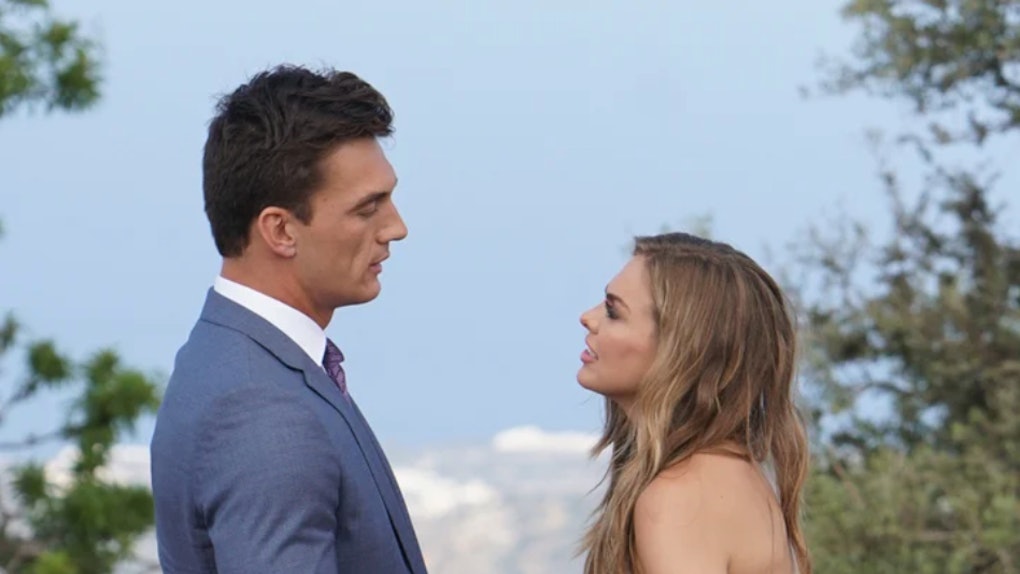 I would imagine there are lots of things that make being a contestant on The Bachelorette stressful, but Tyler Cameron’s quote about picking an engagement ring for Hannah Brown makes me think choosing the ring might be the most challenging task of all. In the first official video posted to his new YouTube channel, Cameron did a 10-minute-long Q&A with his pal Jacob Laham (also known as "Brown Bear" on Instagram). During the Q&A, Laham asked Cameron what the "most terrifying thing" he's ever done is, to which Cameron responded, "Picked out an engagement ring."

Cameron also snuck in a dig at former Bachelorette contestant Cam Ayala when Laham asked for advice for people considering a career in reality TV. "Don't do it," Cameron said. "No, I'm kidding. Just don't be Cam."

As most Bachelor Nation fans recall, Brown wound up choosing Jed Wyatt over Cameron during her finale of The Bachelorette. Cameron took the rejection like an absolute champ. “That’s gonna hurt, but I’m still gonna be your biggest fan and rooting for you,” he told Brown after she rejected his heartfelt proposal. “And I’m wishing you and Jed nothing but success.”

Despite Cameron's warm wishes, things came crashing down for the newly engaged couple when Brown found out Wyatt had never ended his relationship with his girlfriend, Haley Stevens. Brown dumped Wyatt, and since then, some fans have held a torch for Brown and Cameron — even through his relationship with Gigi Hadid.

In March 2020, Brown quarantined with Cameron and his friends in his hometown of Jupiter, Florida, but the duo insisted their connection was platonic.

"We're friends... it's been nice to be able to communicate and be friends again. We are able to talk, and you know, we're just starting off as friends and that's what it is right now," Cameron revealed in April, once Brown had left Jupiter for Alabama, per Cosmopolitan, in a video captured by the Instagram account @bachelorteaspill. "And we're not in a place where we should be worried about dating or anything like that right now... but yeah, that's my homie she's my friend... But it's good to be back on good terms. She's a great person and I'm grateful to be able to call her a friend."

Whatever works for them!