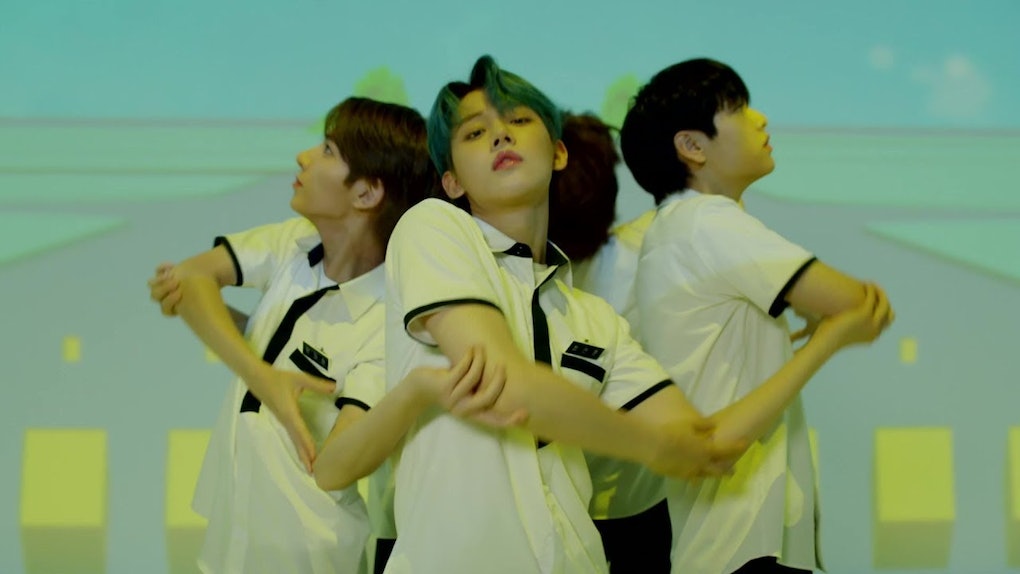 October is already a pretty incredible month for Tomorrow X Together fans — and we're only on Day 2! On Oct. 1, Big Hit Entertainment announced that TXT — the five-member boy band that consists of Soobin, Yeonjun, Beomgyu, Taehyun, and Hueningkai — would be dropping their first studio album on Oct. 21. Then, on Oct. 2, we were gifted with TXT's Dream Chapter: MAGIC album trailer. So yeah, TXT is basically here to hype up October (TXTober?) in the best way possible.

A bit of background for ya: TXT released their debut EP, The Dream Chapter: STAR, on Mar. 4. It only included five songs — "Blue Orangeade," "CROWN," "Our Summer," "Cat & Dog," and "Nap of a Star" — but each one was absolutely legendary. The "CROWN" music video quickly scored over 15 million views within its first 24 hours of its release. Pretty major. The Dream Chapter: STAR went on to set some serious records globally, including charting at No. 1 in 44 countries on iTunes Top Albums and becoming the fastest K-pop boyband to chart their debut album on Billboard 200, coming in at No. 140.

And now that TXT has become even more popular and is finally releasing a full album — which "unfolds the second story of the boys chasing their dreams," according to their press release — I can only imagine how many views their new music videos are gonna get!

On Oct. 1, Big Hit released a 15-second teaser to share the news of the boys' upcoming album, Dream Chapter: MAGIC. MOA was beyond pumped to learn the new title, the Oct. 21 release date, and the band's cool new tri-color, three-star logo.

Check it all out in the short clip below:

Fans only had to wait a single day to see what TXT had in store, because on Oct. 2, Big Hit dropped the full Dream Chapter: MAGIC concept trailer video.

Let's take a look at the full teaser:

It's so beautiful, you guys! These boys are just so talented, you know? I love all of their amazing dance moves superimposed on a backdrop of three-dimensional graphics. The whole vibe is just so magical and surreal. I could seriously watch this on a loop all day. Especially their epic dance moves! The boys sadly had to push their original September comeback back date back to October due to some band members getting sick, but based on this concept trailer, it was well worth the wait, because the boys look better than ever!

And I'm not alone, of course. MOAs on Twitter were blown away by the cool yet somehow super emotional aesthetic, and they hit up the app to share all the feels.

The good news, is that there are less than three weeks remaining until TXT releases The Dream Chapter: MAGIC, and it's clear that fans are more than ready for what's sure to be an epic comeback.