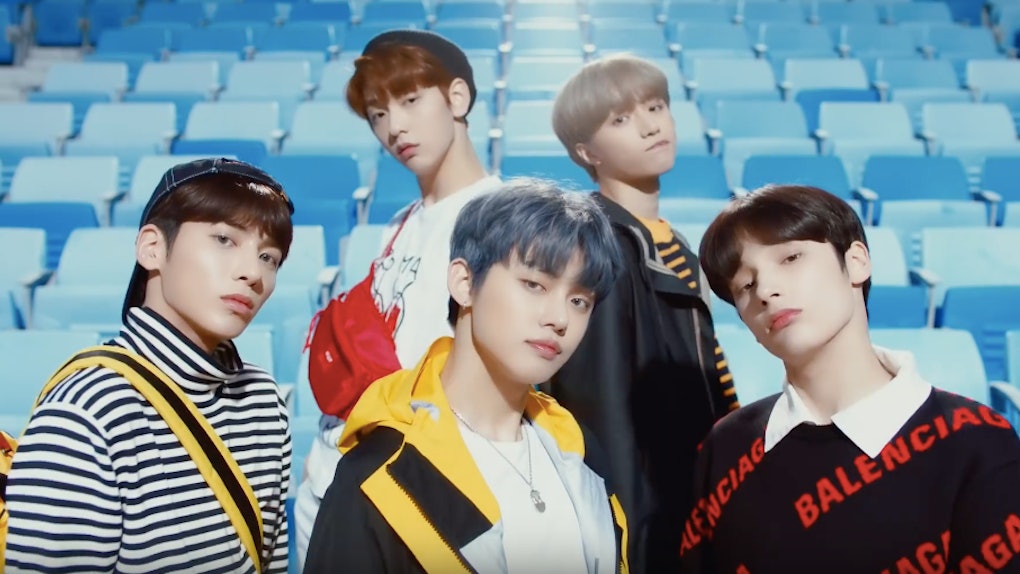 TXT's "Cat & Dog" Music Video Is So Cute, You'll Want To Play It Forever On Loop

Have you guys heard of TXT? The K-pop group — full name: Tomorrow X Together — is BigHit Entertainment's latest boy band. And if BigHit sounds familiar to you, it's because it's the same amazing label that gifted us all with the seven musical superstars collectively known as BTS. So yeah, this is all kind of a big deal. Anyhoo, TXT released their first album — Dream Chapter: Star — on March 4, and now TXT's "Cat & Dog" music video for the b-side bop is here. And lemme tell ya — it's so incredibly fun that you should prob cancel all your plans because you're gonna wanna watch the five-strong crew sing and bounce around for days.

But before we get to the video, let's rewind for a sec — #VideoJokes! — so I can give you the full scoop on this adorable boy band. OK, so on Jan. 10, BigHit revealed that their new group was called TXT, and that it was made up of five members: Yeonjun, Soobin, Hueningkai, Taehyun, and Beomgyu.

"TOMORROW X TOGETHER is a bright and youthful boy band where each member is different from one another, shining in their own way to create a synergy," BigHit revealed in a statement at the time "Just as how their name suggests, the different members have all come together under one dream in hopes of building a new tomorrow."

I dig it. I mean, just look how cute these five dudes are:

HMU TXT, I am so ready to build a new tomorrow with y'all!

In their new "Cat & Dog" music vid, Soobin, Yeonjun, Beomgyu, Taehyun, and Hueningkai tap into their animal instincts as they scamper around inside a cat house, pose with a giant box of pet food, stack up a bunch of dog bones, play around with orange tennis balls, snuggle up to a bunch of fluffy pets, and rock out while decked in cat ears.

The whole thing is a super adorable, upbeat romp that shows fans just how much fun these guys have and how incredibly talented they are.

First of all, how amaze was Yeojun's rap? And I seriously cannot get over all those cool feline dance moves.

So which one was your fave? I'm kinda partial to this one, because it's legit the cutest thing I've ever seen:

Also, where can I find these cat ears? Because I totally think TXT should be packaging them with their album, don't you?

I mean, the whole music video is just such a happy vibe, I want to transport myself right inside of it. Who do I need to call to make that happen?

Oh, and if you're wondering what TXT is actually singing about in the video, according to a translation by Twitter fan account @DoYou_TXT, the song's lyrics are apparently a love letter to their fans.

Have you ever heard anything so sweet?

Meanwhile, iHeartRadio recently announced that TXT will perform at its 2019 Wango Tango music festival in June, along with the Jonas Brothers, Halsey, Zedd, and a bunch of other acts.

Be sure to get your tickets when they go on sale May 3 if you wanna see these cool cats live!