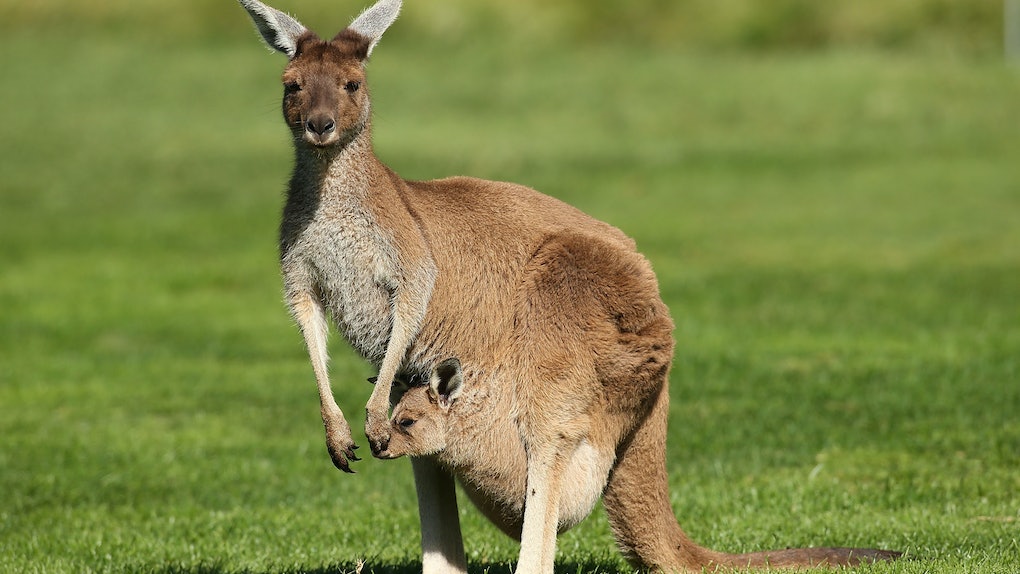 Sometimes when you use a public bathroom, there's some sort of road block. Maybe there's a really long line, or the bathroom is temporarily closed for cleaning. But as everything is just a tad more wild in the land Down Under, one tourist ran into a kangaroo lying in a "come hither" position outside a national park restroom. And as the Twitterverse tends to take basically everything to the next level, tweets about this viral "sexy kangaroo" are straight up hilarious, and will have you hippity-hopping all the way to The Outback.

Sandrina Duniau, 30-year-old French tourist, found the "sexy" animal while traveling with her partner in Dec. 2017, News.com.au reports. Apparently, she had "fallen in love" with the wildlife in Australia... and I guess the wildlife was simultaneously falling in love with her. When the couple visited John Forrest National Park (just east of Perth), Duniau made a routine and typical trip to the bathroom — but her encounter was what many outside of Australia would probably consider to be atypical.

Upon running into the seductive 'roo who was casually relaxing outside the bathroom entrance, Duniau was initially a little frightened (look at those muscles!?). As what many might call "doing it for the 'gram," Duniau hastily snapped a pretty amazing photo. Soon to be Australia's next top model, the 'roo made modeling history outside that fateful national park bathroom.

Eventually, word got out about the hilarious and timely photo, and Duniau opened up to News.com.au, about her glorious encounter. She said,

It was right in the middle of the toilets blocking the entrance to the doorway and there was no way I was brave enough to go and bother it. I couldn’t believe it and thought wow — only in Australia would something like this ever happen. I love kangaroos so much and I just think they’re adorable. This one was particularly funny and cute the way it was posed... I couldn’t stop laughing when I saw it was posed like that. I wouldn’t have been surprised if it had said, ‘Hey girl, what’s up?’

As you can most likely imagine, the photo in question basically broke the internet. Like, almost as much as Kim Kardashian did when she balanced champagne on her butt. Well, maybe that's a little bit of an exaggeration (because nobody can beat Kim K), but reactions to the kangaroo's "sexy" photo did not disappoint in any way, shape, or form.

So has anyone signed this kangaroo yet, or am I just gonna have to write up a modeling contract for him myself? His modeling career is just taking off, and we're all anxiously awaiting his Vogue debut.

There's never a dull moment among Australia's kangaroo population, though, because this isn't the only hilarious kangaroo scandal to happen in recent history. You might remember that little incident in Melbourne last year when two kangaroos stopped traffic because they were having careless, wild sex in the middle of the street. Nobody asked to see it, but it was undoubtedly a wild sight.

So I guess it's no rumor that crazy kangaroo-related occurrences regularly happen in that mysterious land down under, whether it's a kangaroo striking a seductive pose outside the loo, or if it's two 'roo's gettin' down in the street. Or, when a kangaroo steals a jacket filled with a lot of money, and is also a very talented rapper (oh, wait... that's just the plot-line to the 2003 blockbuster, Kangaroo Jack.) Either way, these isolated incidents have definitely peaked our interest in seeing what other wild antics occur in the land down under, because we are definitely ready to spot "seductive" 'roo or two in our lifetime.