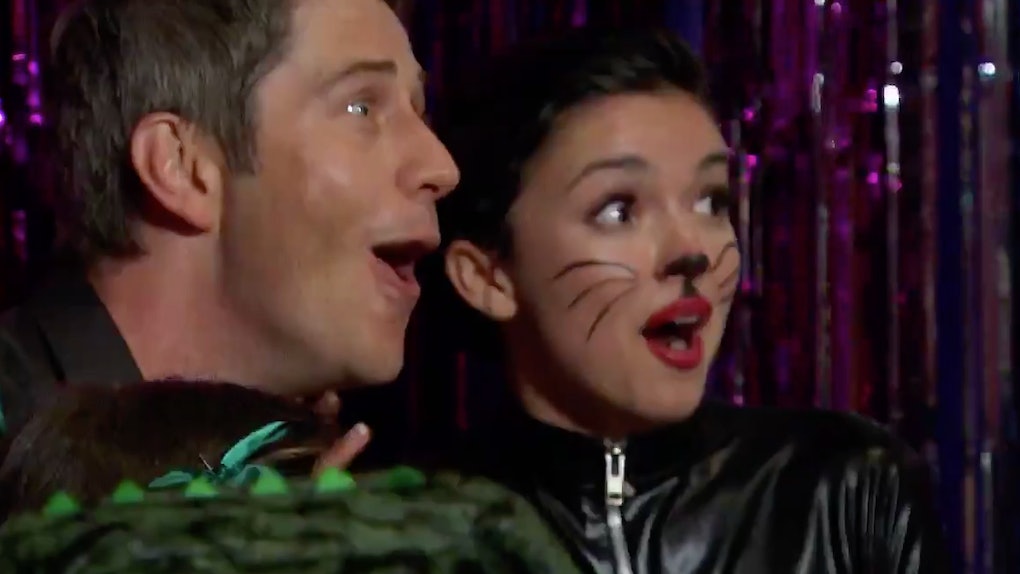 Tweets About The 'Bachelor' Wrestling Date Show Fans Are Pissed

Well... that was interesting. By now we know that dates on the The Bachelor often put the ladies in awkward and challenging situations. We've seen everything from an icy Polar Bear Plunge in a Canadian lake to bungee jumping to a Backstreet Boys dance competition. Whatever happened to dinner and a movie? Not on this show, my friends. This week, ABC took inspo from the Gorgeous Ladies of Wrestling for its own personal take on the concept — Gorgeous Ladies of The Bachelor. And this "GLOB" Bachelor group date was just about as dramatic as any wrestling match I've ever seen. OK, to be perfectly honest, I've seen like four.

Basically the women were pitted against each other in pairs to take on larger-than-life personas in outrageous costumes and pretend to beat the living daylights out of each other.

As expected, there were lots of tears, "bad vibes," and insult-slinging courtesy of the actual GLOW alums of the '80s, because this is wrestling and not a tea party. The ladies were not here for it, especially Bibiana and Tia. "What is it with me? Do i just have a magnet that says challenge me?” Bibiana lamented, after one of the mentors made fun of the spelling of her name. Uh, oh.

“Today should be fun because it’s one of those dates that’s going to be uncomfortable for all of us. I’m looking for someone who’s not uptight … I hope we all enjoy this crazy date," Arie said, later confessing he was "not in his element." And #BachelorNation Twitter sure felt the discomfort...

If you watched Netflix's GLOW (if you did not, please stream ASAP), about the actual Gorgeous Ladies of Wrestling program in the '80s, you know that wrestling "characters" were a central part of the whole act. Um, what does this have to do with finding your soulmate, again?

Bekah and Marquel were coupled in the ring and kind of killed it. I would think playing "Lunch Lady" to Bekah's "Sex Kitten" situation would be a hard sell, but they pulled it off. "She’s owning it 100 percent and I have no doubt she’s going to go all in,” Bekah admitted. Lunch has been served!

Let's just say that Lauren and Marikh went all out for their litte show, because those two were making jaws drop... and everyone blush. Things proceeded to go from ridiculous to raunchy in a matter of seconds. "This is, like, so weirdly sexual," Bekah said.

Krystal and Jacqueline teamed up for a spicy match-up. Cougar Krys got into the ring to “unleash her claws” and it was actually kind of scarily intense? Note: Do not mess with her.

Tia was up against Bibiana annnnnd eventually got over her fear of the ring. “Today came full circle,” the "Southern Belle" exclaimed. Plus, she got Arie to comfort her through the ordeal, so that was a plus.

Arie also got in the ring for a little wrestling action of his own... as "The Kissing Bandit," of course. But Arie's a lover not a fighter, as we all know by now.

“I’m a hopeless romantic and I’m very passionate. And, yes, I’m in a place in my life where I am really ready for marriage and I want more than anything to start a family and settle down,” Luyendyk previously told Variety. “And I think that people who watched Emily’s season could tell that I was very passionate and that I was very romantic, and I’m still that same person.”

We don't doubt that side of him. Remember that last week he gave Becca thousands of dollars worth of goods and a kiss accompanied by gold confetti? Then he took Krystal home to meet his freakin' parents on a first date?

Fans are looking forward to see more of the this season's, er, innovative dates. But we have to be honest about this week — things got pretty extreme, even for this show. Til next week...

More like this
Peter Weber’s Quote About How ‘Bachelor’ Producers Get Contestants To Kiss Is Wild
By Abby Monteil
'Bachelor In Paradise' Season 7: Premiere Date, Cast, Filming, & More Info
By Rachel Varina
Bachelor Nation's Reactions To Colton Underwood Coming Out
By Candice Jalili
Stay up to date