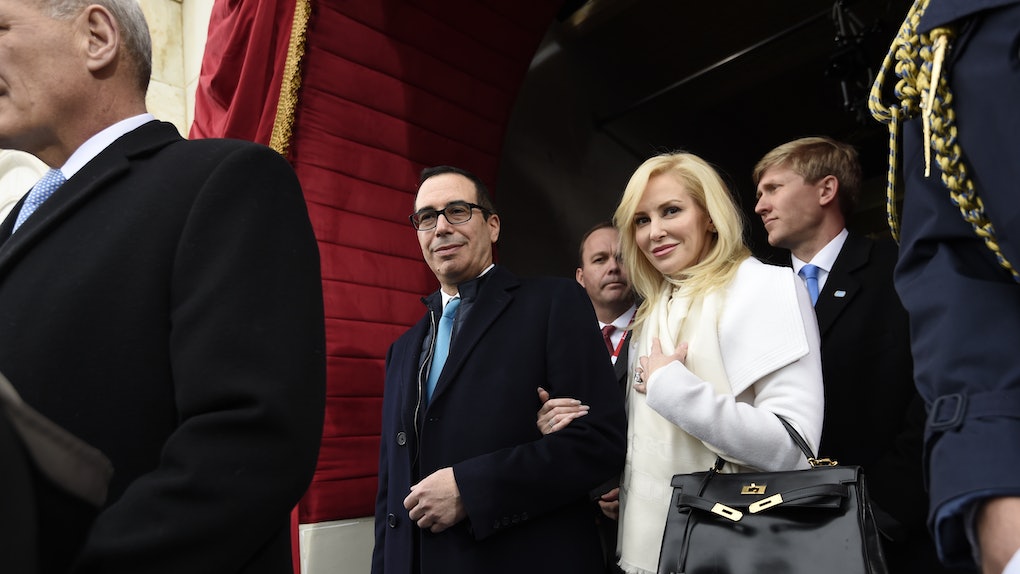 The Trump administration gets a lot of flak for being out-of-touch with regular Americans. After all, this is the wealthiest administration in U.S. history. And a photo op at the Treasury on Nov. 15 didn't help matters: Treasury Secretary Steve Mnuchin and wife Louise Linton's photo with cash has landed them in hot water.

According to CNN, Mnuchin and wife Linton visited the Bureau of Engraving and Printing in Washington, D.C. on Wednesday, Nov. 15, to celebrate the fact that Mnuchin's signature will be on the new printing of $1 bills, along with U.S. Treasurer Jovita Carranza. The bills should start circulating in December.

An exciting moment, for sure — especially given that, according to the Federal Reserve, 11.7 billion $1 bills were in circulation last year. And in fiscal year 2016, the Treasury's Bureau of Engraving and Printing printed 2.45 billion notes. So, yeah, I'd be stoked if my li'l scribble were about to be printed and circulated to the tune of a few billion times.

The problem with the photos, though?

Honestly, the pair look a bit like robber barons in a cheeky cartoon world where their plans always involve laughing deviously in a mahogany-coated office. While Mnuchin himself almost looks like a normal high-level government employee posing for an awkward photo op, it's Linton's blue steel gaze at the camera and her loving half-laugh in the second photo that really drives home the whole captains-of-industry vibe. I mean, just look at the way she's looking at that sheet of bills.

But anyways, the internet had a lot to say about the optics. Because of course.

I mean, honestly, Linton looks like she just bought the Treasury.

If they're Bond villains, she's the mastermind, and he's the dullard errand boy.

This isn't the first time the couple has been reamed for seeming out-of-touch. Back in August, Linton posted an Instagram post — complete with tags of the #designer #clothes she was wearing — in which she and Mnuchin were deplaning from a government jet after visiting Kentucky for meetings and the solar eclipse.

When an Oregonian woman commented, "Glad we could pay for your little getaway #deplorable," Linton went ballistic.

Ironically, Mnuchin was also the subject of an ethics inquiry this summer after he reportedly requested to use a government jet — for his and Linton's honeymoon.

So, needless to say, watching two disgustingly rich people pose with a sheet of dollar bills like they just pulled off the heist of the century, one could argue, warrants some humor.

Then again, it's all fun and games making fun of how tone deaf these photos are — until you remember what's really at stake.

Mnuchin's net worth is "as high as $500 million — on top of which he has pulled in recent additional income of nearly $70 million," according to Fortune. The extremely wealthy Treasury Secretary has been instrumental in the push for Trump's tax reform plan, which, if passed, would include massive tax cuts for the wealthy. The reform plan which Mnuchin is pushing would additionally eliminate the Affordable Care Act's individual mandate, according to CNN, kicking 13 million people off of health care.

Which means that the tax reform plan he is helping to push would almost certainly give him a substantial tax cut, while leaving regular Americans footing the bill.

So, yeah, it's fun to make fun of two people who have probably never even touched a dollar bill before. But it's also important to keep in mind what's at stake when someone who finds dollar bills delightful rather than essential is in charge.