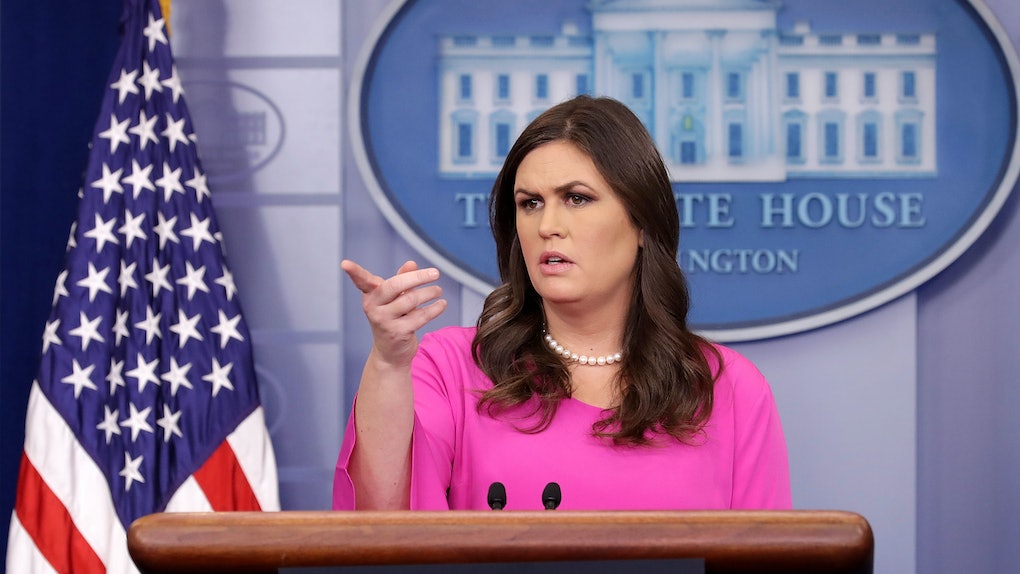 Thanksgiving marks one of those rare days in the year when it's totally acceptable to brag about your cooking on social media. Bring on those Instagram pictures of turkeys, sweet potatos, and homemade gravy. You've earned it, damnit. Press Secretary Sarah Sanders joined in on the humble brag cooking tradition, and posted a picture of a pie that, ermmm, looked like it had been pulled directly from Google images. Tweets about Sarah Sanders' pecan pie looking like a stock photo will both crack you up and make you question the press secretary's baking integrity.

Here's how #PieGate went down. On Nov. 23, Sanders sent out this tweet:

I dont cook much these days, but managed this Chocolate Pecan Pie for Thanksgiving at the family farm!

She posted a picture of the pie in question, which, I'm really sorry to say, looked exactly like a stock photo. It was literally taken on a completely white background. Are there any surfaces in your house that are THAT white? Or maybe I just need to clean my countertops more.

Twitter had a field day over the questionable photo.

Many pointed out items that they too had casually "made."

Others just straight up called her out for potentially stealing a stock image.

Oh yeah, and Chrissy Tiegen had some ~jokes~ too.

So, what does Sanders have to say on this whole pie scandal? Fox News reached out to her for comment (LOL what is the world we're living in), and the press secretary responded,

Of course I made the pie. I make it for every holiday family gathering and have for years. I also used to make them for my neighbors on my street at Christmas every year.

Sanders continued to fight her case, retweeting a tweet from David W. Sanders, who provided some crucial background evidence, writing,

Asked @PressSec’s daughter about #piegate. Claims pie was “made by Mom” and was “yummy”. Declined further comment as Paw Patrol was on.

The press secretary also got into a (playful?) back-and-forth Twitter exchange with American Urban Radio Networks White House correspondent April Ryan, who really wanted to get to the bottom of #PieGate. Ryan tweeted out on Nov. 24,

I am not trying to be funny but folks are already saying #piegate and #fakepie Show it to us on the table with folks eating it and a pic of you cooking it. I am getting the biggest laugh out of this. I am thankful for this laugh on Black Friday!

To which Sanders responded,

Don’t worry @AprilDRyan because I’m nice I’ll bake one for you next week #RealPie#FakeNews ;-)

This is all doubly amusing because Ryan and Sanders have an, um, somewhat contentious relationship. Like, that time when the two women went head to head over Chief of Staff John Kelly's statement that the Civil War occurred because there was of a “lack of compromise.”

“What is the definition of compromise as it relates to slavery and the Civil War?” Ryan asked during a press briefing on Nov. 1.

“I think it is disgusting and absurd to suggest anyone inside this building would support slavery,” Sanders said.

The rest of their interaction was pretty terse.

Will Sanders and Ryan — quite literally — break bread during the next press briefing? Newsmax White House correspondent John Gizzi certainly hopes so.

We might never truly get to the bottom of #PieGate, but if that dessert was a legit, then many snaps from me for a perfect crust and some insanely white counter space.

More like this
These Tweets About NASA's Photo Of "Blue" Dunes On Mars Are In Awe Of The Stunning Shot
By Lara Walsh
These Tweets & Memes About Matt Gaetz's Venmo All Make The Same Joke
By Cianna Garrison
The Odds Of A Plane Crash Are One In 11 Million, Yet You're Still Afraid
By John Haltiwanger and Lilli Petersen
Stay up to date