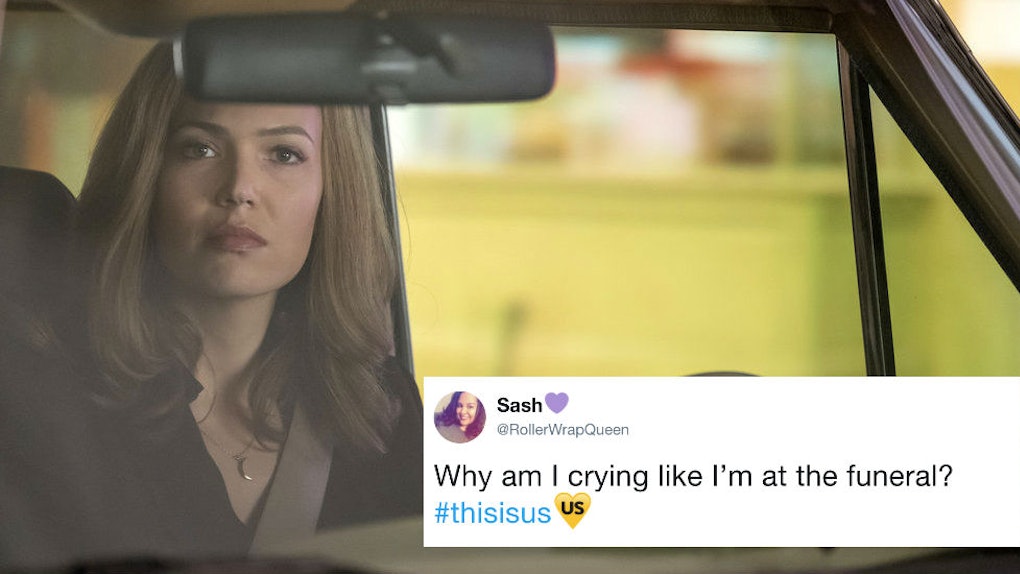 After ripping out our hearts and stomping on them in Sunday night's special post-Super Bowl episode, This Is Us followed up the big reveal of Jack Pearson's death with another heartbreaking episode, which showed us the Pearson family at Jack's funeral. In an episode comprised full of flashbacks, This Is Us showed fans Jack's funeral and yet again reduced fans into emotional messes. Just take a look at some of the tweets about Jack's funeral on This Is Us and relive all the agony.

Spoiler alert: Don't read on if you haven't seen This Is Us Season 2 Episode 15 "The Car" yet. Tuesday night's new episode brought us back to various scenes of Jack's life before his death, and the funeral that immediately followed it. The common thread throughout all of it was the family's car, a Jeep Wagoner station wagon that we see Jack buying for the family in the opening scene. The episode played a number of vignettes of times Jack and the rest of the Pearson family shared in the car, such as him teaching Randall to drive, having a heart-to-heart with Kate about Alanis Morissette, and a near medical scare with Rebecca.

But among those sweet memories, we also saw glimpses of how the Pearson family dealt with Jack's death immediately after it happened. The main story of the new This Is Us episode was the Pearson family attending Jack's funeral, which was held outdoors near what Jack had earlier told Rebecca was his favorite tree. As expected, the funeral service was so hard to watch, as Rebecca, Kevin, Kate, and Randall all held back tears. They weren't the only ones getting super emotional — all of Twitter also broke down when the funeral scene aired. Check out some of the heartbreaking tweets about the service below:

But if you thought the crying would stop after the funeral ended, then you must have forgotten what show you were watching. After the funeral, Rebecca pretty much breaks down, left totally unsure about whether she can be the mother she needs to be without Jack at her side. That's when we see a very welcome old friend walk in — Dr. K, the life advice guru who delivered the triplets, noticed Rebecca's grief and stops by to deliver some of his famous inspirational words. He reminds her that she has been a strong, tough woman throughout her life, and that she will continue to be an incredible mother even though Jack is gone.

Reassured by the good doctor's words of wisdom, Rebecca stages a funeral service of her own with Kevin, Randall, and Kate, taking them to Jack's favorite tree with the urn containing Jack's ashes. Rebecca swallows her grief and shows a strong face to her children, telling Kevin and Randall that neither of them should worry about trying to fulfill some role as the man of the house and to just focus on hanging out and being kids, and telling Kate that she should not blame herself for Jack's death, which she knows that her daughter will do since Jack went back into the burning house primarily to save her dog. Then, the family hugs it out and all grab a handful of Jack's ashes to scatter around the tree. We also see Kate leave some of the ashes in the urn, which we know from the present-day episodes that she keeps in her apartment.

The final emotional moment is the Pearson family taking their first steps in getting back to life as normal following Jack's death, as Rebecca drives them off to a Bruce Springsteen concert that Jack was planning to surprise them with.

Though the show always leaves us needing boxes of Kleenex, the funeral episode ended on an uplifting note. We'll be able to learn more about Jack's early life when the show returns on Tuesday, Feb. 27.