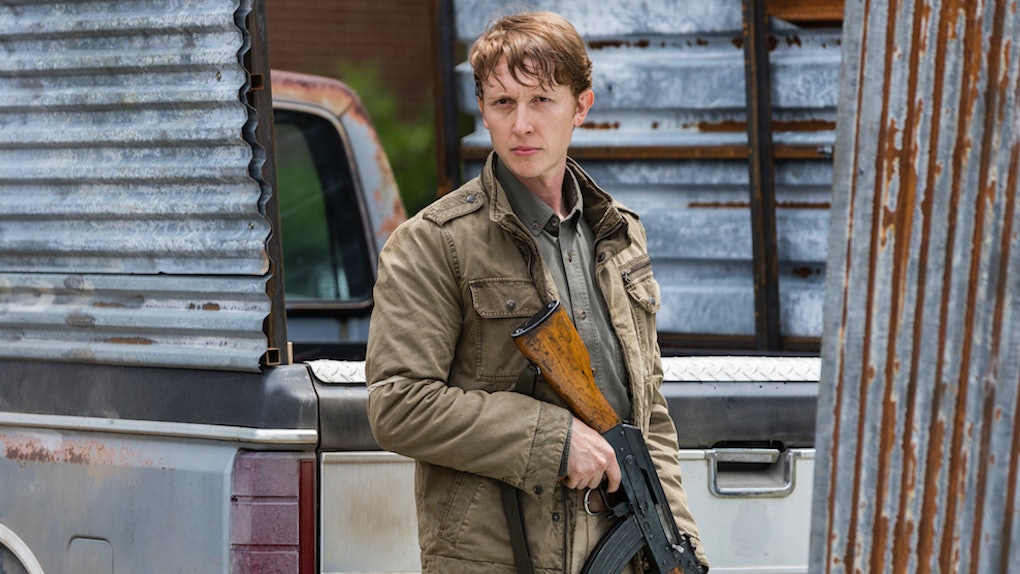 Tweets About Eric On ‘The Walking Dead’ Are Just So, So Sad

In a show full of deaths, this week's The Walking Dead saw one of the most heartbreaking deaths in the show's history. After Eric Raleigh of Alexandria was shot during a raid on a Savior outpost, his boyfriend Aaron took him by a tree to rest, before Aaron went back to battle per Eric's wishes. But by the time Aaron came back to check on him, it was too late. And the tweets about Eric on The Walking Dead are seriously heartbreaking.

Fans were already worried after Eric was shot in battle last week's installment of The Walking Dead. The last thing we saw of him last week him bleeding heavily from a gunshot wound to his stomach, as Aaron led him away from the battle. This week the show picked up where it left us off, with Aaron placing Eric under a tree and inspecting the gunshot wound. As the two talked about how the bullet wasn't stuck and it seemed like a clean wound, it looked like there was hope that Eric would survive after all. Aaron seemed optimistic as he left, at Eric's urging, to get back into battle. But alas, the emotional goodbye the two shared was the last conversation that they'd have.

Aaron returned to check on his boyfriend in one of the last scenes of Season 8's third episode, "Monsters." But when he went to the tree, all he found was a giant bloodstain and Eric's abandoned gun. Confused, Aaron looked around — only to see a walker slowly shuffling into the horizon. The shot confirms that Eric is (heartbreakingly) now a member of the undead.

The look on Aaron's face was too much to handle:

Some fans wished the couple was dealt a better fate than this:

But some fans are, well, a little less upset about the loss and looking forward to Aaron's future:

Last week fans were concerned about Morgan and the possibility of his death, after he was shot and seemingly killed partway through the episode "The Damned." That time, we ultimately learned that he was still alive and coming back to fight with a vengeance, to fans' delight. But this week, we were sadly not as lucky.

Eric has been rumored to die since last week's episode, thanks to his belly wound. But when we left him and Aaron in "The Damned," it seemed like there could still be some hope of him surviving. Tonight's emotional conversation between the two, as they professed their love before Aaron ran back to battle, definitely felt like an unspoken final goodbye — but fans still remained cautiously optimistic that there's a chance of him surviving. But unfortunately it was Eric's time.

Another thing that fans pointed out concerning Eric's death is the fact that with this loss, there are officially no more gay couples on the show. As Vanity Fair recalls, the season 6 fan outrage over Denise's death was highly criticized for perpetuating the "bury your gays" trope that occurs in film and TV, in which LGBTQ+ characters get killed off instead of getting a happy ending.

And although the death of Eric isn't definitely isn't great for the trope, the way the show handled his death is different than Denise's death. There was a lot of emotional weight given to Eric and Aaron's conversation in the last scene that they shared, which made the loss feel like a more complete one (despite it still being a loss, nonetheless).

And there's still some hope that we'll see another gay couple blossom on The Walking Dead. As Vanity Fair also points out, fans still have three gay characters left on the show: Aaron, Tara, and Jesus. With Tara ruled out for the moment, this leaves room for the possibility of a Jesus and Aaron romance. So any fans that have shipped the pair may be getting exactly what they wish for in the coming weeks. Until then, we'll let Aaron and Eric shippers mourn in peace.

More like this
This Reported Update About HBO Max's 2021 'Friends' Reunion Is Great News
By Cianna Garrison
In 'Riverdale' Season 5, Toni Topaz Is The Black Superwoman Without A Cape
By Erika Hardison
These Tweets About Regé-Jean Page Leaving 'Bridgerton' Are Royal Bummers
By Cianna Garrison
Stay up to date