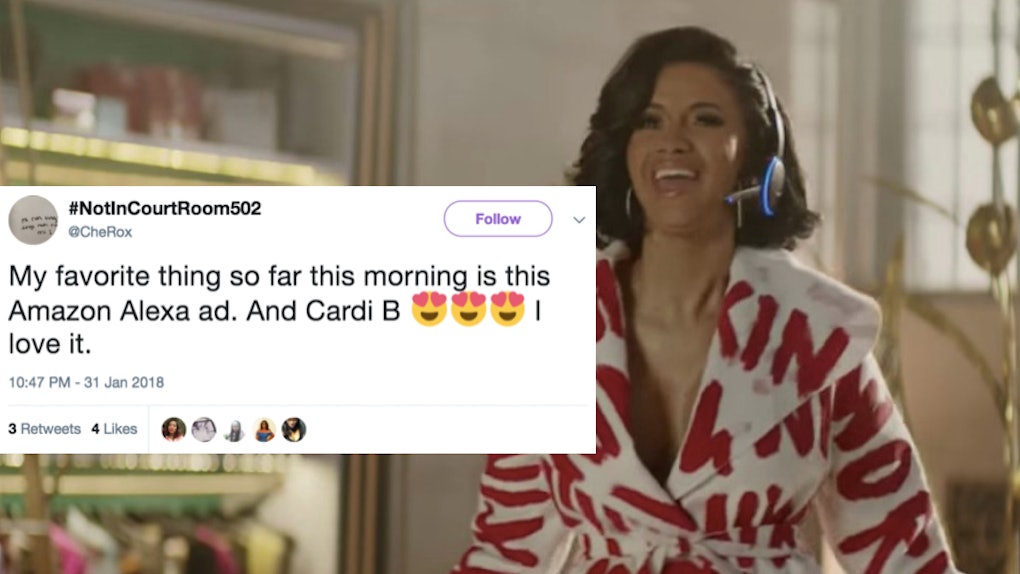 Cardi B fans got a huge surprise during the Super Bowl (no, it wasn't a performance — I'm sorry). The "Bodak Yellow" rapper is featured in Amazon's new commercial, where she takes on the voice of your favorite robotic sidekick, Alexa. No, I'm not kidding. If you're totally freaking out at the guest appearance, you're definitely not alone. Everyone on Twitter is losing their sh*t, and these tweets about Cardi B in Amazon's Super Bowl commercial prove it. Deep breaths, everyone. Deep breaths.

If you don't know who Cardi B is, then you probably haven't turned your radio on in a while. I was introduced to the 25-year-old rapper after hearing her hit song, "Bodak Yellow." It's honestly catchy AF, and if you haven't heard it yet, you should probably go listen. I digress, though.

OK, let's get back to the commercial. In Amazon's Super Bowl ad, Alexa loses her voice after coughing and causes mass chaos in the Amazon office. As a solution, the team finds a group of celebrities to replace it — including Cardi B. In one of Cardi B's segments, a boy asks Alexa how far Mars is, and Cardi's response is hilarious. She laughs, and says, "Well how am I supposed to know? I've never been there. This guy wants to go to Mars; for what?!" After giggling, she says, "There's not even oxygen there!"

The second segment of the commercial that features Cardi B shows a man asking Alexa to play country music. LOL, does he really think Cardi B is going to let that happen? Good joke. Instead of listening to him and playing a country tune, she starts blasting "Bodak Yellow" (that's far from country, BTW). After he corrects her, she stops the music — and then continues again with the same song. It's hilarious, TBH.

As expected, people went wild on Twitter proclaiming their appreciation for Cardi B starring in Amazon's Super Bowl commercial. In fact, I think she might've out-shined the football players on this one.

Some people really want Cardi B to replace Alexa's voice.

Others are just happy to see her in the ad.

See?! Twitter is hyped right now. I wouldn't even doubt if people started asking Amazon if Cardi B could be the Alexa voice for good. Talking to a celebrity every day through your Alexa would be pretty sweet, right?

If you agree, you might be interested in the other celebrities Amazon features in the commercial. Some stars include Anthony Hopkins, Gordon Ramsay, and Rebel Wilson. Hopkins is shown at the end of the commercial feeding a peacock while a woman asks Alexa to "call Brandon." Ramsay, on the other hand, is shown completely losing it after someone asks Alexa how to make grilled cheese. The British chef — who's known for roasting people on Twitter — calls the man "pathetic" and vents about how the recipe for a grilled cheese sandwich is literally in the name. He has a point, I guess.

Rebel Wilson's segment of the commercial is hysterical, because she makes an adult dinner party awkward AF from the comfort of her bath tub. A man at the party asks Alexa to set the mood, and the actress tries to talk dirty through her mic. To say the least, things got weird.

So, which celebrity voice would you want taking over your Alexa? In my opinion, Ramsay's would be too harsh, and he'd probably get mad at my cooking skills (or, lack thereof). I think I'm going to side on Twitter with this one, because Cardi B's voice in Alexa would be pretty awesome. I bet that by the end of the first day, you'd have all the lyrics to "Bodak Yellow" memorized.

More like this
This 'Stranger Things 4' Theory About Eleven's Past Is Super Dark
By Ani Bundel
These Tweets About Beyoncé On Netflix's 'Selena: The Series' Are Too Much
By Dylan Kickham
These Thirsty Tweets About The Darkling From 'Shadow And Bone' Say It All
By Ani Bundel
Stay up to date