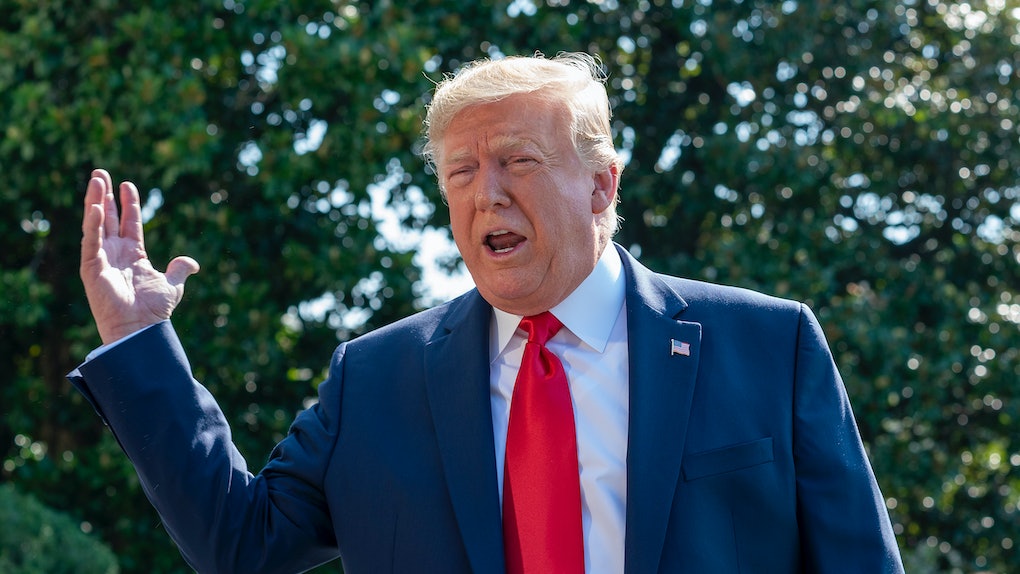 Well, just when we thought this feud between President Donald Trump and the four progressive congresswomen known as "The Squad" was coming to a close, tensions have escalated yet again. Ahead of a planned visit to Israel's West Bank by two members of The Squad, the president called for the country to ban the congresswomen from entering. Don't believe me? Check out Trump's tweet about Ilhan Omar and Rashida Tlaib visiting Israel and see for yourself. It might be his most extreme move yet.

On Thursday, Aug. 15, President Donald Trump took to Twitter ahead of Rep. Rashida Tlaib of Michigan and Rep. Ilhan Omar of Minnesota's planned visit to Israel to address ongoing tensions between Israel and Palestine. According to The New York Times, the two congresswomen, who are both Muslim, were expected to arrive Sunday, Aug. 18 and depart on Thursday, Aug. 22, and visit the West Bank and several major Israeli cities. In the tweet, Trump claimed that Israel would "show great weakness" if the country allowed Omar and Tlaib to enter, and claimed that the two congresswomen allegedly "hate Israel and all Jewish people." Trump wrote,

It would show great weakness if Israel allowed Rep. Omar and Rep. Tlaib to visit. They hate Israel & all Jewish people, & there is nothing that can be said or done to change their minds. Minnesota and Michigan will have a hard time putting them back in office. They are a disgrace!

The White House and representatives for Tlaib and Omar did not immediately respond to Elite Daily's request for comment on the tweet.

Well, apparently Trump's tweet didn't go unnoticed. On Thursday, Aug. 15, Deputy Foreign Minister Tzipi Hotovely of Israel confirmed in a public statement that the country decided to block Omar and Tlaib from entering the country, citing their support for Boycott, Divestment, Sanctions (BDS), a campaign to put political and financial pressure on Israel in support of Palestine. Hotovely said,

Israel has decided — we won’t enable the members of Congress to enter the country. We won’t allow those who deny our right to exist in this world to enter Israel. In principle this is a very justified decision.

In a statement shared with Elite Daily on Aug. 15, Omar condemned the decision. She wrote,

It is an affront that Israeli Prime Minister Netanyahu, under pressure from President Trump, would deny entry to representatives of the U.S. government. Trump’s Muslim ban is what Israel is implementing, this time against two duly elected Members of Congress. Denying entry into Israel not only limits our ability to learn from Israelis, but also to enter the Palestinian territories.

Tlaib's office did not immediately respond to Elite Daily's request for comment on Israel's decision.

Both Omar and Tlaib have come under fire for alleged anti-Semitic remarks in the past. In February 2019, Omar drew criticism for suggesting that the American Israel Public Affairs Committee (AIPAC) was paying American politicians to support Israel, which many saw as tying into anti-Semitic tropes about Jewish conspiracy. Omar later shared an "unequivocal" apology on Twitter in which she promised to listen and learn. Tlaib, who is of Palestinian descent, drew controversy in May 2019 for statements in which she described thinking about the aftermath of the Holocaust as something that gave her a "kind of calming feeling" due to what she saw as Palestinians' role in providing a "safe haven" to surviving and displaced Jews. Tlaib later said her words were twisted and misconstrued.

More recently, the two congresswomen have made headlines over tensions between them and President Trump. On July 14, Trump penned a controversial tweet which suggested The Squad, which consists of Omar, Tlaib, Rep. Alexandria Ocasio-Cortez of New York, and Rep. Ayanna Pressley of Massachusetts, should "go back and help fix the totally broken and crime infested places from which they came." All four congresswomen are U.S. citizens, and all save Omar were born in the United States. The White House did not respond to Elite Daily's request for comment at the time.

Judging by Trump's tweet, tensions between the president and the congresswomen aren't dying down anytime soon. In fact, I think this is probably going to get worse before it gets better.