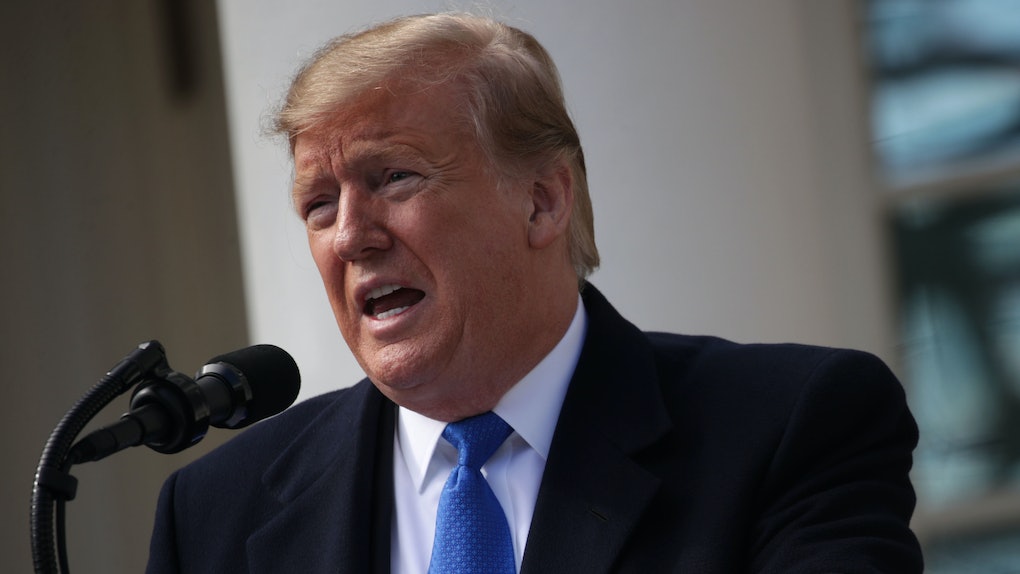 We're probably entering double-digit territory for how many times President Donald Trump has blasted Democrats. Regardless, this time, the commander-in-chief is calling out the group due to a new round of investigations it has launched into his personal, business and political life. And Trump's response to House Democrats' investigation into him took aim at everyone from "Crooked Hillary Clinton" to House Judiciary Chairman Jerry Nadler. Elite Daily reached out to the White House for additional comment, but did not hear back by the time of publication. Representatives for Nadler did not immediately respond to Elite Daily's request for comment.

Trump's response follows Nadler's March 4 announcement that Democrats would be launching an investigation into the president and his affairs, including his White House campaign, presidential transition, administration, and businesses. While it's clearly far-ranging, the investigation could lay the groundwork for a potential future impeachment argument, should House Democrats choose to pursue that option. The same day, the House Judiciary Committee requested documents from 81 sources, including people who are connected to the White House, the Trump Organization, and the Trump campaign, per USA Today. The requests appear to be part of an effort to get a closer look at a number of controversial subjects, including possible collusion between Russia and the Trump campaign in the 2016 election; the firing of former FBI Director James Comey; the payment to Trump's alleged mistress Stormy Daniels to keep her quiet ahead of the election (Trump denies the affair, but admitted to reimbursing his former lawyer for a payment to the adult film star); and any possible abuses of power by Trump.

Responding to the probe on March 5, Trump wrote that Democrats are ramping up their investigations "now that they realize the only Collusion with Russia was done by Crooked Hillary Clinton & the Democrats." He went on to call Nadler and other House Democrats "CRAZY," accusing them of harassing "innocent people" and committing "the greatest overreach in the history of our country."

The investigation comes as FBI Special Counsel Robert Mueller's investigation into possible collusion between Trump and members of the 2016 Trump campaign reportedly draws to a close, and on the heels of a congressional testimony by Trump's former lawyer and fixer Michael Cohen. During his Feb. 27 appearance on Capitol Hill, Cohen made some damaging claims against the president, including alleging that Trump had knowledge of the infamous WikiLeaks release of Democratic emails during the 2016 election cycle, including those of his rival Hillary Clinton, which many have said were damaging to her campaign. The White House did not respond to Elite Daily's request for additional comment on the subject at the time, although in a statement provided to Newsweek, White House Press Secretary Sarah Sanders said that it was "laughable that anyone would take a convicted liar like Cohen at his word." The former lawyer also described Trump's alleged involvement in the hush money scandal, providing a check to lawmakers that he claimed "Mr. Trump wrote from his personal bank account after he became president." The White House did not respond to Elite Daily's request for additional comment at the time.

While Nadler said in a March 3 appearance on ABC's The Week that it's too soon to call whether impeachment will happen, he claimed that in his opinion it is "very clear" that Trump has obstructed justice. According to CNN, he said:

It's very clear — 1,100 times he referred to the Mueller investigation as a witch hunt, he tried to — he fired — he tried to protect [former national security adviser Michael] Flynn from being investigated by the FBI. He fired [former FBI Director James] Comey in order to stop the Russian thing, as he told NBC News. ... He's intimidated witnesses, in public.

Oof. The White House did not immediately respond to Elite Daily's request for additional comment on Nadler's claim.

With Democrats coming down like this, it seems almost certain that Trump's Twitter fingers are about to be a lot busier. Stay tuned for what's next.