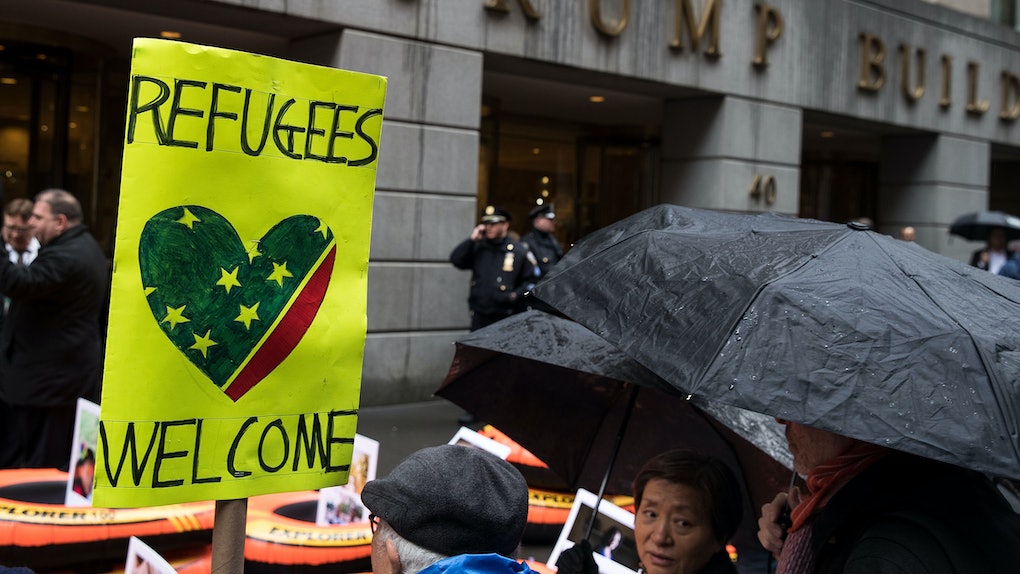 One of President Donald Trump's chief campaign promises — a ban on all Muslims entering the United States — has once again been defeated, at least for now. On Oct. 17, a day before it was meant to take effect, a federal judge struck down Trump's latest travel ban executive order, the third since he took office in Jan. 2017, saying it "plainly discriminates based on nationality." This is the same judge who ruled against the second version of the ban.

The newest version of the travel ban was issued on Sept. 24, in anticipation of the second version's expiration, and it is by far the strictest version of the executive order thus far. Called the "Presidential Proclamation Enhancing Vetting Capabilities and Processes for Detecting Attempted Entry Into the United States by Terrorists or Other Public-Safety Threats," the third executive order blocks or restricts travel for people from Chad, Iran, Libya, North Korea, Syria, Venezuela, and Yemen. Additionally, Iraq is mentioned separately in the order as facing "great screening security," but no entry restrictions. Sudan, which was part of previous iterations of the ban, has been removed. Many of the countries listed are Muslim-majority nations, while others, like North Korea, are countries Trump has a personal vendetta against.

Which is why Judge Derrick Watson, U.S. District Judge for Hawaii, determined that the new version, despite narrowed down language chock-full of legalese, is discriminatory and, ultimately, unconstitutional. It is, per Watson, "dangerously flawed." (His order temporarily stops the ban for all countries listed, except for North Korea and Venezuela.)

Judge Watson's opening statement (which you can read in full on Mother Jones) compared Trump to professional athletes in a scathing reference to the president's recent fight with NFL players protesting police brutality.

"Professional athletes mirror the federal government in this respect: they operate within a set of rules," Watson's opinion reads, "and when one among them forsakes those rules in favor of his own, problems ensue. And so it goes with EO-3."

Watson argued that the third executive order, though using slightly different language, is, in essence, no different from the first two travel bans. According to Watson, the ruling handed down by the Ninth Circuit in June prevents the Trump administration from meddling in immigration law to the extent that executive order number three proposes. (The Ninth Circuit, according to Politico, blocked the second travel ban, issued in March, for exceeding the president's authority and failing to argue the legal need for a ban.)

Ignoring the guidance afforded by the Ninth Circuit that at least this Court is obligated to follow, EO-3 suffers from precisely the same maladies as its predecessor: it lacks sufficient findings that the entry of more than 150 million nationals from six specified countries would be "detrimental to the interests of the United States," a precondition that the Ninth Circuit determined must be satisfied before the Executive may properly invoke Section 1182(f) [the section of the U.S. code regarding "inadmissible aliens"].

In short, Trump must prove that admitting people from the countries listed in the order would be detrimental to the United States, whether by making the country vulnerable to terrorism or other sabotage. Watson believes that the administration has failed to prove that detriment.

That said, Watson's decision isn't final: the Trump administration can — and probably will — appeal the decision, as they did in June. Though, unlike the June appeal, several experts believe that the third executive order has a higher likelihood of being heard by the Supreme Court — which allowed a partial ban for 90 days while determining whether or not to hear the case.

On CNN, New Yorker writer and legal analyst Jeffrey Toobin posited that the language in the third ban gives it a much better chance of making it to the Supreme Court. He told Brooke Baldwin on Oct. 17 that it is "almost certain" that "travel ban three will be on a rocket ride to the Supreme Court and we will get a resolution one way or another."

Toobin also mentioned the fact that the Supreme Court is much more conservative than federal judges like Watson, so there is a strong likelihood that the third version of the ban might survive, unlike the bald-faced discrimination embedded in the first order.

Trump issued his initial executive order, "Protecting The Nation From Foreign Terrorist Entry Into The United States," on Jan. 27, 2017, a week after he took office.

That ban — which blocked entry to the U.S. for citizens of seven Muslim-majority countries — was swiftly stopped by a federal judge, which led Trump to tweet angrily that the decision would lead to "big trouble" and "death and destruction." He then issued a second version in March.

Trump has also called the ban a Muslim ban, which strengthens Judge Watson's argument that every iteration of the ban, no matter how much the administration tailors the language, discriminates based on religion and nationality.

Even with the Dept. of Justice arguing on behalf of the ban, it's going to be hard to argue that the order isn't discriminatory, given that the president has been flapping at the mouth about political correctness. Oh, and the pesky little detail that, during his campaign, he explicitly promised to prevent "Muslim immigration."

But hey, maybe it really is about safety.