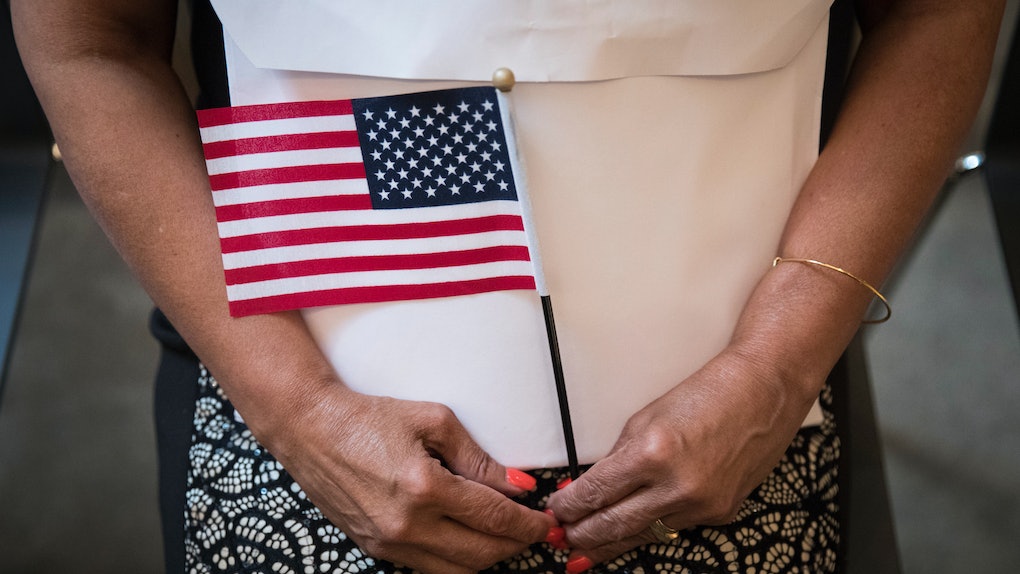 President Donald Trump's immigration policies have been the subject of controversy as of late. Attorney General Jeff Sessions announced the enforcement of the administration's new "zero tolerance policy" along the southern U.S.-Mexico Border in April, and the consequences that came from enforcing this law have sparked mass public outrage. Although the president and members of his cabinet tout detention centers in a positive light, a new report from BuzzFeed News claims that Trump's detention centers are denying pregnant women medical care, adding yet another problematic layer to Trump's immigration policy agenda.

According to the report published on July 9, five women who’ve been in U.S. Immigration and Customs Enforcement (ICE) detention and Customs and Border Protection (CBP) custody while pregnant were reportedly denied proper medical care when they showed obvious symptoms of miscarriage, and officials were reportedly not able to provide or unwilling to provide the women with the medical attention they needed. One woman traveling to the U.S. from El Salvador to seek asylum claimed that she suffered a miscarriage while in a detention center and said that officials in charge of the center wouldn't take care of her. Other women have recounted alleged incidents of abuse toward pregnant women from CBP officials, even when the officers reportedly knew that the women in question were pregnant.

Elite Daily reached out to ICE and CBP, as well as the Department of Homeland Security (DHS) for comment. While the DHS did not comment at the time of publication, a spokesperson for CBP referred questions to their National Standards and stated that most detainees were only in CBP custody for under 72 hours. A spokesperson for ICE provided a statement regarding the medical care that's provided to women in their detention centers. The statement reads,

U.S. Immigration and Customs Enforcement (ICE) is committed to ensuring the health, safety, and welfare of all those in our care. In accordance with ICE’s rigorous performance-based national detention standards, all woman up to age 56 are screened for pregnancy shortly after being processed into the agency’s detention facilities... In addition to pregnancy screenings at intake, ICE detention facilities provide onsite prenatal care and education, as well as remote access to specialists for pregnant women who remain in custody.

The statement also claims that ICE provides all detainees who are pregnant with appropriate care, which "includes referral to a physician specializing in high-risk pregnancies when high risk pregnancy is indicated."

The report from BuzzFeed News paints a very different picture. One of the women that spoke to the media outlet, identified as "E," claimed that an official at a detention center told her that the center "was not a hospital and they weren’t doctors," per BuzzFeed News. The woman, who was reportedly miscarrying, allegedly "spent eight days just lying down" without receiving the care that she needed. She reportedly lost her unborn child, and wound up accepting voluntary departure and was deported back to El Salvador.

Trump has claimed that the detention centers under his administration are better than when they were under former President Barack Obama's control. On June 25 at a rally in South Carolina, Trump stated that, "our facilities are cleaner, better kept, and better run."

That is an interesting claim, considering the Trump administration quietly implemented a directive beginning in December 2017 that allows pregnant women to be detained. The policy was publicly announced on March 29, despite it already being in practice for nearly three months. Prior to this policy change, ICE was not permitted to detain pregnant women except in extreme situations or circumstances, under an Obama-era directive. A statement to Elite Daily at the time said that ICE would not detain a woman in her third trimester unless there were "extraordinary circumstances," and that the facilities would provide prenatal care and access to medical specialists.

This isn't the only Trump immigration policy change that's received tons of backlash. The president's "zero tolerance policy" has resulted in the separation of children from their families when attempting to cross the U.S. border, which has been widely regarded as a human rights violation by the United Nations and other humanitarian organizations and governments.

These detention centers aren't visible to the public, so it's difficult to definitively say if Trump's statements are true or not. However, this latest report is definitely concerning and difficult to read. Yet another troubling report out of the Trump administration's immigration policies.