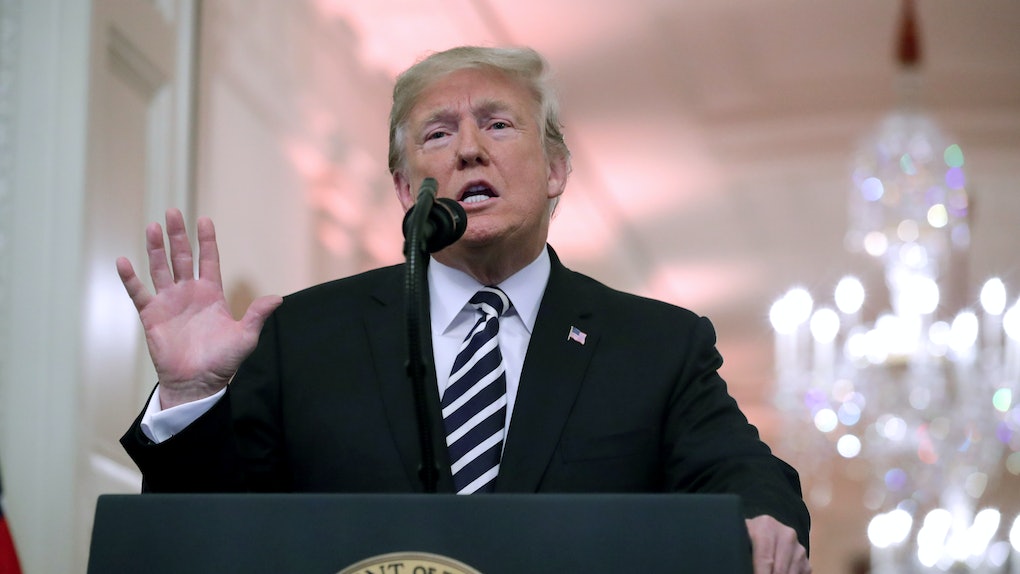 If you’re worried about the 2020 election, this might not help. During a Sept. 23 press conference, President Donald Trump refused to promise a peaceful transition of power should he lose the upcoming 2020 election, per The New York Times. Claiming that mail-in ballot fraud could corrupt the voting system, Trump then went on to state how there would be no power transfer at all — but a “continuation” of power. The White House did not immediately respond to Elite Daily's request for comment on the remarks.

When asked whether or not he would facilitate a “peaceful transferral of power” if Democratic candidate Vice President Joe Biden wins the election, Trump at first delivered a non-committal response: “We’re going to see what happens.” He then proceeded to condemn the use of mail-in ballots, stating, “the ballots are a disaster. ... Get rid of the ballots and you’ll have a very peaceful — there won’t be a transfer, frankly. There will be a continuation.” For months on end, Trump has baselessly criticized the mail-in voting method as a corrupt, fraud-ridden system that will render tainted or false results.

There’s no precedent for a U.S. president who refuses to step down. In the case of a contested election, the Supreme Court would likely weigh in, much as the court did following the disputed Bush v. Gore election in 2000. However, in light of Ruth Bader Ginsburg’s recent death, any Supreme Court decision could be tied 4-4, should the remaining seat stand empty.

Despite Trump’s condemnations, voting by mail is both safe and reliable. In fact, the president himself has voted by mail on at least three separate occasions, as confirmed by a Snopes fact-check. Critics are worried by Trump’s apparent efforts to cast doubt upon the legitimacy of the election, perhaps allowing him to more easily dispute the results should he lose to Biden in November. Barton Gellman from The Atlantic writes, “If the vote is close, Donald Trump could easily throw the election into chaos and subvert the result. Who will stop him?”

Political opponents challenged Trump over the comments. In a statement shared with Elite Daily, the co-chairs of the Democratic Attorneys General Association suggested that they would challenge Trump, should he refuse to step down. “Democratic AGs know how to take Trump to court and win. We are more than prepared to do so again,” wrote Massachusetts AG Maura Healey and Oregon AG Ellen Rosenblum.

Rep. Ilhan Omar of Minnesota, a progressive Democratic congresswoman known as a member of The Squad, also cited her own experiences as a child refugee from Somalia. “As a little girl, I witnessed what happens when you do not have a peaceful transfer of power,” she wrote in a tweet. “It leads to instability, violence, and sometimes war. For the first time, I fear that could happen in this country, and it’s gonna take all of us to prevent it.”