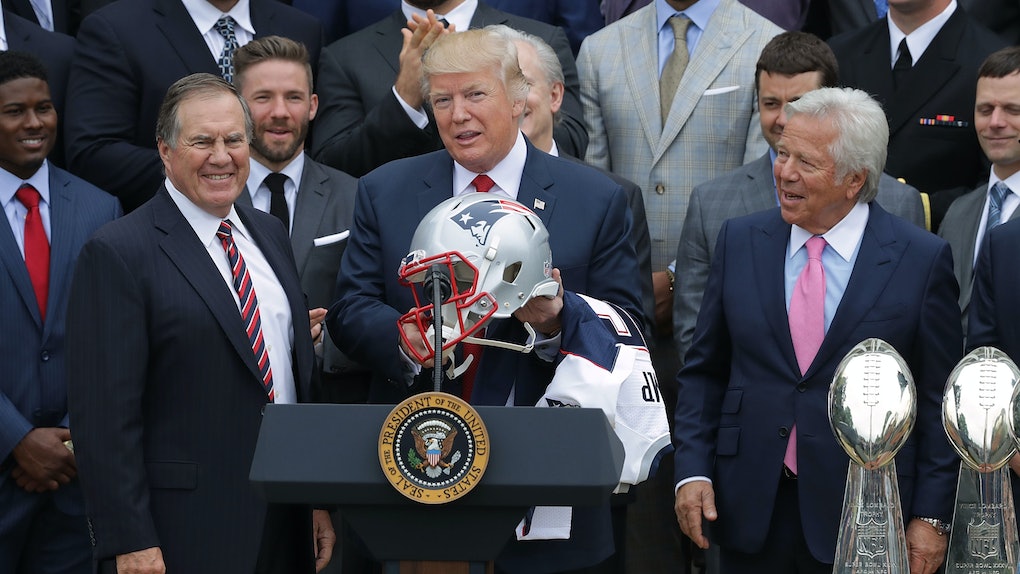 Trump Tweets About NFL After League Decides Not To Punish Kneeling Players, Because Of Course

On Wednesday morning, Oct. 18, President Donald Trump criticized the NFL on Twitter for not punishing players who kneel during the national anthem. A day before, a meeting between a group of owners and players took place at the league's headquarters in Manhattan, and did not produce any new rule prohibiting protests during the pre-game playing of the anthem. In response to the league's decision to avoid a new anthem-specific rule, Trump's tweet about the NFL on Wednesday read,

The NFL has decided that it will not force players to stand for the playing of our National Anthem. Total disrespect for our great country!

After Trump aired his feelings about the league and its meeting with players, Sports Illustrated reporter Albert Breer shared what he says is the perspective of league owners regarding the president's impact the president on the NFL.

So the hope of many here at the league meetings is that tweets like this have lost their shock value, and teams/players can ignore them.

Breer is one of a number of NFL insiders who reported on the meeting between owners and players this week.

What happened during the NFL meeting?

Here are the details on how things went down at the NFL's headquarters on Tuesday, according to Sports Illustrated.

Thirteen players met with 11 team owners at the league's Park Avenue office for about four hours, alongside league commissioner Roger Goodell and DeMaurice Smith, the NFL Players' Association president. During the meeting, owners and players didn't even debate the subject of a new rule concerning a player's right to kneel during the national anthem.

Instead the discussion within the league has shifted focus to issues players say they are trying to bring attention to via protest, SI reports. After the meeting, the 11 owners traveled to a different Manhattan site, where they met with the remaining group of team owners for their regularly scheduled owners meeting.

I think everyone’s looking at it like that. And I think the vast majority of the players that were there today said, ‘We now have attention, we have the spotlight, but that’s not what we’re trying to accomplish. We want to accomplish real change.’ And I think if there’s real sincerity on both sides, which there certainly seems to be coming out of today, we can take protests and turn them into progress.

York's team employed Colin Kaepernick last season and, just a few weeks ago, featured a group of players who kneeled during the national anthem before a game against the Indianapolis Colts on Sunday, Oct. 8. The players' decision on that day prompted the departure of Vice President Mike Pence, who later announced via Twitter why he chose to leave the game, writing,

I left today's Colts game because [the president] and I will not dignify any event that disrespects our soldiers, our Flag, or our National Anthem.

President Trump would soon after say that he'd asked Pence to leave the game in the event that players kneeled.

I asked @VP Pence to leave stadium if any players kneeled, disrespecting our country. I am proud of him and @SecondLady Karen.

A week before league owners met with players, Trump erroneously claimed that the league had decided to formally demand all players stand during the national anthem. The league would eventually correct the president in a statement that read,

Commentary this morning about the Commissioner's position on the anthem is not accurate. As we said yesterday, there will be a discussion of these issues at the owners meeting next week.