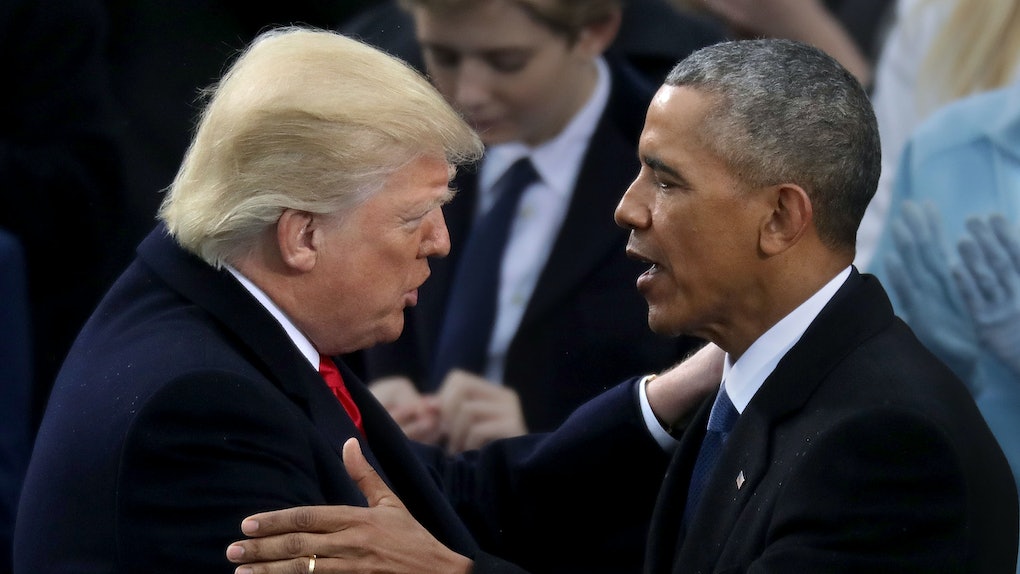 In September 2016 — two months before the presidential election he'd end up winning — Donald Trump admitted that then-President Barack Obama was born in the United States, contradicting years of conspiracy theory mongering about the authenticity of Obama's birth certificate. Now that Trump's in the White House, however, an apparent 180-degree turn has taken place. Trump still pushes the Obama birth certificate conspiracy, just in private now.

Those private doubts from Trump were detailed by The New York Times on Tuesday, Nov. 28, in story written by veteran reporters Maggie Haberman and Jonathan Martin. According to the report, White House advisers said Trump has used private conversations in recent months to spout already-debunked conspiracy theories. Those theories include the one about former President Obama's citizenship and the false claim that Trump lost the 2016 popular vote to Hillary Clinton because of widespread voter fraud.

The Times also reported that a U.S. senator who asked not to be named is among the people to whom Trump has spoken about these conspiracies. One senator who did talk to the Times on the record is Republican Jeff Flake, one of a number of GOP congressman who has been critical of Trump.

"It’s dangerous to democracy; you’ve got to have shared facts," Flake told The New York Times. "And on so many of these, there’s empirical evidence that says no: You didn’t win the popular vote, there weren’t more people at your inauguration than ever, that was your voice on that tape, you admitted it before."

"That tape" is, of course, the infamous Access Hollywood footage that shows Trump talking about groping women. In recent days, reports say Trump has cast doubt on the authenticity of the tape in multiple private conversations throughout the year, adding to the list of conspiracies the president apparently discusses behind closed doors. The reports of Trump's doubts about the tape come despite the fact that he apologized for the words he could be heard saying on the footage, and defended it as "locker room talk."

"That was locker room talk. I’m not proud of it," Trump during the second presidential debate in October 2016. "I am a person who has great respect for people, for my family, for the people of this country. And certainly, I’m not proud of it. But that was something that happened. If you look at Bill Clinton, far worse. Mine are words, and his was action."

During a press briefing on Monday, White House Press Secretary Sarah Huckabee Sanders was asked whether Trump accepts the authenticity of the Access Hollywood tape. She answered without confirming what the president's belief is.

"Look, the president addressed this," Sanders said on Monday. "This was litigated and certainly answered during the election by the overwhelming support for the president and the fact that he's sitting here in the Oval Office today. He's made his position on that clear at that time, as have the American people and his support of him."

After reports of the president's doubts, and Sanders' evasiveness on Monday, Access Hollywood itself went out of its way to push back against any doubt about the show's footage.

"We wanted to clear something up that has been reported across the media landscape," host Natalie Morales told viewers during the Monday night broadcast of the show. "Let us make this perfectly clear — the tape is very real. Remember his excuse at the time was 'locker-room talk.' He said every one of those words."

Despite the show's statement, The New York Times still reported that the president is "not sure," and told a senator before inauguration that "we don’t think that was my voice."

The tape and Obama's birth certificate are just two of the multiple things President Trump reportedly does not believe, despite vast evidence that contradict his doubts.