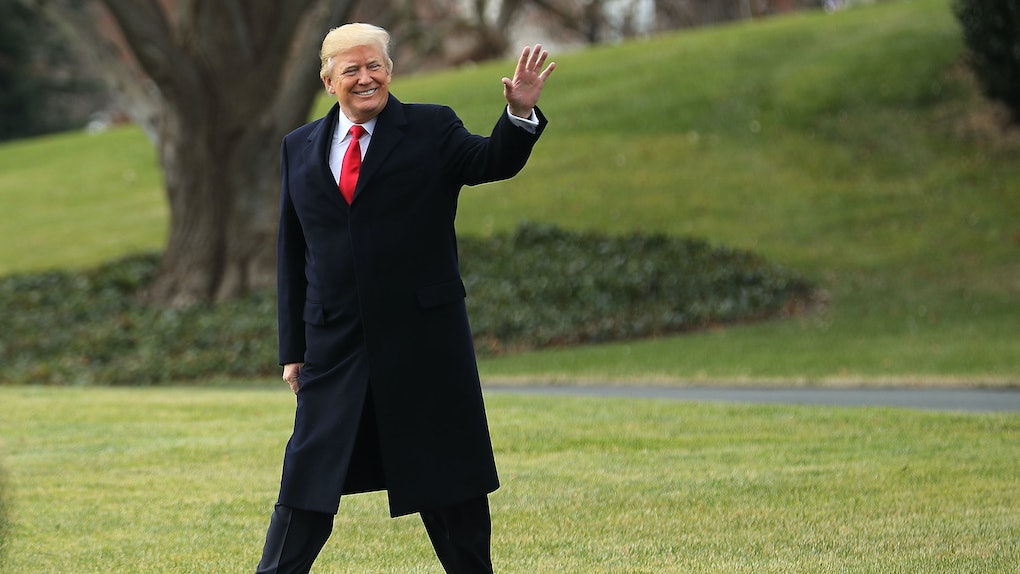 The new year might be another tough one for fact-checkers, if 2017 is any indication. In a report published Tuesday, Jan. 2, The Washington Post found that in his first 347 days in office, President Donald Trump made false claims 1,950 times, averaging about 5.6 claims per day. The count included any falsifications and misleading statements.

The statements were measured since Trump was inaugurated on Jan. 20, 2016. The less-than-accurate remarks were made consistent throughout the year, and The Post's graphic shows how certain events on the timeline aligned with large spikes in the occurence of false claims. For example, just prior to the GOP's attempts to repeal the Affordable Care Act (ACA) in August, the number of claims Trump made peaked to its highest level of the year.

The Toronto Star reached a slightly different number, with a final tally of 1,012 for the year, working out to an average of 2.9 falsehoods per day. But even at a difference of 900, both figures are still staggeringly high.

Two claims in particular lead the charge, per The Post, as the most-often used by Trump, with their counts tied at 61.

This isn't true, but Trump has harped on this inaccuracy and been peddling it as fact for months now, per The Post. In fact, the healthcare initiative is doing surprisingly well despite the blow it was delivered from the repeal of the individual mandate provision with the GOP's recent tax overhaul. The Star also cites this as one of his most-repeated claims, at 26 times.

Claim #2: Taking Credit for Things That Happened Before His Presidency

The other general trend is what I call the Thank-Me-For-Doing-This category, in which Trump claims him or his administration are responsible for something that actually was initiated before he took office — like that one time when he bragged about fewer airline deaths.

Nope, it's not normal.

It's not just you: The president's knack for tall tales and exaggerations (or outright falsehoods) isn't typical of the Commander-in-Chief. The New York Times found Trump had told six times as many falsehoods in the first ten months of his presidency as former President Barack Obama did in his entire two terms. In a Pew Research poll released in August 2017, it was found that 62 percent of Americans thought "honest" wasn't a good descriptor for the president.

On Twitter, The Star's Daniel Dale, who reported the 1,012 figure, quoted presidential historian Douglas Brinkley, writing, "'We’ve had presidents that have lied or misled the country, but we’ve never had a serial liar before. And that’s what we’re dealing with here.'"

Brinkely isn't alone in his assessment. Robert Dallek, also a presidential historian and author, told Vox that "politicians lie, but this is different," adding that "the shamelessness of this administration, the dishonesty, the total indifference to facts, is something I haven’t seen before — at least not this blatant."

Historians aren't the only ones critical of the trend away from truth. Lawyer and University of New Hampshire professor Seth Abramson, sharing the news on Twitter, wrote, "So if you're a conservative and want to harp on a single statement made by an FBI agent 18 months ago, maybe ask yourself first why these 1,949 lies by the president aren't within your circle of concern."

His claims aren't getting better with time.

Last week proved that the trend is only continuing. The Post's review comes on the heels after a much-publicized interview in which Trump went off script on many topics, adding to his tally. In the impromptu conversation with The New York Times from his Mar-a-Lago resort in Palm Beach Florida on Dec. 28, Trump made 24 false or misleading statements, The Post counted. That's a rate of one every 75 seconds. (He also denied collusion with Russia 16 times in that same interview, so it's impressive that he managed to do both at once.)

For the sake of those whose jobs entail fact-checking the president — or correcting his mistakes — let's hope 2018 isn't as strenuous.

More like this
These Tweets & Memes About Matt Gaetz's Venmo All Make The Same Joke
By Cianna Garrison
The More Contagious B-117 COVID Variant Is Now The Most Common Strain In The U.S.
By Rhyma Castillo
What Is Taco Bell's Times Square Digital Cantina? It's A Unique Experience
By Lara Walsh
Stay up to date