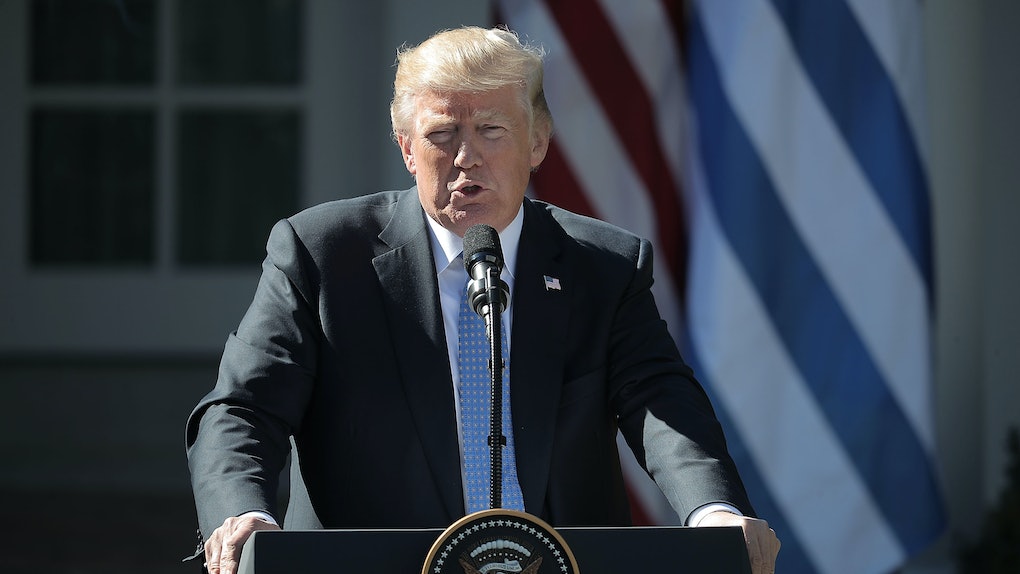 Days after the administration announced it was cutting health subsidies that cover low-income individuals, the White House is sending mixed messages about its decision. On Oct. 17, a pair of bipartisan senators struck a deal with a proposal to fund cost sharing reduction (CSR) payments under the Affordable Care Act (ACA), also known as Obamacare. The president's comments in response to the deal suggest that Donald Trump supports an Obamacare CSR plan, even though he got rid of the payments in the first place.

In a press conference in the White House Rose Garden on Tuesday, Trump suggested that he backed the deal and added that he ultimately supports a Republican plan to give states block grants to determine their own health care systems. “Yes, we have been involved and this is a short-term deal because we think ultimately block grants going to the states is going to be the answer," he said.

Sens. Lamar Alexander (R-Tenn.) and Patty Murray (D-Wash.) made a deal earlier that day to extend the subsidies for the next two years, while providing states with “meaningful flexibility" to make changes to insurance plans through waivers, Sen. Alexander told reporters, according to The Washington Post. The deal would both allow the subsidies to continue and give states greater freedom for their systems.

But Trump himself is the one who made Congress scramble for a solution. Only five days before voicing support for the plan, on Oct. 12, Trump said that he would cut the CSR payments entirely, which could hurt insurance markets in a big way. Without the subsidies, which are expected to cost $9 billion next year, premiums could climb sharply. Then, insurance companies might leave the Obamacare exchanges, according to The New York Times.

Before Trump said he would cut the subsidies, he issued an executive order that could relax requirements on certain health plans and make it easier to get short-term health insurance. The order both directed federal agencies to assess how to make purchasing association health plans easier for small businesses, and to make cheaper and skimpier short-term health plans easier to buy for individuals. This means that those with fewer health needs might leave the ACA's insurance exchanges, driving up the costs for those who are older and sicker.

The president's decisions to cut the CSR payments and issue the executive order appeared to be part of a larger effort to erode President Barack Obama's signature health legislation.

In a joint statement on Oct. 12, Senate Minority Leader Chuck Schumer (D-N.Y.) and House Minority Leader Nancy Pelosi (D-Calif.) condemned Trump's decision to cut the subsidies. "It is a spiteful act of vast, pointless sabotage leveled at working families and the middle class in every corner of America," the pair said, according to CNN.

The White House's efforts to dismantle Obamacare came after Senate Republicans failed to repeal the ACA during the budget reconciliation process, when they would have only needed 50 votes for it to pass. Still, Trump's administration has employed other tactics to impact the ACA, such as shutting down the Obamacare website during the open enrollment period. This was met with a lot of criticism.

For those who see the proposal and Trump's support as a glimmer of hope, Republicans haven't actually indicated that they're willing to support the deal.

“That will be his challenge, how much is enough? I can’t support the payments until you get some reform, but I realize that for the base, it’s going to be about not keeping Obamacare in place,” Sen. Lindsey Graham (R-S.C.) told reporters, according to The Washington Post.

The bill might be bipartisan, but it sure doesn't sound like Republicans are going to reach across the aisle.