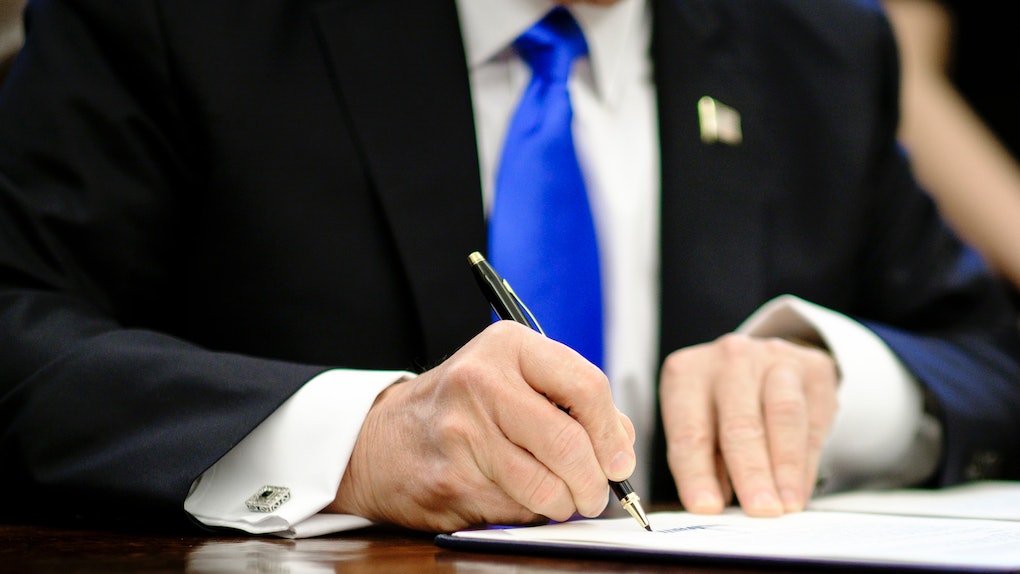 Trump Approved A National Park For Martin Luther King Jr., But It's Complicated

Representative (and civil rights icon) John Lewis (D-GA) sponsored the bill. "I am so proud that we were able to work in a bipartisan, bicameral manner to establish Georgia’s first National Historical Park in Dr. King’s name and legacy before what would be his 89th birthday and the 50th anniversary of his tragic assassination," wrote Lewis on Twitter.

To clarify, Trump didn't create a new site to honor the leader. According to USA Today, the bill he signed expands the boundaries of the existing Martin Luther King Jr. National Historic Site in Atlanta, Georgia, upgrading it to national park status. Now a national historic park — a first for Georgia — the site will include Prince Hall Masonic Temple, a building that served as headquarters for the Southern Christian Leadership Conference, which King founded.

Trump signed the bill aboard Air Force One on Monday while in Atlanta for the college football championships, according to CNN. There to watch the moment in action was the civil rights leader's niece, Alveda King.

"Through his life and work, Dr. Martin Luther King Jr. made America more just and free," said White House deputy press secretary Hogan Gidley on Monday aboard the plane. "This important historical park tells his story, and this bill will help ensure that the park continues to tell Dr. King's story for generations to come."

The responses on social media were mixed.

When CNN's Jake Tapper shared the news on social media, some were less than praising of Trump. "Did someone force him," one user commented in response to Tapper. Others warned how the president's signing the bill could be misconstrued.

"This is misleading," wrote another user in a reply. "The property was already the MLK Historic Site. This bill simply redesignates the existing MLK historic site as a park and slightly expands the borders of the site to include additional buildings. It doesn’t create anything new in Dr. King’s honor."

Trump and Lewis have some beef, and Atlanta isn't down.

It's surprising that the law went through so smoothly given the history between Trump and Lewis. Almost exactly one year ago, on Jan. 14, 2017, Trump threw major shade at Lewis in Twitter rant.

"Congressman John Lewis should spend more time on fixing and helping his district, which is in horrible shape and falling apart (not to .... mention crime infested) rather than falsely complaining about the election results. All talk, talk, talk - no action or results. Sad!" wrote then president-elect Trump. "Congressman John Lewis should finally focus on the burning and crime infested inner-cities of the U.S. I can use all the help I can get!"

Just a few days after that, Trump returned to the platform to blast Lewis over the inauguration, which Lewis boycotted.

And just last month, Lewis refused to attend when Trump was scheduled to visit the Mississippi Civil Rights Museum, Politico reports, calling it "an insult" to the African Americans the museum commemorates.

Apparently, Atlanta hasn't forgotten what Trump said about it — or Lewis. On Monday, Jan. 8, when the president was in town to attend the college football championships, he was met with protests and boos by some, according to CNN.

And Lewis seems to be skirting the feud with Trump entirely — refraining from mentioning the president in either his tweet or his statement. "@repjohnlewis avoids mentioning Trump by name in statement celebrating his MLK park bill getting signed into law by the president," wrote reporter Tamar Hallerman on Twitter.

But apparently Lewis and Trump were able to set aside their differences to enact the legislation. As for whether Trump's signing the bill will help smooth things over with Atlanta is still up in the air.