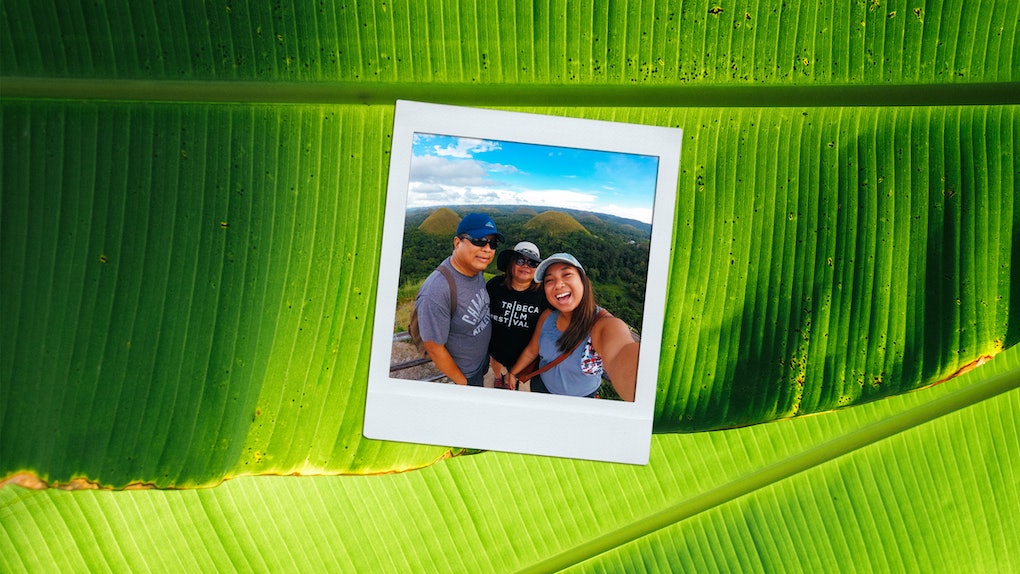 Growing up as a first-generation Filipino in America, life wasn't always the easiest. I knew from a very young age that I was different; I didn't see people who looked like me on TV or in movies or books. In school, I didn't feel as beautiful as my Caucasian classmates. Strangers and friends have asked me questions like, "What are you?" and "Where are you really from?" and "Do you speak 'ching chong'?" my whole life. Despite these hurtful and ignorant comments, I've tried my best to be a proud Filipino, even if it hasn't always come easily. But when I was 22, I took a trip back to the Philippines with my parents. Seeing their journey and knowing the sacrifices they made gave me a new appreciation for what it means to be proud of who I am.

I grew up in Tampa, Florida, in a mostly Caucasian neighborhood where there were so many things about my childhood that highlighted how different my upbringing was from everyone else's. For starters, my parents were the only ones who hadn't been born in the United States. At school, my classmates ate sandwiches in the cafeteria for lunch while I ate rice and stews like sinigang (a signature Filipino tamarind stew) and chicken adobo (a Filipino staple served in a pungent sauce made of vinegar and soy sauce) in thermoses that smelled "funky" (by other kids' standards). I vividly remember some of my classmates picking up their things and moving away to avoid the smell.

Even though we grew up in the states, my siblings and I still had typical Asian childhoods. My parents were very strict — academics were our first priority, I participated in every extracurricular activity imaginable, we didn't have cable TV or internet, and I wore a uniform to school even though it wasn't required. (My parents both wore uniforms through college, as did all of my cousins.) My playdates were limited (and had a pretty extensive vetting process), and sleepovers were never allowed. Even though I was young, I was hyperaware of the fact I was being raised much differently than my classmates.

Because of that, I argued with my parents often. I felt like they'd made me the "weird, nerdy, antisocial girl" in my school. When they told me they'd grown up the exact same way and that they'd turned out OK, I didn't believe them. They told me I shouldn't compare myself to everyone else because we just did things differently in our household, and that I'd thank them for all of the lectures and rules when I got older. I have the clearest memory of yelling back at them, "Well that's not how things are done in America!"

They wanted us to achieve the 'American Dream,' which to them meant that we could do anything we put our minds to, and that it was possible for us to be successful in any field we chose.

It's been a very long time since we've had one of those arguments, and though I didn't realize it at the time, I know now how much those words hurt them. They moved to the United States to give my siblings and me opportunities to create and live lives we were proud of. They wanted us to achieve the "American Dream," which to them meant that we could do anything we put our minds to, and that it was possible for us to be successful in any field we chose. But the constant clash of culture between what I experienced at home and what I thought childhood was supposed to be like made it very difficult for me to be proud of who I was.

As I got older, I started to care less that my lunches smelled different than my classmates', or that I dressed a little more conservatively than they did, or that as a high schooler, I still wasn't allowed to go to sleepovers or wear makeup to school. Watching Filipinos represented on TV — like Jasmine Trias and Ramiele Malubay on American Idol and Jake Zyrus on Glee — gave me a sense of indescribable pride I'd never felt before. I found a friend group in high school that, even though they didn't entirely agree with the rules I had to live with, never judged me and made an effort to understand me.

I had spent so many years ashamed of who I was when I had absolutely no reason to be.

Coming into my own made me realize that eventually I wanted to see the Philippines the way my parents saw it.

Traveling as much as I could post-college was a huge goal of mine, so I booked a trip with my parents back to the Philippines, thinking we could explore together. I knew the trip would be different than the first three times I'd been (when I was 2, then again when I was 3, and more recently when I was 15) because I could understand and speak the language better than I had when I was younger. Together, my mom and I planned an itinerary that would show me parts of the country I hadn't visited yet, and we scheduled a mix of beaches, cities, and incredible, once-in-a-lifetime experiences to enjoy as a group, such as swimming with whale sharks, relaxing at a resort island close to Cebu, and taking a road trip through Bohol.

On the way to my family's home in Manila, I saw girls walking home from college wearing uniforms and midi-length skirts in 95-degree heat without a drop of makeup on their faces. When I went to the pool with my cousins, kids wore T-shirts and shorts in the water, not bathing suits. When we dined at restaurants, people proudly ate with their hands no matter how messy or smelly it was, unaware and unbothered by what the people next to them would think.

The things I saw in the Philippines had made me feel so different and so embarrassed in the United States. But here, that behavior was so normal. I had spent so many years ashamed of who I was when I had absolutely no reason to be.

Seeing how people lived in the Philippines woke me up to how good I had it in the United States, and that all of the things I considered "problems" throughout my childhood — such as my "stinky" lunches, no sleepovers, and even the uniform I wore until the seventh grade — paled in comparison to what life in the Philippines was like for these young people and for how my parents grew up.

Everyday conveniences we enjoy in the United States, like WiFi and shower heads, aren't always accessible in the Philippines. My parents and I stayed at my grandmother's place in Manila where you tabo to shower, which means you fill up a bucket with cold water and use a pitcher to pour it over your body to clean yourself.

We also got stuck in a storm and had to wait a few hours for the street flooding to die down before we could drive again. These were all normal things my parents dealt with growing up, while I thought that not being able to wear makeup to high school was the end of the world.

This trip also marked the first time I'd ever been on a motorcycle, even though it's a primary mode of transportation in the country. Growing up, my dad told me stories of shenanigans on his motorcycle, like the time he (unsuccessfully) tried to jump over a gap in a bridge with his best friend, my ninong (godfather), and the time he tried balancing groceries on his handlebars. It was so much fun experiencing something new and seeing how happy it made him to share such a special part of his life with me.

I swam with butanding (whale sharks), and took in the views at Tumalog Falls, which looks like Avatar IRL. The amazing part about doing these things was that my parents hadn't ever done them either — they felt a little more adventurous because I was there, and I'll never forget sharing these firsts together.

Visiting for four weeks helped me embrace all of the Filipino mannerisms I've since grown to love. Filipinos love pointing with their mouths — they say doon (or "over there") while making a little kissy face and nodding in the general direction of what they're talking about. Rice cookers are mandatory in every household. Everyone reuses everything, including plastic cutlery and grocery bags. It's tradition to take your shoes off before entering the house and to wear chinelas (slippers) inside.

I used to think these things were just quirky things my parents did, not realizing these habits were part of my culture. I loved seeing how other families made these Filipino traditions their own, from having matching chinelas for everyone in the family to having ornately-decorated rice cookers with painted flowers (my parents had always opted for simpler black or stainless steel cookers in our home).

I now find so much beauty in my features — my wider nose, almond-shaped eyes, full lips, and dark hair — because they show the world who I am before I say where I am from.

Returning to the Philippines with my parents made me so happy they'd prioritized raising my siblings and me with Filipino beliefs and culture in mind. I owe my dedicated work ethic, love for my family, respect for my elders, and flavorful cooking to my parents and our culture. And while there are so many parts of my childhood I thought made me weird, I realize now they made me unique.

It was also so special to discover new parts of the country alongside my parents. I've had a ton of life-changing travel experiences since this trip, but sharing these firsts with them tops my list of the most memorable ones by far. Even now, a couple of years later, we look back on the trip fondly and have bookmarked the places we want to revisit again soon. They've even mentioned bringing my boyfriend along so we can share these beautiful experiences with him, too.

My heritage is often something I talk about with people I'm meeting for the first time. Now, instead of being embarrassed by it, I joke about wearing a uniform through sixth grade. I am proud of how hard I worked to get straight As in school. As an editor and writer, I try to use my platform to talk about my upbringing and share my uniquely Filipino stories so other first-generation Filipino girls who are bullied because of their "funky" lunches understand they're not alone. I now find so much beauty in my features — my wider nose, almond-shaped eyes, full lips, and dark hair — because they show the world who I am before I say where I am from.

Spending so much time Philippines, getting to see a new side of my parents, and finding a new appreciation for the way they raised me has changed my life. Now, when I say I am a proud Filipino, I know exactly what that means.

More like this
Contiki's 'Bridgerton'-Inspired Mini Break Journeys Through The Show's Film Sites
By Rachel Chapman
Will BTS' Camping Collection Restock? Here's What To Know About The Helinox Collab
By Marisa Casciano
Away's Travel Accessories Collection Brings Comfort To You In Any Destination
By Marisa Casciano
Stay up to date