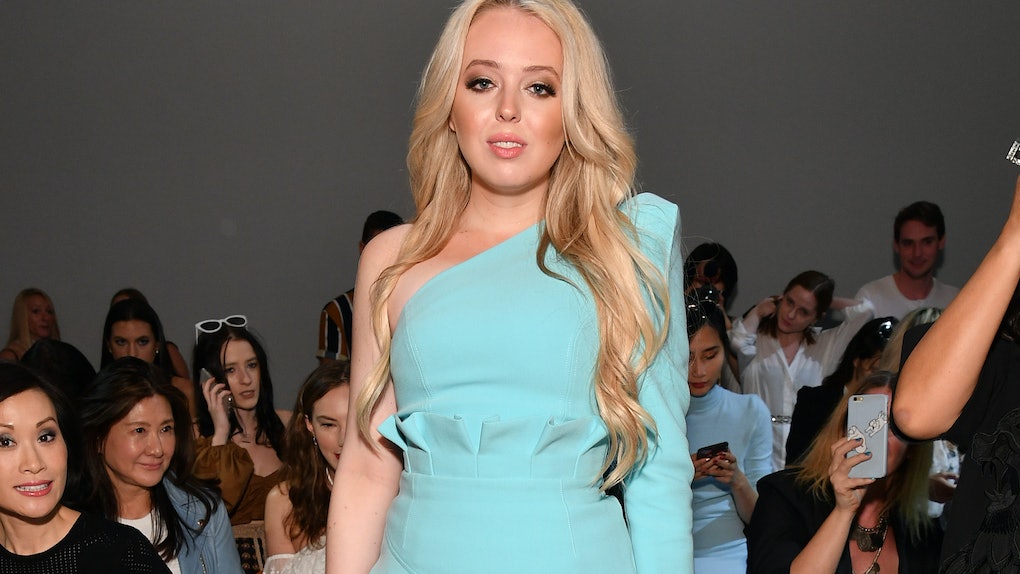 On Presidents Day 2019, Tiffany Trump took a moment to share a social media shout-out to the 45th commander-in-chief: Her father, Donald Trump. On Monday, Feb. 18, the Georgetown Law student penned a brief but touching message to the current president in honor of the holiday in addition to a slideshow of photos that were all about family. Tiffany Trump's President's Day Instagram message for her dad touched on some of the biggest moments of Donald Trump's time in office and featured cameos from her siblings and First Lady Melania Trump, as well as former President Barack Obama and Michelle Obama.

Compared to her half-siblings Ivanka Trump and Donald Trump Jr., the 25-year-old tends to shun the spotlight and rarely makes political statements on social media or otherwise. However, on Monday, Tiffany took to Instagram to pen a short but sweet message praising her father for his presidential career thus far.

"Happy Presidents’ Day, Dad! I love you so much and we are so proud of you! @realdonaldtrump."

The most meaningful part of the message was its visual accompaniment, which included six photos of the Trump family from important moments in the president's last few years in the Oval Office.

In the first photo, Tiffany can be seen posing with her father and First Lady Melania Trump, while a second image (taken from Trump's inauguration on Jan. 20, 2017) shows the law student hugging her father to congratulate him. Melania Trump, Ivanka Trump, and Donald Trump Jr. can also be seen in the photo, as well as the Obamas and Joe Biden.

The throwback third image showed the Trump family dressed to the nines while hitting the campaign trail back in 2016, followed by another photo from the president's inauguration.

Tiffany Trump finished off her slideshow with a photo of her and half-sister Ivanka Trump standing in front of a plane as well as a photo, taken from Donald Trump's vantage point, of the entire family beaming at the president during the 2019 State of the Union address on Feb. 5.

While Ivanka Trump and the first lady failed to post anything on Monday, Trump Jr. also took to the social media platform to recognize his father on the holiday, which commemorates the birthday of George Washington. Sharing a photo of President Trump sporting a red MAGA and posing with three of his grandchildren, he wrote:

Brother Eric Trump shared a similar message, writing "Happy Presidents’ Day, Dad. We all love you very much! @realdonaldtrump#MakeAmericaGreatAgain," along with a slideshow that included images of his wife Lara and their son, and well as several family photos. Ivanka's husband Jared Kushner and Trump Jr.'s girlfriend Kimberly Guilfoyle were also depicted in the post.

Meanwhile, the president spent most of the holiday tweeting about collusion. Referencing a Fox & Friends news analysis on the long-running investigation regarding possible collusion between the Trump 2016 presidential campaign and Russia, which the president has often referred to as a "witch hunt," he wrote:

"'This was an illegal coup attempt on the President of the United States.' Dan Bongino on @foxandfriends True!"

Trump also addressed the annual holiday on Instagram and Twitter, telling his followers, "Hope you are enjoying your President’s Day, our Country is making unprecedented progress!"

Judging from the Trump siblings' posts, it appears that the overwhelming theme of the day was family, and it's just further proof that the president definitely has his kids in his corner.