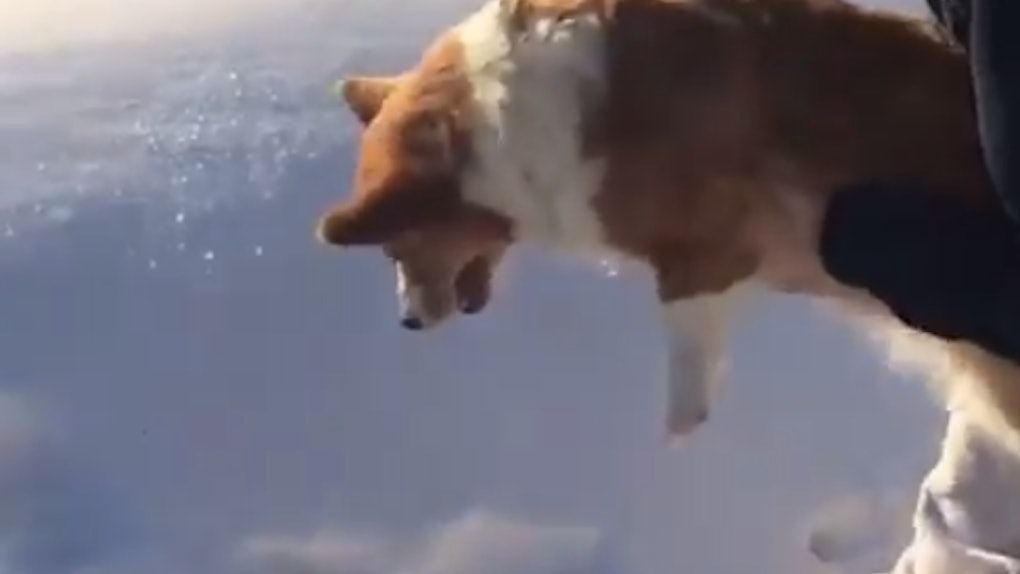 Oftentimes, I find myself worrying about animal morale... especially when it comes to dogs. Is that bulldog wearing a tutu on Instagram actually having a good time in spite of her straight-faced expression? Is the trembling Chihuahua in the park truly living his best life? The fact that dogs could secretly be stressed out keeps me up at night, and it's an extremely hard concept for me to fathom. If you haven't already seen it, this video of a corgi being thrown into the snow definitely had me worried... until I saw his reaction at the end, of course.

I'll start this out by saying I have never been skydiving in my entire life. And until I somehow obtain a lot of money (and also my own health insurance), I probably won't be paying to jump out of a plane anytime soon. But Instagram user @KarmatheeCorgi had the wild experience of what I initially thought was skydiving, and my heart skipped like, 10 beats. Did Karma sign a liability waiver for this? Will the parachute, in fact, deploy as expected? The little corgo has no clue what's about to happen upon being catapulted through the air, and TBH, I initially skyrocketed to a whole new level of concern. Watch the entire video below, and see the daring move for yourselves.

OK, OK. So I may have been overreacting about the entire thing... and I definitely assumed the absolute worst. It deceivingly appeared that Karma was being thrown into an endless abyss, which definitely led me to experience some major light headedness and an overwhelming amount of anxiety. But as I continued watching, I felt immediate relief... because I realized that Karma was actually just tossed into the snow. And TBH, it is crystal clear that the pup got a total kick out of it. Just look at the super loving way Karma runs back to the owner, attacking them with love and sleeve tugs. Alas, my nerves are calm.

If you are super down to check out more of this hella happy corgi, take a look at the rest of Karma's Instagram. There are several photos of Karma showing adorable owner love, straight up cheesin', and even a few showing a very loving relationship with a cat (because even a feline couldn't hold back from loving an adorable little corgi). Aside from Karma's impeccably brave skydiving video, there are many other great vids... so following the account is an absolutely fantastic decision. Definitely show that IG love.

If you weren't already convinced that corgis are literally a gift from the heavens, check out these corgis that are way cooler than you and I combined. Some are absolute models, others wear outfits way more adorably than I could ever dream of wearing, and a few are sassy AF. I was totally put into my place after looking at some of these stunners. There is seriously no denying that corgis are everything anyone ever needs — and even when they aren't skydiving, they're still making great feats as gracefully short-legged creatures.

As I am quite often concerned for the well-being of doggos, Karma's leap into the snow certainly had me sweating. But after taking in the rest of the glorious video, it is quite clear that Karma seriously had the experience of a lifetime. Karma's bravery and resilience definitely deserves a million IG likes and follows, and if you're super down with the breed, definitely look at all of the corgi photos. There is truly no such thing as too many corgis in this world, so actively seeking them out is definitely a wise choice.