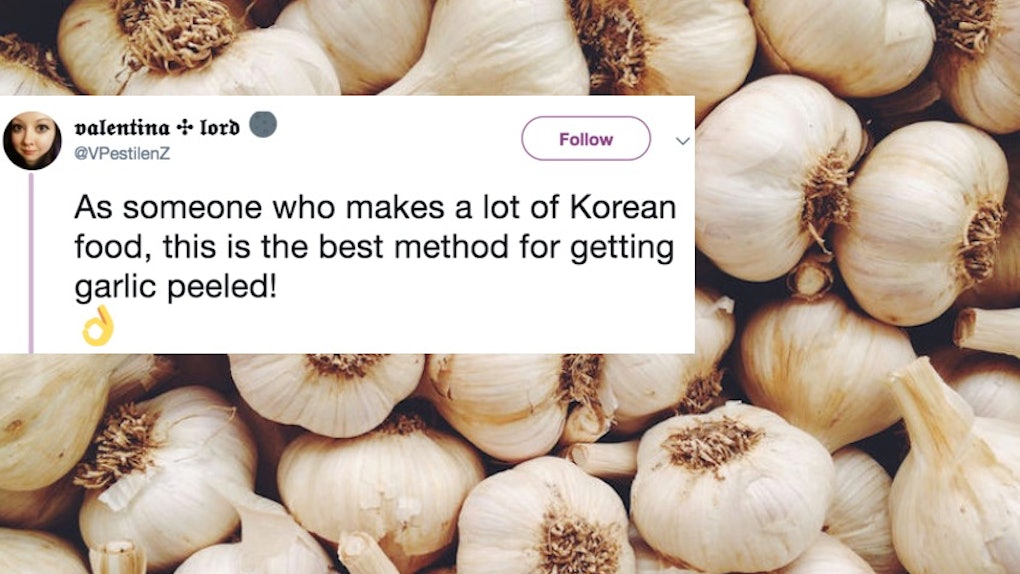 In my opinion, there's no "easy" way to peel garlic. If you're anything like me, there are usually stray peels scattered across the kitchen counter amongst haphazard piles of cloves by the time you're done. (TBH, I usually opt for ready-to-go cloves to avoid the mess, but that's not the point.) If you understand the struggle, then you might want to check out this viral tweet about peeling garlic. It features a garlic-peeling technique that's leaving Twitter completely shook — and once you see it for yourself, you'll want to try it ASAP.

The impressive tweet — which was shared by Twitter user @VPestilenZ on Sunday, June 16 — has already accumulated over 300,000 Twitter "likes" and over 100,000 retweets. The tweet itself features a video of someone peeling a bulb of garlic with ease using a sharp object of some sort (some people think it's a knife, and others think it's a pair of scissors). In the footage, the person on camera uses the utensil to poke each clove before pulling it through the peel without a struggle. It's a flawless process that leaves them with two organized piles: one for the peels and one for the cloves.

Twitter user @VPestilenZ captioned the video, "As someone who makes a lot of Korean food, this is the best method for getting garlic peeled!"

As you can see, whoever's on camera is a garlic-peeling professional. With a few easy pokes and pulls, they have a pile of cloves that are ready to go. I'm shook, you guys.

If you're also impressed by the revolutionary garlic-peeling method, you're certainly not alone. In fact, people across the internet (including celebrities) are totally in awe of the video. Tons of people are appreciative of the tip, and others are completely shocked by the cooking trick.

Some folks can't believe they've never tried the hack before (I haven't, either).

The technique is "genius."

"This kind of info exchange is why the internet exists," one Twitter user said.

People are beyond grateful.

Others are using GIFs to express their disbelief.

Some Twitter users want to try the peeling trick ASAP.

As you can see, tons of people across the web are equally thankful and impressed by the garlic-peeling hack — celebrities included. Chrissy Teigen, cookbook author and supermodel, even commented on the trick. In one tweet, she responded with, "WHAAAAAAAAAAAAAAAT."

As you could imagine, a handful of these impressed Twitter users have already given the hack a try. Some of 'em successfully peeled their garlic, and others are still trying to perfect their techniques. (I'm sure it's way harder than it looks).

If you'd rather skip the peeling process, you can always opt for pre-peeled cloves instead (that's something I'd probably do). But if you're inspired to peel 'em by yourself using the viral technique, go for it. Please be careful, though.

More like this
This Virtual Tour Of Starbucks' Costa Rica Coffee Farm Is An Immersive Experience
By Lara Walsh
What Does Twizzlers' Mystery Flavor Taste Like? It'll Keep You Guessing
By Cianna Garrison
Here's How To Enter Panera's Bread Bowl Bike Sweepstakes For A Sweet Ride
By Daffany Chan
Stay up to date