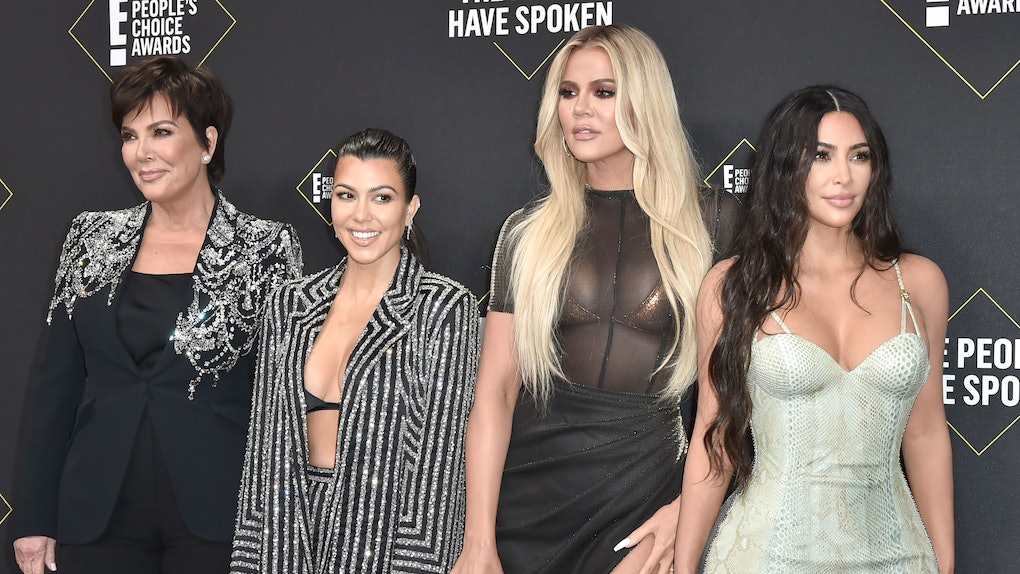 Another day, another viral moment from the Kardashians. The reality-TV family has mastered the art of consistently making headlines, while simultaneously managing to avoid nearly all bad press (a balancing act not many celebs of their caliber can pull off). They had an off day on Nov. 14, however, when the trailer for the Nov. 17 episode of Keeping Up With The Kardashians was released. The new video of the Kardashians having a food fight has the internet so upset.

At any given moment, the internet feels some type of way about a celebrity for different reasons, some good, and some not so good. But, in this case, the internet has a point. Food fights are wasteful, and, yes, the Kardashians probably should have known better. They tossed around a lot of food here, y'all. Between the mass amount of pasta salad flung across the room, and the full plate of salad that wound up on the floor, the food fight got a little out of control. Even Khloé herself was a little upset with the way things went down.

"Am I bothered by this food fight right now? Who the f*ck wouldn't be bothered by this? This is in any normal person's world bizarre, disturbing, and unacceptable," she said in a confessional.

She seemed genuinely annoyed. "Don't. If anyone's comfortable like this, I want to question them, this is no way to live," she added.

But no one was more upset than fans who watched the teaser. They took to the comments section to shame the Kardashians for their wasteful ways.

"All I can think about is how many hungry kids we have in this world and y'all throwing food around SMH There is other things to throw around besides food," one person said.

"A lot of people have no food 🥘 and you are just wasting it 😭😭," another comment read.

"Shame on all of you , people would give their right arm for that food!! Disgusting," another fan wrote.

"That’s very insensitive!! There’s ppl that can barely afford to have breakfast," said another.

"So many people without having anything to eat and you play with food that way saddens me because I admired them so much," one comment read.

However, some came to the Kar-Jenners' defense, tweeting that fans were being way too dramatic about the food fight.

"Jesus people are going to complain about a FOOD FIGHT. The kardashians had talking about there are people starving. Like you never had a food fight in elementary middle school shit high school ?" one fan wrote in a tweet.

"Wow! Never seen anybody complain about food fights in films or other tv shows but because its the kardashians its a big problem!" another wrote.

Watch the video for yourself below.

It's unclear whether Khloé was upset about the wasted food, or over getting pasta salad on her athleisure, but all will be revealed when the new episode airs Sunday, Nov. 17.

More like this
Shanna Moakler's Instagram Comment About The Kardashians Is Peak Shade
By Candice Jalili
TikTok's Trailblazers: These Creators' Ideas Went Viral Without Them & It Needs To Stop
By Brandy Robidoux
Khloé Kardashian's Response To Her Unretouched Bikini Photo Leaking Gets Honest
By Brandy Robidoux
Stay up to date