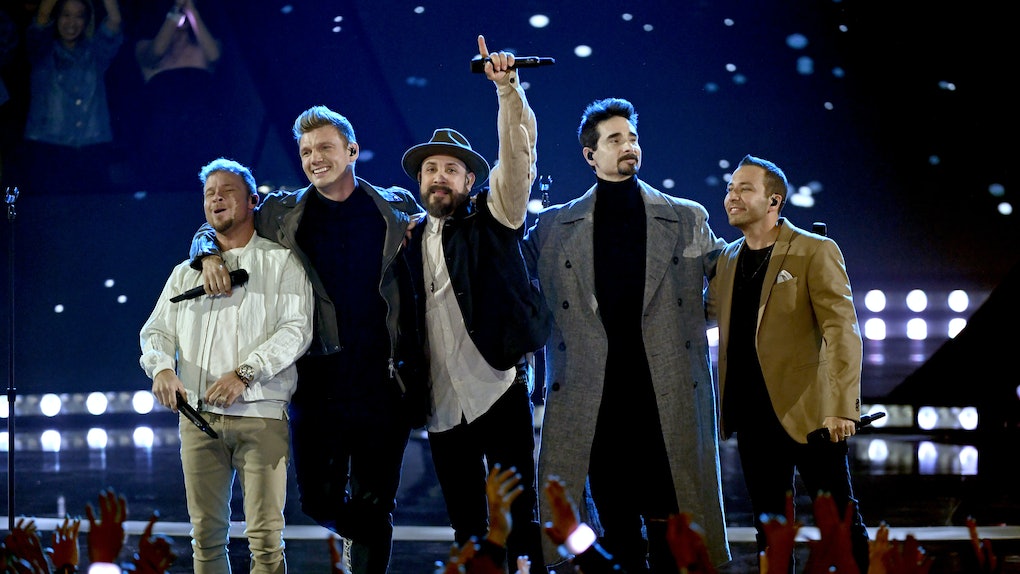 I am overwhelmed. You guys... I am... over... whelmed. Being a Backstreet Boys fan has been the journey of an actual lifetime. The group, who has now been together for 25 years, just closed their two-year residency in Las Vegas and it feels like the '90s are coming to an end all over again. Say it ain't so, AJ. Don't go! As part of their final performance, the gang brought their spouses up on stage in a romantic rendition of one of their best hits. The video of the Backstreet Boys Singing "Shape Of My Heart" to their wives is genuinely romantic AF and their die-hards are loving it.

When we talk about comebacks, from now on, let's all agree to exclusively be referencing Britney Spears and BSB. It's totally fair to say there was a big chunk of time when it looked like the gang was never going to get back on their feet. It wasn't the guys' fault. That is just the usual trajectory of a '90s boy band. You can only body roll so far, ya know?

However, when BSB launched their Larger Than Life concert tour in March 2017, it was like Kevin, Howie, Brian, Nick, AJ, and all of their fans were given a second chance at — I don't know, life? Joy? Staring at Kevin's cheekbones? What was meant to be a few test shows eventually became a two-year residency at Planet Hollywood’s Zappos Theater in Las Vegas and a historical notch on the men of BSB's career belt.

When it came time to sing their iconic love ballad in the final show, the guys switched things up. Entertainment Tonight notes that during "Shape Of My Heart" the gang usually would pull audience members or guests of note up on stage with them. However, this time, they gathered up their stunning wives. AJ McLean, 41, walked with his wife, Rochelle, to the stage first. They were followed by Nick Carter, 39, and his wife of five years, Lauren. Next came Howie Dorough, 45, and his love, Leigh, followed by Kevin Richardson, 47, and his wife, Kristin. Last but not least, Brian Littrell, 44, and his wife Leighanne brought up the rear as they handed roses out to audience members on their way to the stage,

I must admit it, I am fascinated. It is such a wild thing to look at your teenage idols as grown men with spouses. I'm equal parts happy for them and still secretly holding out for Kevin one day. (Sorry to my own husband. Teenage crushes run deep.)

At the end of serenading their wives, Howie exclaimed, "Give it up for our wives, ladies and gentlemen! They are the true backbones of the Backstreet Boys.”

ET reports Nick explained, “Vegas has changed the Backstreet Boys’ lives," and he isn't wrong. I can see it from here. Congratulations on an amazing run guys, and say hi to your wifeys for me!

More like this
The Best Movie Soundtracks Were So Good, They'll Live On Forever
By Brandy Robidoux
The 'Glee' Cast's Tribute To Naya Rivera At The 2021 GLAAD Media Awards Was So Moving
By Abby Monteil
Taylor Swift & Olivia Rodrigo's Friendship Timeline Will Make Your Heart Grow 3 Sizes
By Brandy Robidoux
Stay up to date