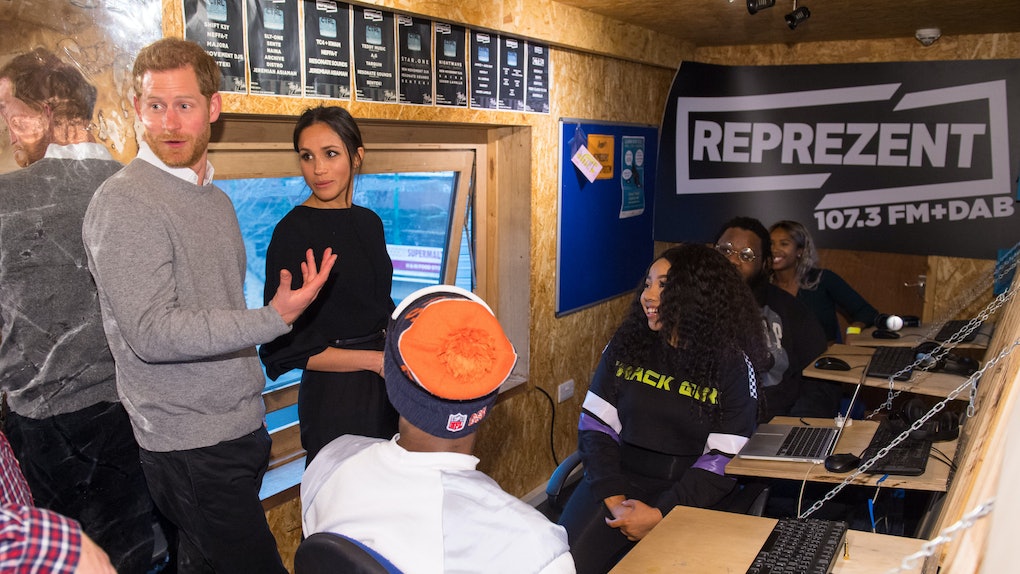 Some people really know how to market themselves. We all know someone from college who took every opportunity they had to shamelessly plug the latest project they were working on, and yeah it was annoying as hell sometimes, but it also worked most of the time. So this DJ who met Prince Harry and Meghan Markle 100 percent knew what he was doing when he made his pitch to be the DJ at the royal wedding. This video of Prince Harry getting a DJ's card for his wedding is seriously hilarious and will no doubt remind you of someone you knew in college who took every chance they had to market themselves. Hey, you gotta do what you gotta do, right?

Prince Harry and Meghan Markle made an appearance at POP Brixton to meet with radio show Reprezent 107.3 FM. It's a super popular show with younger demographics in London, so they wanted to learn more about it. As they were leaving, everyone in the radio station was lined up to say goodbye to the couple. As they walked by, one DJ handed Prince Harry his business card. Harry looked it over for a second wondering what it was, then the DJ, Jevanni Letford, pipes in and says, "DJ at your wedding!" You can see Harry and Markle cracking up at the gesture as they walk out of the station.

Honestly, this guy is a genius.

And he's still plugging himself on Twitter to better his chances of actually booking this gig! I stan a legend.

Letford (who's 28) created a petition in the hopes of increasing his chances of actually DJing the wedding. He's calling it #JevanniLetfordRoyalWeddingDJ, and it kind of has a nice ring to it... I don't know if royal weddings allow DJs or have a strict rule that demands, like, a full orchestra or something, but I really hope this guy gets to DJ the wedding.

Letford told BuzzFeed News he was "overcome with the confidence" to slip his business card into Prince Harry's hand as they were leaving the station. He said, "I always carry my cards with me in case of an opportunity and in the moment I was overcome with the confidence to call Prince Harry’s name and present my business card to him." He said of the royal couple's visit to their show, “It was great meeting the couple of the moment, albeit brief, it was clear that they really appreciated the work that we are doing at Reprezent Radio. They were really engaging.”

He said he wasn't nervous to do it, but was shocked that Harry actually kept it. “I wasn’t nervous at all," he said, "But was surprised when he took it and put it in his pocket! Meghan seemed to appreciate the gesture as well.”

And you already know he has a song in mind for their first dance.

Letford told BuzzFeed News, "As the first dance is special, I would obviously let them tell me what they want to have. If, however, I was able to choose a song for them, it would probably be Luther Vandross and Beyoncé, 'The Closer I Get To You.'" Guys... do you think Beyoncé will be invited to the royal wedding?! Does Meghan Markle know her?! Does Prince Harry know JAY-Z?! I suddenly really need this to be a thing!! Woo, sorry, I got a little carried away there! Beyoncé just does that to me. Anyways...

We can't get over how perfect it is that Meghan Markle wore a messy bun to her Reprezent appearance. Just look at this bun in all its messy glory!!

I weep. Thank you for this, Meghan. Now please book Jevanni Letford as your wedding DJ.