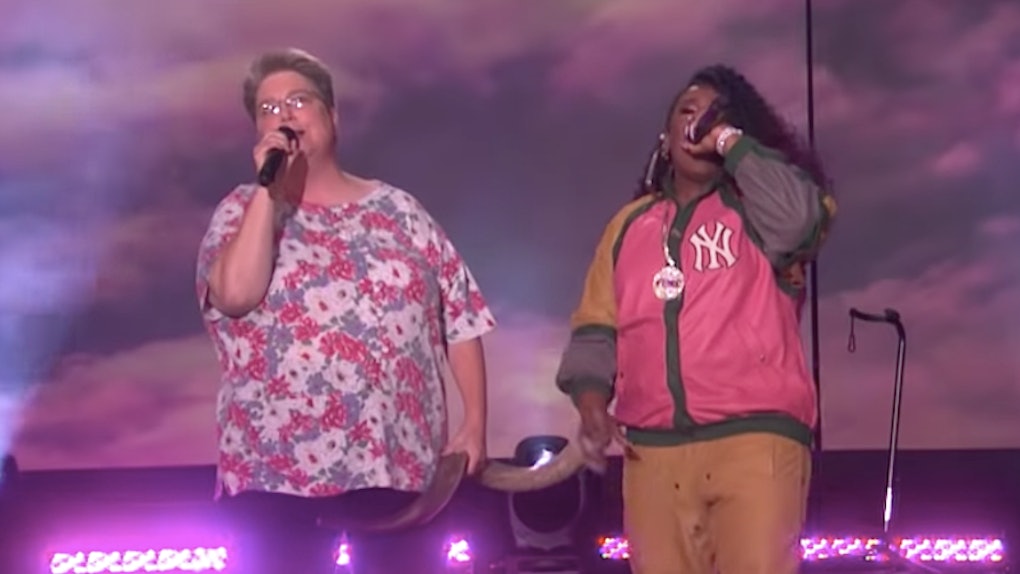 Mary Halsey went viral after a video of her doing karaoke to Missy Elliot's "Work It" in her hometown was posted online. Her video went so viral, in fact, that Ellen DeGeneres brought her onto The Ellen DeGeneres Show like she does with the stars of lots of viral videos. And in classic Ellen form, she brought out the rapper herself to perform "Work It" with Halsey, and the video of Missy Elliot surprising her "funky white sister" on Ellen is the uplifting sh*t I like to see!

The video of Halsey jamming to "Work It" first went viral in August and made its way into Missy Elliot's life. The rapper tweeted how much she loved the video on Aug. 8 saying,

I just found out I have a FUNKY WHITE SISTER. forreal doe. & she brought her home girl with her from da hood that keep tip toeing in the background with a plate of food. yo I’m done! but she straight killed 'Work It' sound effects & all. I love it

How can you watch this video and not want to give Mary Halsey the biggest hug ever? The woman is slaying in every sense of the word. We stan a karaoke queen!!

Also, is she carrying an antler? A horn? I don't care. Everything about this is amazing. My favorite part is in the beginning when she says, "Mrs. Funky White Sister is in the PARRRKKKKK!" I would sprint into battle if this woman said this followed by blowing her animal horn. What a battle cry.

DeGeneres got Halsey on the show and immediately asked who the woman roaming around the background of the video was. "Her name is Lynn, and I just met her that day," Halsey said. Iconic. Halsey explained that the karaoke event she performed at is an annual event held in her hometown called "Karaoke Sunday" that has been going strong for 13 years. She said this was only her second time performing, saying she also performed "Work It" for her first performance last year (it didn't go viral that time, unfortunately).

Then they talked about Missy Elliot posting the video and singing Halsey's praises. "I have to sit back, I can't even tell you," Halsey said. "It was a shock. I never expected this. I just put it out there and said, 'Oh, you wanna go viral?' But I never thought it would happen."

Well happen, it did, Mary! And DeGeneres, of course, couldn't let Halsey leave the show without giving a special performance of "Work It." Before she performed, she said that "Work It" has been her go-to karaoke song since 2003 (the song came out in 2002). "I learned it, I read the words, and I studied it, and the reaction that I got was so positive that it became my go-to song. Everybody wants to hear it!"

Including the Ellen DeGeneres crowd! Halsey slays her performance, of course, and then Elliot comes in at about the 3:45 mark.

Also, Kristen Bell is there for some reason? Hi, Kristen!

At first, Halsey doesn't even register the fact that Missy Elliot's voice can now be heard. I'm guessing she probably thought the show turned on the original version of the song at one point, but then Elliot walks out onto the stage and Halsey is straight-up starstruck. Then they finish the song together and it's as majestic as it sounds. This is my new favorite rap duo of all time. Hard stop.