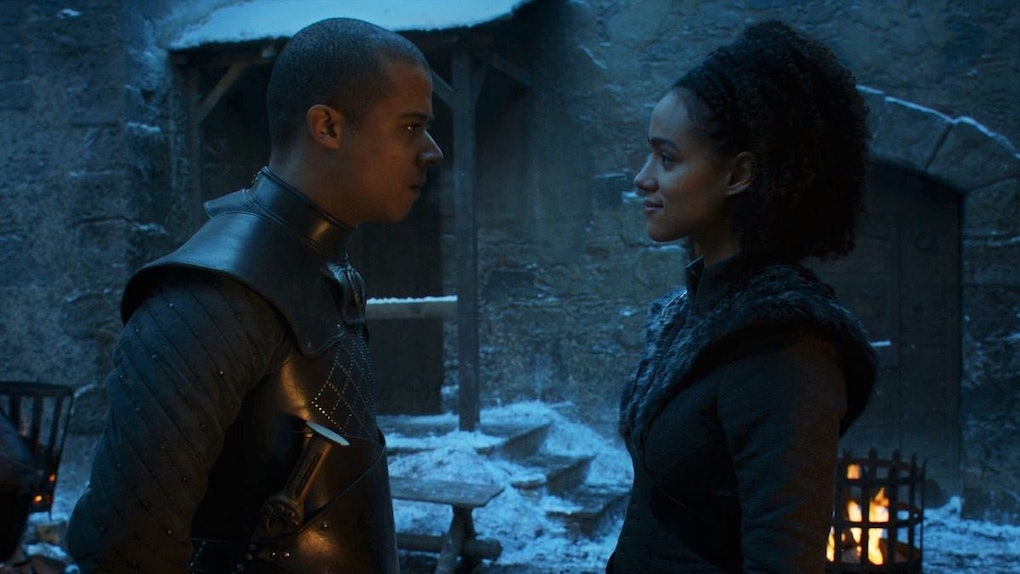 Game of Thrones has never pulled any punches when it comes to breaking the hearts of fans, and in the series' final few episodes are just as devastating as ever. This is the series that brought audiences The Red Wedding, after all, so no character is ever safe. In Season 8, Episode 4, "The Last of the Starks," a fan-favorite character saw an untimely end. But it isn't all doom and gloom coming from the world of Game of Thrones. While their characters are suffering, the series' actors have been sharing some of the fun they had behind the scenes while shooting the show. In fact, this video of Missandei and Grey Worm dancing to "My Boo" while on set is sure to soothe all that ails you. Warning: Spoilers for Season 8 of Game of Thrones follow.

At the end of Season 8, Episode 4, Daenerys and Jon Snow's troops suffer a surprise attack on their way to conquer King's Landing. Most of the characters survive, except for Daenerys' translator and confidante Missandei. Missandei is captured by Cersei's army and, much to the distress of both the characters and fans, is executed. It's tough to watch, especially because the character has always been a positive force on the show. But even though Missandei is gone, the actress who plays her, Nathalie Emmanuel, is alive and well. Jacob Anderson, who plays Missandei's lover Grey Worm – and in real life also raps under the pseudonym Raleigh Ritchie – recently posted a video of himself with Emmanuel on the Game of Thrones set. The video features Anderson (in full Grey Worm costume) singing Ghost Town DJs’ “My Boo” into a megaphone as Emmanuel joins him in doing the Running Man Challenge. It's a much happier version of Grey Worm and Missandei than the one audiences saw in Season 8, Episode 4, and it's worth checking out to help remember happier times.

In the caption for the video, Anderson wrote, "I know it hurts. But Somewhere in the multiverse" and tagged Emmanuel, alluding to the hope that somewhere in time and space their two characters are still happily dancing together.

Emmanuel posted her own tribute to Missandei on her Instagram, expressing her love and respect for her character:

It’s been one of my greatest joys playing Missandei of Naath... The quiet and kind translator. A brilliant woman who overcame so much suffering and found herself, her voice... and her one and only love. She represented so much for me, personally, that I have no choice but to carry the things she has taught me into my life going forward.

It was tough to say goodbye to Missandei, but the truth is that there are likely a bunch more deaths to come. At least as fan deal with the heartbreak of having to say goodbye for more favorite characters, there's always the video of Grey Worm and Missandei dancing to remind everyone of happier times.

The rest of Season 8 of Game of Thrones airs on Sundays at 9 P.M. ET on HBO.

More like this
This 2021 'Game Of Thrones' Season 8 Trailer Is So Confusing... & So Good
By Ani Bundel
Catherine O'Hara's 'Schitt's Creek' Shoutout At The SAG Awards Will Warm Your Heart
By Ani Bundel
Who Is Cleo On 'Outer Banks'? Carlacia Grant Is New To Season 2
By Ani Bundel
Stay up to date