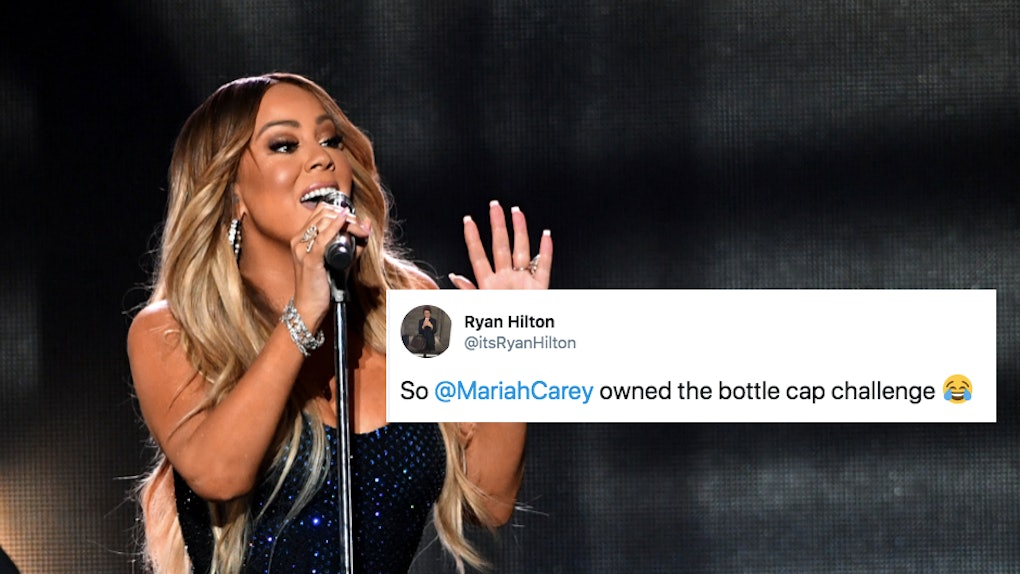 Mariah Carey has officially won the Bottle Cap Challenge, y'all. If you haven't seen the video of her doing it, stop everything; watch it now; and prepare to be pleasantly surprised by her strategy which is unlike anything you've seen from this challenge. This video of Mariah Carey's Bottle Cap Challenge has people on Twitter applauding and celebrating the icon, and for a very good reason.

First, a little bit of background about the Bottle Cap Challenge. The internet challenge, which is not to be confused by the Bottle Flip Challenge, asks participants to unscrew a bottle cap with a swift roundhouse kick. The rules also ask that the person kicking makes the cap come off without moving the bottle itself. Sound like a hard task? It definitely is, which is why some of the most skilled fighters in the world are attempting it. According to Popsugar, the challenge was started on June 25 by Taekwondo instructor and fighter Farabi Davletchin on his Instagram account @farakicks. In the video, Davletchin went in for a roundhouse kick and perfectly unscrewed the lid on a water bottle someone else was holding, thus starting the Bottle Cap Challenge.

If you're thinking to yourself, "OK, I get it, but I just can't imagine Mariah Carey doing that," you're absolutely right. The singer-songwriter may have won the challenge, but she didn't do it by executing the perfect roundhouse kick.

Carey's video starts off with the singer moving her hands in a martial-arts-like fashion, as if she's about to center herself for the kick. But, instead of lifting up another limb, Carey starts singing some very, very high whistle notes and "literally" blows the cap off a bottle. Yep, the pitch of her voice appears to fully make a bottle cap come off the bottle. Now, there was probably some video-editing involved with this magical vid, but it really impresses, nonetheless

Take a look at Carey being her truest self in this video:

Watched this like 100 times and still don’t understand how you did this.

Carey hasn't just been making recent headlines for her Bottle Cap Challenge Twitter video, although it is worthy of all the Twitter applause it's been getting.

Prior to dazzling the internet with her seemingly magical vocal abilities, Carey was being stanned for a Twitter interaction she had with Halle Bailey, the actor who is slated to play Ariel in the upcoming live-action Disney remake of The Little Mermaid. In the midst of casting controversy in which some people pointed to Ariel having pale skin in the 1989 cartoon film, Carey tweeted a congratulatory message to Bailey, writing, "Congratulations Halle!! My kids and I are so excited for the emancipation of Ariel," which was a supportive AF message. Halle tweeted back from her joint account with her sister Chloe Bailey, writing, "omg thank you so much you are forever an inspiration." The Bailey sisters both covered Carey and Miguel's song, "Beautiful," back in 2013.

IDK what Carey has planned for the rest of her summer, but I'm all for continuing to stan a supportive AF queen who can also turn a viral internet challenge on its head with a seven-second video. Can't wait to see what she tweets next!

More like this
TikTok's "Make People Think It's A Photo" Challenge Will Make You Do A Double Take
By Rachel Chapman
The Trendiest TikTok Recipes Of All Time That You'll Want To Taste With Your Buds
By Kelly Pau, Kaitlin Cubria, Marisa Casciano and Rachel Chapman
TikTok's Viral Ranch Pickles Recipe Is A Big Dill, & So Are These Other Pickle Recipes
By Marisa Casciano
Stay up to date