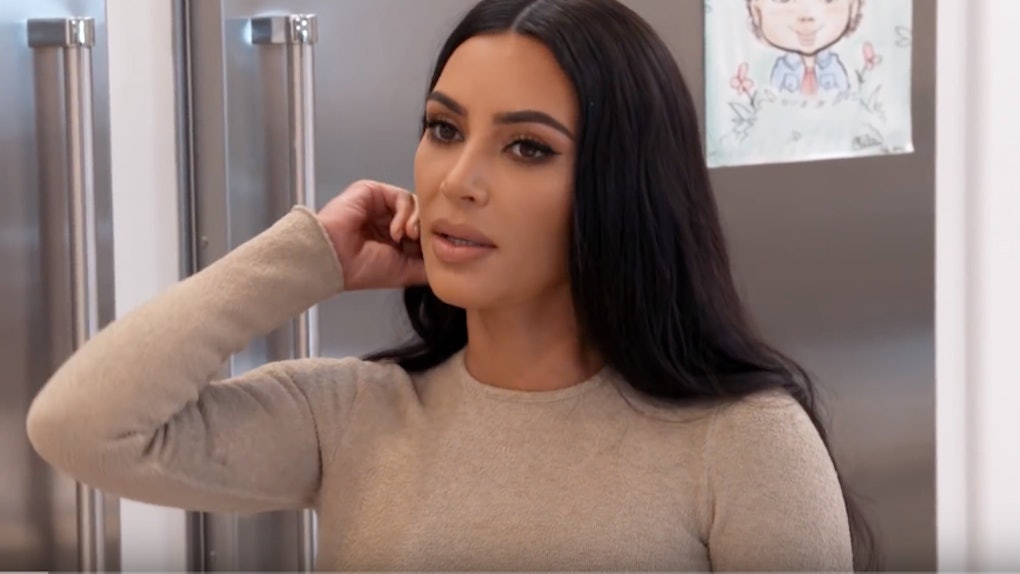 YouTube/Keeping Up With The Kardashians

The 17th season premiere of Keeping Up With The Kardashians ended on quite the cliffhanger. No, not the one that involved Khloé breaking down in tears and running out of her daughter True's first birthday party. I'm talking about Kim Kardashian's potential lupus diagnosis. See, Keeks was having a whole bunch of weird symptoms, and then she tested positive for lupus antibodies. Scary stuff! Her doctor told her it could just be a false positive and that she’d need more testing — and that's where we left off. Have you seen the video of Kim Kardashian finding out if she has lupus from the episode of KUWTK that aired on Sept. 15? It's hella emotional, y'all!

But first, a quick catch-up: During the first episode of season 17, Kim revealed that she hadn't been feeling so great.

"I’ve been feeling so tired, so nauseous, and my hands are really getting swollen," she said. "I feel like I literally am falling apart. My hands are numb."

Later in the ep, her doctor told her she'd tested positive for both rheumatoid arthritis and lupus antibodies. Which is why in episode two, we saw Kim go in for an ultrasound on her hands to figure out what was actually going on.

Unsurprisingly, just the thought of a lupus diagnosis had the reality star totally shook.

"When you do have a diagnosis — or you get tested for something and you get a result that you weren't expecting — you definitely get in your head and for a second you kinda get this little depression of, like, 'OK, what are all of the possibilities that can happen? What's my life gonna look like?" Kim told Entertainment Tonight. "I really wanna be active for my kids, and so it triggers something."

"I really had to get myself together because I do have kids and I do have a family that I just have to be positive and get it together for," she continued. "No matter what's going on in your life, you can take that time to grieve for a second… and then figure out how to be positive about it because it's not going to change. There's no point in being depressed and staying in that headspace, but I felt it for a minute."

Luckily, the final test results revealed that Kim does not, in fact, have lupus. Nor does she have rheumatoid arthritis.

"First of all, if you have any evidence for lupus, we would have screened it," Kim's doctor explained during the Sept. 15 episode. "You do not have lupus and rheumatoid arthritis. So, you can be reassured. You probably have psoriatic arthritis because psoriasis comes and goes. There’s nothing there right now."

Kim went on to reveal to ET that she's on medication now and feeling much better.

"The pain is going to come and go sometimes, but I can manage it," she explained. "This isn’t going to stop me."

Watch the video of her getting her final diagnosis here: