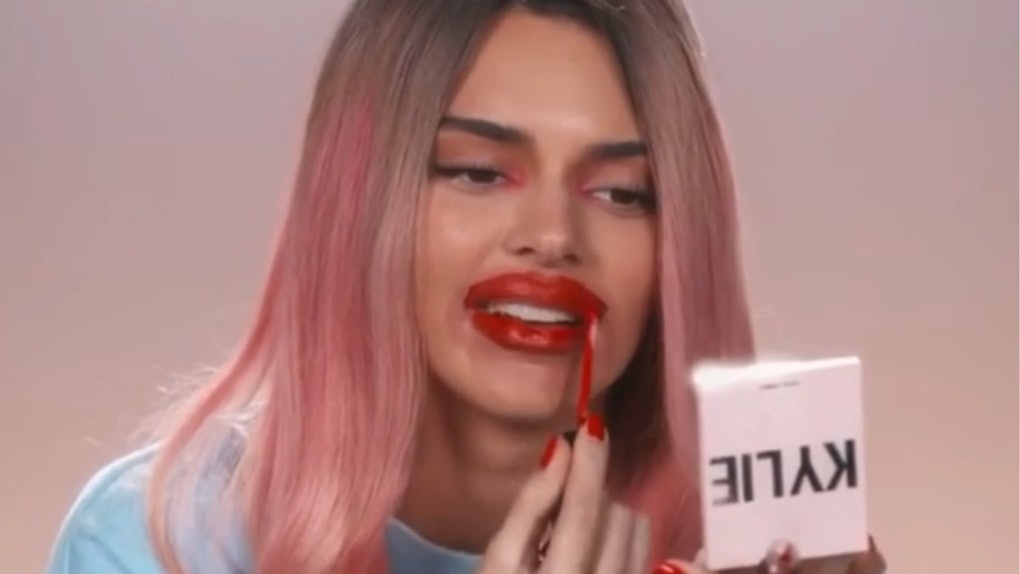 This Video Of Kendall Jenner Impersonating Kylie Is So, So Brutal

Over the years, fans have seen Kylie Jenner rocking a beautiful collection of wigs. From green and pink, to purple and blue, that girl has literally rocked every color imaginable. Kendall Jenner, on the other hand, prefers a more natural look, keeping her hair as it is. If you ever wondered how Kendall would look with one of Kylie's wigs, you need to see this video of Kendall Jenner impersonating Kylie.

Now, Kendall and Kylie may be some of the biggest celebrities out there, but they're just like any other sister duo. They love each other, they support each other, and, best of all, they roast each other every chance they get.

In a new clip from the upcoming Keeping Up With The Kardashians finale airing on Sunday, Dec. 15, Kendall dressed up like Kylie, and it was hilariously brutal.

The video began with Kendall just casually lounging around while wearing one of Kylie's signature pink, ombre wigs. She then applied one of Kylie's brightest red lipsticks on her lips, but went entirely overboard (she even put some on her teeth). All the while, Kendall couldn't help herself from laughing at how extra she looked.

"Oh my god. It feels amazing on my skin," Kendall said in her best Kylie-promoting-her-cosmetic-products-on-Instagram voice. "It feels so f*cking good."

Since Kendall was so surprised by how good Kylie's lipsticks are, that probably means she doesn't really wear them much. Hopefully, fans will see her rocking Kylie's Lip Kits more from now on, but maybe not on her teeth next time.

Next up, Kendall called Kylie to see her reaction to her wig. (Sadly, she didn't make the FaceTime call with the lipstick or else that would have been even more hilarious.) Once Kylie answered the call, Kendall actually introduced herself as her sister.

"You look cute as Kylie," her sister replied. "It looks amazing."

"You know you're talking to yourself, right?" Kourtney Kardashian's son, Mason, told the makeup mogul.

To finish up the clip, Kendall got into beauty-guru mode and showed off one of Kylie's other lipsticks called "One Wish," but when she revealed the lipstick swatches on her arms, it was basically just random scribbles.

Remember, if you want to see this whole hilarious moment, make sure to watch the KUWTK finale on Dec. 15.