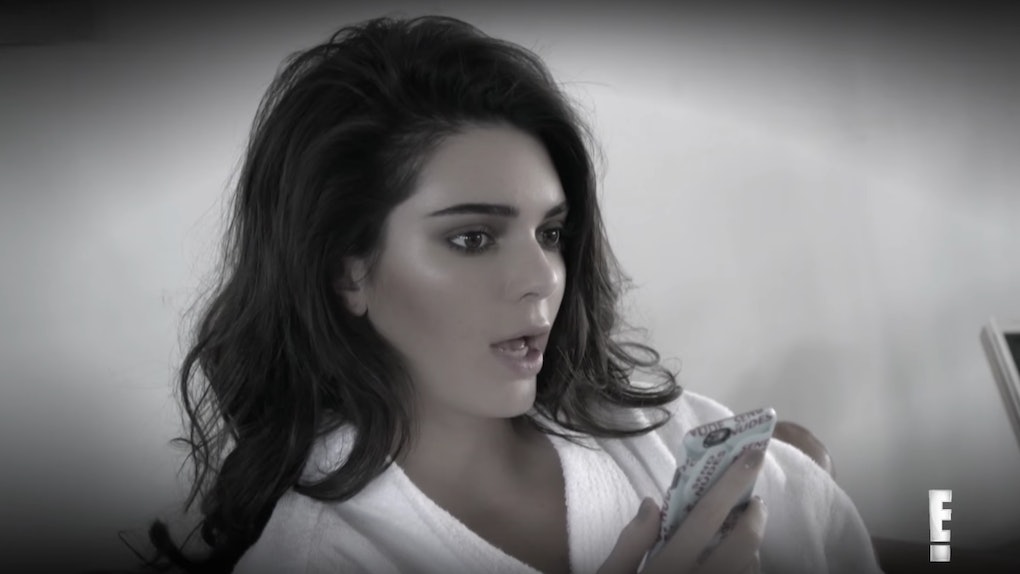 This Video Of Kendall Jenner Having A Panic Attack On 'KUWTK' Is So, So Intense

For those who struggle with anxiety, a panic attack is probably one of the worst feelings in the world. You sweat, shake, cry, feel like you can't breathe, and yet everyone will tell you you're fine. And it's not just us normal peeps who have to deal with the struggles of anxiety — celebrities are just like us! Kendall Jenner has never been shy about her experiences with anxiety, and this new video from this week's episode of Keeping Up With The Kardashians shows that once again. This video of Kendall Jenner having a panic attack is so intense and makes you feel for the model.

In the video, we see Kris Jenner in a meeting with big sister Kim Kardashian West. During the meeting, Jenner gets a call from Kendall, who is having a panic attack. Kris says, "Have you eaten something? Do you want me to come take you to the hospital? OK, I'm gonna come get you. Where are you?" You can hear Kendall on the line saying she's a few minutes away from her dad's house, and she quickly jumps off the phone when her dad starts calling her. When Kim K asks Kris what's happening, Kris replies, "She doesn't feel well. She's not quite sure what it is."

Kris says, "Kendall struggles with anxiety and I think she has so much going on that she gets herself really worked up ... Kendall gets the most anxious during fashion weeks and when she's traveling a lot. Milan's coming up and trying to juggle it all is overwhelming."

This isn't the first time we've heard about Kendall's struggles with anxiety on KUWTK. In the clip, we see a flashback of Kendall on the phone, saying, "It's so weird because I get like, super light-headed when I'm on planes, too, and I feel like I'm gonna faint. Everyone says I'm fine, but I don't feel fine."

A year ago, Kendall opened up about her experience with sleep paralysis on the show. In the clip below, Kris tries to go over Kendall's traveling schedule with her. Kendall cuts her off and says she doesn't think she can travel that much. She says, "I'm scared ... I'm freaking out because of these paralysis things ... I'm scared to fall asleep because it keeps happening to me." Um, can you even blame her? Traveling like that is already a lot of stress to put on a person, and to feel like you might be stuck in some half-asleep, half-awake state if you try to rest? Straight up terrifying.

Kendall opened up about her "debilitating" anxiety in an interview earlier this year with Harper's Bazaar. As a 22-year-old who has been in the spotlight for basically half of her life, Jenner knows she has had to grow up quickly. She said,

I feel like the life I live is extraordinary in a lot of ways but that it also comes with a lot of responsibilities. I’ve had to grow up pretty fast and deal with situations most 22-year-olds aren’t really put into. There are days and weeks and months when you just don’t stop.

When interviewer Cara Delevingne asked Kendall what keeps her up at night, Kendall said,

It’s funny you ask that because I have such debilitating anxiety because of everything going on that I literally wake up in the middle of the night with full-on panic attacks. Where do I even start? Everything is so horrible, it’s hard to name one thing. I just think that the world needs so much love. I wish I had the power to send Cupid around the planet, as cheesy as that sounds. You go online and you see everyone saying the worst things to each other, and it’s hard to stay positive. It’s hard not to get eaten alive by all the negativity.

Here's hoping Kendall will be able to find methods to lessen that anxiety and still be able take over the world as the successful supermodel that she is. We need you, Kenny!

More like this
This Reported Kendall Jenner & Devin Booker Dating Update Is So Sweet
By Candice Jalili
Kourtney Kardashian & Travis Barker's Photo At Machine Gun Kelly's Birthday Is Double Date Goals
By Cianna Garrison
Is Tinashe Single? The Singer's Dating History Has A Dramatic Connection To Kendall Jenner
By Jamie LeeLo
Stay up to date