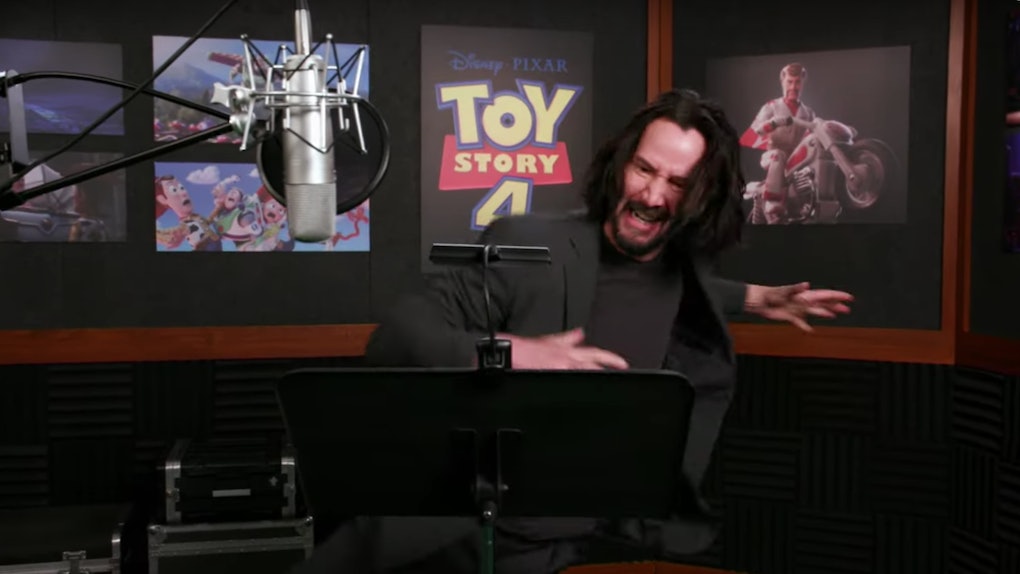 In case you have not noticed, we are in the thick of a Keanu Reeves renaissance right now — a Keannaissance, if you will. Over the course of the past month, Reeves opened his third John Wick movie John Wick: Chapter 3 — Parabellum, showed off his comedic chops by appearing as a crazed version of himself in the Netflix rom-com Always Be My Maybe, and stole the show at E3 by announcing he is a character in the upcoming video game Cyberpunk 2077. On top of all that, he is also preparing for his voice cameo in Toy Story 4, and a new video of Keanu Reeves recording his Toy Story 4 dialogue is just further proof of what an incredible year he has been having.

Keanu Reeves will be voicing the motorcycle-riding action figure Duke Caboom in Toy Story 4, which hits theaters on June 21. Previous trailers have shown glimpses at Reeves' stuntman toy, but a new behind-the-scenes video of the Toy Story 4 cast recording their lines really gives fans the full picture of how Reeves embodied his silly new role.

The new recording booth video shows all of the main Toy Story 4 cast recording lines from the new movie — Bill Murray gets his Woody voice on, Tim Allen puts on his authoritative Buzz Lightyear voice, and new cast members like Christina Hendricks, Keegan-Michael Key, and Tony Hale introduce their voices to the Pixar universe. But the standout section of the video is Keanu Reeves putting his full body into the voice recording process. In the clip, Reeves jumps, kicks, and makes huge hand motions as he fires off energetic line readings. You can check out the full video below, or watch only Keanu Reeves' segment which begins at the 8:10 mark and ends at 9:35.

Unsurprisingly, Keanu Reeves' passion in the behind-the-scenes video is infectious, and fans on Twitter cannot get enough of the video. One such fan is none other than Chris Evans, who proposed that Pixar release two hours of Keanu Reeves' voice acting footage and he would see it in theaters twice.

Other fans are having similar reactions as Chris Evans has, calling the clip one of the most feel-good and whole videos to hit the internet.

Disney Pixar shone a spotlight on Keanu Reeves' new Toy Story 4 character recently with a teaser trailer dedicated to Duke Caboom. Described as Canada's greatest stuntman both by himself and the TV commercial he starred in, Duke is shown to have a love for striking poses and showing off, but may not actually be as skilled a stuntman as he lets on.

Luckily, fans will not have to wait much longer to see Duke Caboom and the rest of the new toys join up with old favorites, because Toy Story 4 will finally arrive in theaters in just over a week. The highly anticipated sequel, which is also predicted to possibly be the final film in the Toy Story franchise, has its premiere on Friday, June 21.