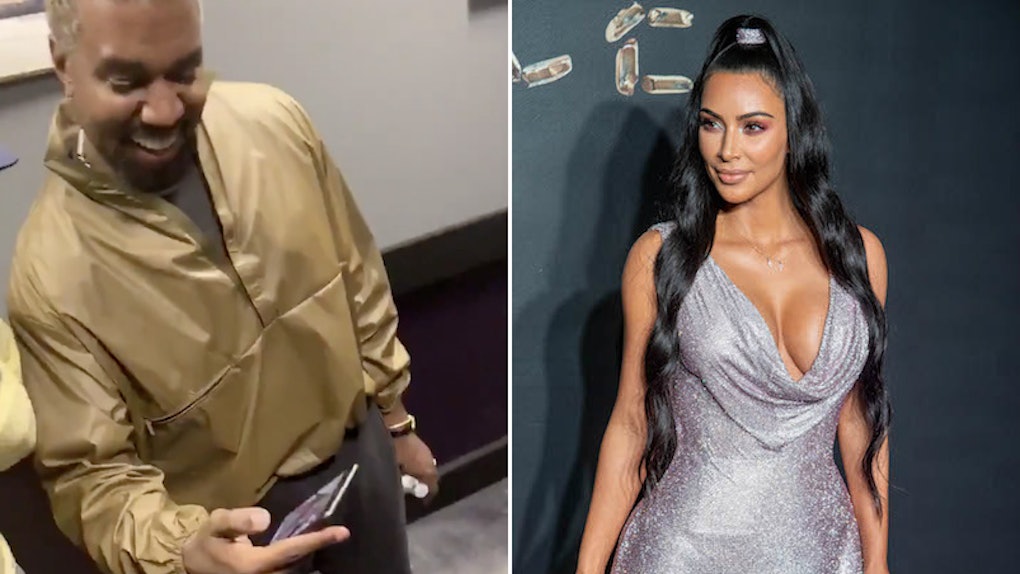 Kanye West kind of has a thing for grand gestures. I think everyone can agree "subtle" isn't really his style. He's been known for huge stunts, outrageous rants, innovative concerts, and proposing to Kim Kardashian in a giant baseball stadium while an orchestra played Lana Del Ray's "Young and Beautiful." So, is it any surprise he pulled off yet another sweet gift for her just because he felt like it? The video of Kanye West surprising Kim Kardashian with a live love song sung by the famous R&B group 112 is the Ye equivalent of a regular hubby bringing home flowers. It's cute in, like, a famous person's kind of way.

Using my context clues, on Sunday, Jan. 20, West was hanging out with 112's standing members, Mike and Slim. In the video, which was shared by TMZ and posted by Kim herself on Twitter, West FaceTime's his reality TV star wife. She answers by casually asking, "Hey, what's up?" At that point, 112 broke out singing one of their most romantic songs, "Cupid." You can just make out Kim's surprised face on West's phone as the song goes on. At one point, it sounds like she says, "I'm going to cry." Once 112 wraps up their riff, Kim plainly states, "This is one of the best days of my life. Oh my god."

Honestly, it seemed like everyone didn't plan anything else after the song considering Mike, Slim, and Kanye all just kind of stood around laughing and smiling. Don't worry, Kim kept the conversation rolling for everyone be explaining, "I have to go call my sisters." She signed off, "Oh my god, I'm so excited! OK bye."

In true Ye form, he and his friends patted each other and themselves on the back after she hung up. There's literally no telling where or what the mysterious hallway they're all hanging out in is.

Kim shared the video on Twitter with the caption, "Ummmm so this happened tonight!!!! #112."

About ten minutes later, she followed that post up with another tweet explaining how much she and her sisters adore 112.

You guys have no idea how much that call means to me!!!!! 112 is my favorite group! I literally almost cried! Kourtney and Khloe completely feel me. They love 112 too.

Based on her tweet's likes and comments, people love 112, which is lucky for Kanye. According to TMZ, sources claim Ye and the R&B duo are planning a collaboration together. So, even though the gesture for Kim was romantic AF, it might not have been as spontaneous as fans originally thought.

Still, we're talking about the same man who gifted his wife with Disney stock for Christmas. It's hard for him to do anything nice for her without it coming across like the sweetest, largest, most romantic gesture you've ever seen.

My husband only picks up my dog's poop, holds my hair back when I have the stomach flu, and puts up with my conspiracy theories, crystal obsession, and Bravo TV addiction. It's like, what gives? Why doesn't he love me?