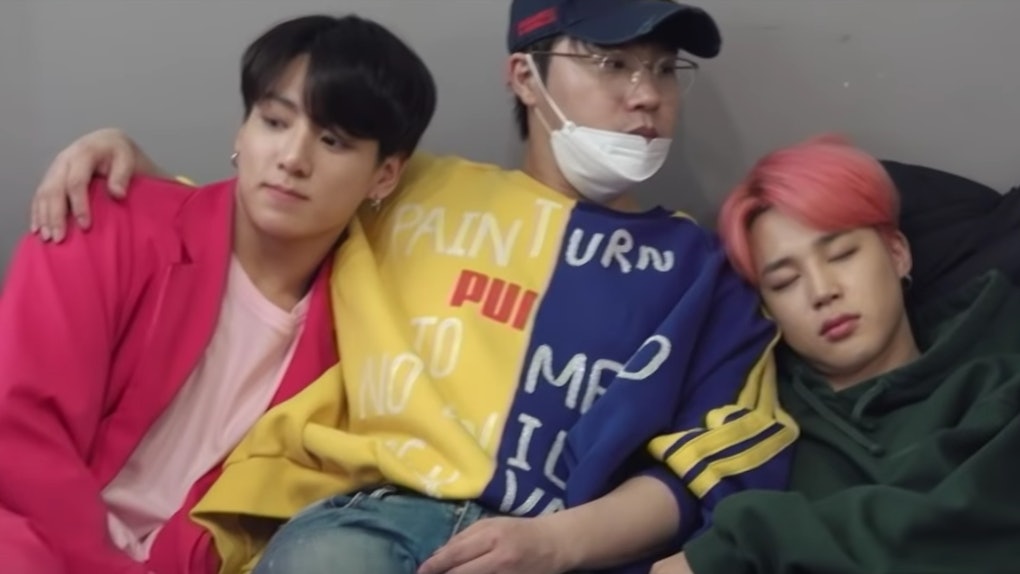 This Video Of BTS, TXT, & Lee Hyun Eating Pretzels Ends With That Prank On Sleepy Jimin

BTS' world knows no bounds. Just when you think you've wrapped your mind around all the relationships, collaborations, friendships, albums, hit songs, and group dynamics, you see something like this that just shakes you to your core. The video of BTS, TXT, and Lee Hyun eating pretzels isn't extraordinary by nature per se, but it is a super intimate and rare look behind the scenes with all three of Big Hit Entertainment's acts.

Bonus, it ends with a hilarious sleeping Jimin, which I think we all agree is one of the most adorable things to witness.

For context, this video was taken during the April 27 episode of Music Core that included performances by both BTS and TXT. BTS is famously made up of the iconic idols J-Hope, Jimin, Jin, Jungkook, RM, Suga, and V, and their "little brother" group TXT includes members Yeonjun, Soobin, Hueningkai, Taehyun, and Beomgyu. BTS was there to perform their largest hit to date "Boy With Luv" off their newest album, Map of the Soul: Persona. TXT performed their single "Cat & Dog" from their debut album, The Dream Chapter: Star.

Meanwhile, Big Hit solo artist Lee Hyun attended the Music Core performance to support his Big Hit brother groups and offer the best thing in the world: snacks. After the show, Lee Hyun surprised the group with delicious-looking pretzels in a variety of flavors. As I said, the gesture in and of itself isn't particularly noteworthy, but having a chance to peek behind the curtain and see what a group of K-pop idols look like after giving it their all on stage, hungry and tired, feels intimate and special.

Lee Hyun tweeted an amazing family portrait of himself, BTS, and TXT, which the Korean pop culture website Soompi translated into English:

To do away with old regrets, I came to cheer at the Sangam MBC building for the first time in a long time. I figured, if not now, then when would we all be together again? Thank you to my dongsaengs, who welcomed this old boy.

Look closely at the photo. See that shining pink angel in the middle there? How cute is sleeping Jimin?!

According to Soompi's translation, Jimin responded to Lee Hyun's post with, "Hyung, why don’t I have any memory of this photo? Guys, when did you take this photo."

BTS and TXT also both thank Hyun for the treats and for attending the show.

The actual video shows the boys offering each other pretzels, feeding each other (as many of them are half asleep), and Jimin snuggling up to Lee Hyun on the couch prior to the picture being taken. You can see that everyone looks a little zonked out, which is totally understandable. I can only assume the Music Core performance came in the middle of both group's particularly demanding schedules.

Fortunately, one Twitter account shared the final moments of sleepy Jimin clapping with his eyes still closed. As the user noted, Jimin was still half asleep (he probably doesn't even know what he's clapping for).

On behalf of ARMYs and TXTers everywhere, thank you for bringing the boys snacks, Lee Hyun! This is such a fun moment.