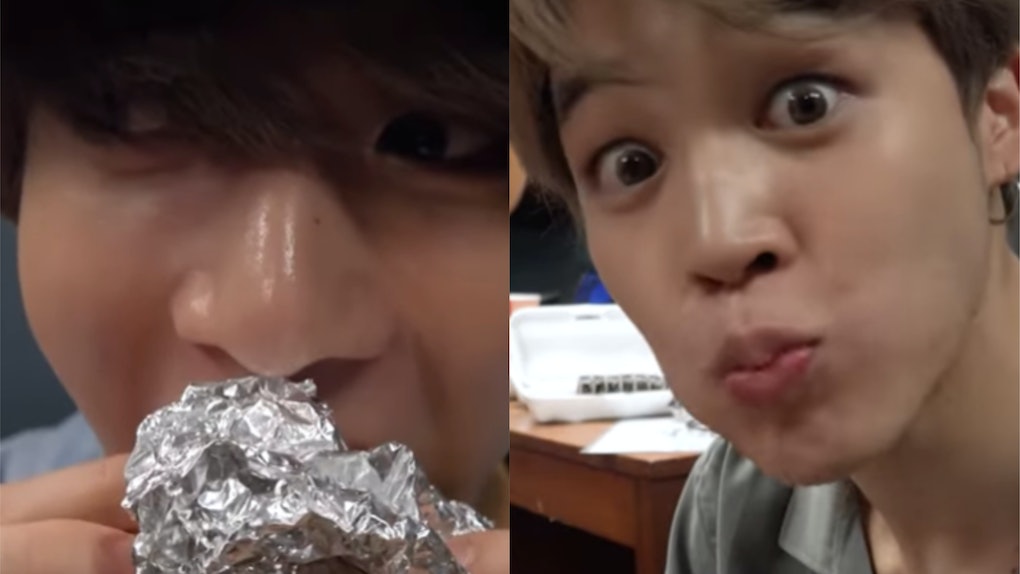 There are a lot of nicknames the BTS ARMY has for BTS' Jungkook. Let's see, there's "Golden Maknae," Kookie, JK, Bunny, and the list goes on. (Seriously. Jungkook has like 10 different nicknames.) Now it seems like he has a new nickname and according to the latest BTS Bangtan Bomb video, it's "Hot Dog Master" because it's a video of BTS' Jungkook and Jimin reviewing fast food and Jungkook had a lot to say about the hot dogs.

Big Hit shared the video with fans on Thursday, Sept. 26, but it was probably taken back in September 2018 since you can see a TV in the background that has the The Tonight Show Starring Jimmy Fallon logo on it. BTS appeared on the show on Sept. 25, 2018. As per usual, while behind-the-scenes of their performance, BTS decided to take a much-needed lunch break and they were so excited to eat that they sang a bit of LMFAO and Lil Jon's "Shots," only with a fast-food-inspired twist.

As the guys walked over to get their food, they couldn't help but chant, "Shake! Shake! Shake! Shake! Shake!" and ended it with a big, "Everybody!" I'm telling you, there's never a boring moment with BTS because these guys are always finding ways to keep themselves entertained and that's just one of the many, many reasons the BTS ARMY loves them so much.

Jimin was the first to take a bite of his food, and Jin asked him, "Is it good?" Well, apparently it was freaking delicious, because Jimin stuffed his mouth full and could only reply by giving Jin a thumb's up.

Jungkook then tried out the hot dogs, and he gave a very thorough review of them. According to a fan translation by user JL_Kdiamonds, Jungkook said, "The buns are sweet. It's not a bad sausage, it tastes good, but it's a little salty. It's salty." He also pointed out (mildly disappointed) that there were no onions — so there's that.

But as Jungkook kept eating the hot dog, he actually started to really like it. He said, "It actually tastes good! I'm getting used to the salty flavor." (That's hilarious because it sounded like a drag and a compliment at the same time, LOL. I love JK!)

Then around the 1:24 mark, at Jimin's direction, Jungkook totally froze in the middle of taking a bite. He stayed completely still for about 14 seconds until Jimin returned, burger in hand and swapped out Jungkook's salty hot dog for a burger. Jimin couldn't help but bust out laughing as Jungkook re-animated and took a big bite. "There is no bacon, so it tastes less salty," Jimin pointed out. Good lookin' out, Jimin.

I wonder went what through Jungkook's mind, but I'm guessing he was just thinking of his next review because Jungkook ended the video by declaring this: "Next month, I'll come back as a burger expert." I'm sure you will, Jungkook!

You can watch the clip with English subs below.

This wasn't the first time Jungkook has reviewed fast food in a Bangtan Bomb clip. On Aug. 9. Big Hit also shared a behind-the-scenes video of BTS at America's Got Talent where they ate hot dogs. Jungkook pretty much put every topping imaginable on his hot dog and he ate it so deliciously that all the BTS members had to have one, too.

You can watch the clip below.

I'll be looking forward to all your food reviews, Jungkook, because guess what? You really are the "Hot Dog Master!"

More like this
How Many Tattoos Does BTS' Jimin Have? His Collection Is Growing
By Michele Mendez
Rosé From BLACKPINK's "Gone" Music Video Is The Ultimate Sad-Girl Aesthetic
By Abby Monteil
What Does Taylor Swift's Vault Door Video Mean? Fans Are Decoding It
By Cianna Garrison
Stay up to date