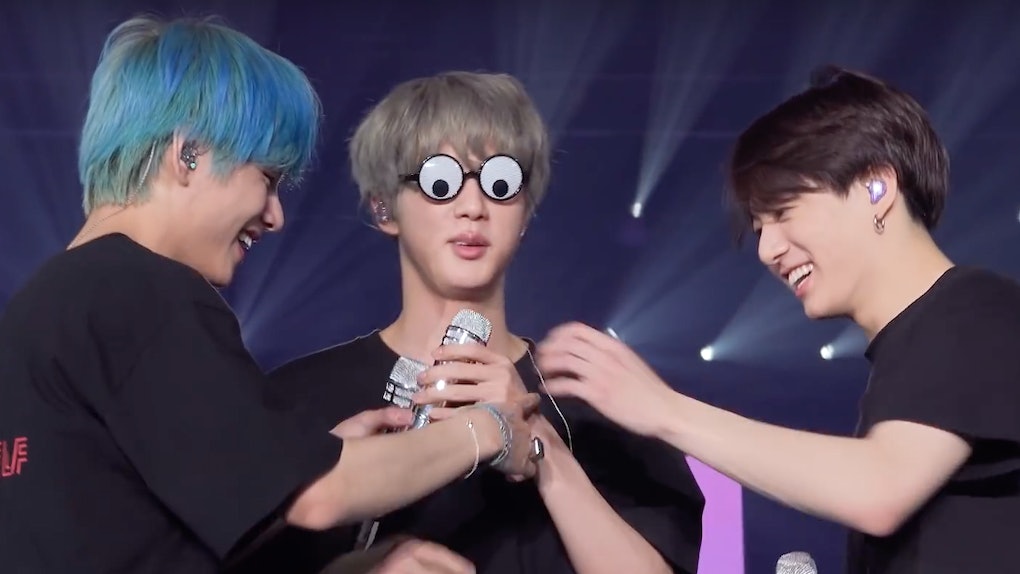 If you're a fan of BTS (and, c'mon now, what kind of true music fan isn't these days?), then you probably already know that Jin loves to rock him some shades — especially when he's on stage. Sometimes he even piles on more than one pair at the same time because why stop at just one, you know? And remember that time when ARMY turned a pic of him wearing a pair of white sunnies into a meme in order to celebrate his 26th birthday? So classic! Well, now there's a video of BTS' Jin showing off his sunglasses collection on tour in Hong Kong, and lemme just say, his stockpile is as seriously epic as we always imagined it would be.

The new Bangtan Bomb — which was filmed during BTS' Love Yourself world tour — was posted to BangtanTV's YouTube channel and kicks off with a clip of Jin trying on a pair of light blue rhinestone, shutter shades. Yeah, I know Kanye made these babies a thing like 12 years ago when he wore a pair of shutter shades in the video for his song "Stronger." But in a Who Wore It Best? type of matchup, the oldest member of BTS wins every single time if you ask me.

I mean, just look at how cute he is:

Next, we get to see Jin sample a funny pair of red and white jester shades — complete with jingle-y bells on the ends.

Not gonna lie, I kinda want a pair of these ASAP. Also, we see you in those pink rhinestone earpieces, Jin, and we are so here for it!

Now, check him out rocking that same pair on stage:

Up next are the googley eyes:

Then come a pair of oversized silver shades with matching silver balls hanging off them that looks like a pair of big dangling earrings:

I think this marble ball pair may just be my fave! They were Jungkook and Jimin's faves, too, since they couldn't help but try the pair on for size as well!

And finally, Jin selects a pair of pirate specs with only one lens and a 'stache attached, that he then rocks on stage.

Honestly, this entire parade of sunglasses is truly amazing and you guys def need to see it for yourselves, so here ya go:

This whole video is just perfection, but how much did you love it when Jin was trying to fit all those oversized shades into the pockets of his jeans? The struggle was so real and it was seriously the best thing I've seen all day!

I'm not alone in my feelings about this epic Jin x sunglasses collab, by the way. ARMY took to Twitter to share all the emotions about Jin's collection of shades.

Can't wait to see if Jin will bust out some sunnies when BTS hits up the Shizuoka Stadium Ecopa in Shizuoka, Japan on July 13 and 14 for the last two stops of Love Yourself: Speak Yourself.