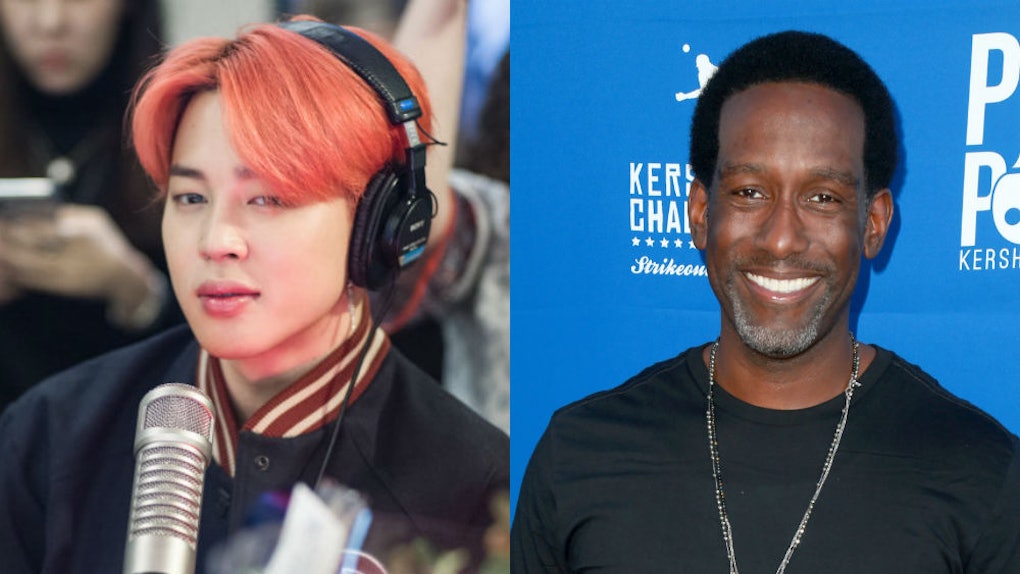 Motownphilly's back again, you guys! Shawn Stockman from everybody's favorite '90s R&B boy band Boyz II Men just showed the world that he's an ARMY, and OMG I'm loving this new development! See, the singer/songwriter shared a beautiful cover of one of BTS' songs on his Instagram on May 7. And you have to see the video of Boyz II Men's Shawn Stockman singing BTS' Jimin's "Serendipity" because it is just too epic. I mean, he played the tune on the guitar while simultaneously singing the lyrics in Korean, which is so dope considering he doesn't even know how to speak the language! Could there be a Boys II Men/BTS collab — BTM x BTS? — in the future? Or can Jimin now cover "End Of The Road"? One of these things really needs to happen. And, like, soon.

Anyhoo, Stockman uploaded a video of himself covering Jimin’s solo track to his feed, and he also shared his stellar acoustic performance on Instagram Live.

"I'm gonna try this," he began, before busting out a few bars. "Don't matter what language a song is spoken in or sang in. It's beautiful. It's beautiful, you know what I'm saying?"

So, so good! I mean, what's better than one legend supporting another legend? I can't comment on his Korean pronunciation (since I don't know the language), but his voice singing the song sounded amazing to me!

Meanwhile, if you're a true fan, then you prob already knew that Stockman was also in the house for the three-hour, sold out BTS concert at the Rose Bowl in LA on May 5. The singer even gave the boys' performance that night a shoutout at the end of his "Serendipity" gig on Insta Live.

Of course, we now know that Stockman took it upon himself to learn at least one BTS song since that show.

Let's take another look at his "Serendipity" cover:

I could seriously watch this performance all day!

Oh, and here's a pic that Stockman posted from the May 5 show at Rose Bowl:

"Got off the plane and went straight to the @bts.bighitofficial concert at the #rosebowl," he captioned the image. "What a night!"

The Boyz II Men singer also shared a photo on his Insta Story of him listening to Jimin's version of "Serendipity" in his car:

And one of him as the realization hit that he's fully an ARMY now:

We purple u, too!

Better watch your back, Khalid, because Stockman is coming hard for your No. 1 fan status!