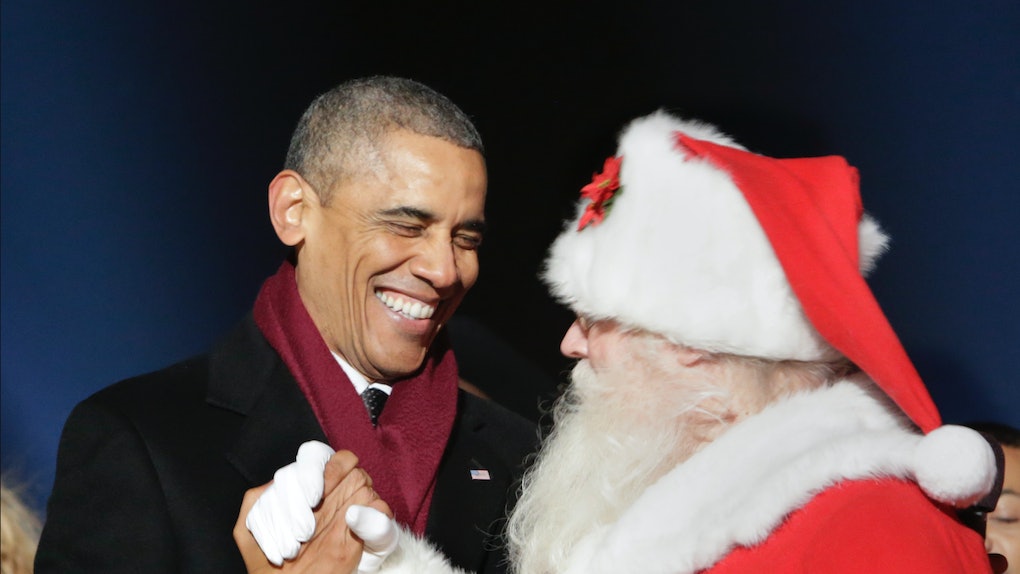 The holidays are truly a magical time of year, but sometimes we can get a little too wrapped up in gifts (see what I did there) and forget to be thankful for the little things. Well, it looks like a certain former president agrees with that sentiment, because this video of Barack Obama surprising kids for Christmas is literally peak holiday cheer. You have to admit, this would probably melt even the Grinch's heart.

On Wednesday, Dec. 19, President Barack Obama visited the Washington Children’s National Health System in Washington, D.C. to bring some much needed joy into these kids' days. The former president, adorned in a festive Santa hat and lugging a sack of gifts, walked the halls of the children's hospital while patients and staff greeted him by singing a rendition of "We Wish You A Merry Christmas." Truth be told, this may be the most heartwarming thing I've seen all year. Apparently Obama was in his feelings too, because he delivered a kind message thanking the hospital's staff for all their hard work. He said,

I just want to say thank you to all of you guys. I got a chance to talk to some of the wonderful kids and their families and at a time that obviously is tough for folks. As a dad of two girls, I can only imagine in that situation to have nurses, staff, and doctors and people who are caring for them, and looking after them, and listening to them, and just there for them and holding their hand, that's the most important thing there is. What a great reminder of what the holiday spirit is supposed to be about.

I don't know about y'all, but I might smell a new holiday tradition in the works, especially since in December 2017 he surprised visitors at the Boys and Girls Club in Washington, D.C. in a similar, festive fashion.

Pushing gifts and Christmas parties aside for a moment, embracing holiday traditions and appreciating the little things in life are honestly what the winter season is all about. Plus, now that the Obamas have moved out of the White House, it looks like the former president is making sure he spends his time bringing joy into other people's lives. Clearly he struck a chord with the patients and workers at the children's hospital, but his visit to the Boys and Girls Club in 2017 was an equal success. During his visit, Obama greeted each child with a friendly smile, warm hugs, and plenty of gifts. Judging from these children's reactions, I think it's safe to say it was even more exciting than meeting Santa.

Obama playing Santa for two years in a row not only (hopefully) represents a new, heartfelt holiday tradition, but it reminds us that there are so many things to be grateful for this Christmas season. Whether you're spending the holidays alone, with family, or with friends, don't forget to take a moment and remember what you're thankful for.

For me, I'm thankful for videos of Barack Obama in Santa hats. Merry (early) Christmas, everyone!