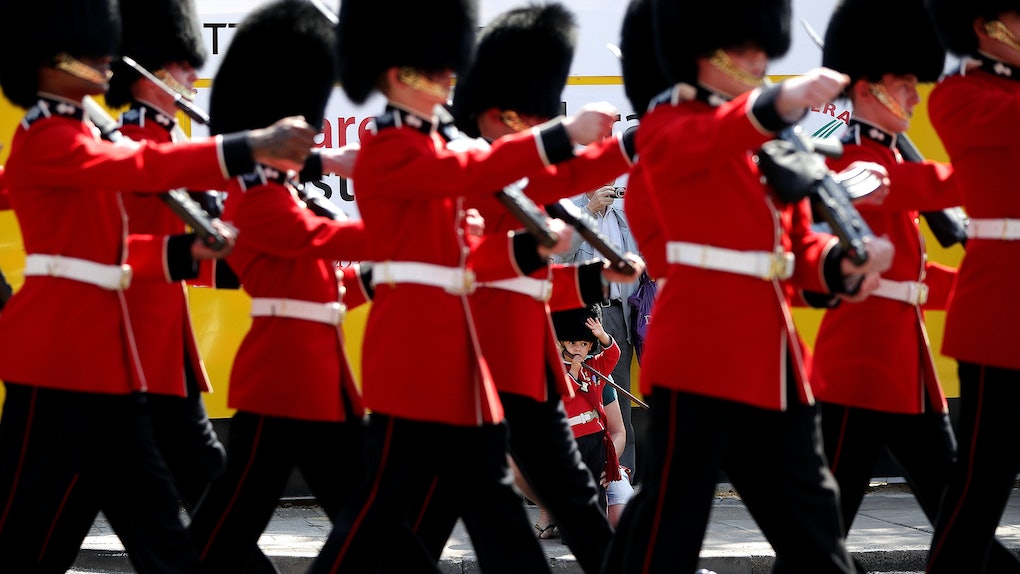 As family, lifelong friends, fellow singers, and even a former U.S. president gathered in Detroit on Aug. 31 to remember Aretha Franklin, the Queen's Guard at Buckingham Palace took a moment to pay their respects to the late singer across the pond. During the Changing of the Guard Ceremony at Buckingham Palace on Friday, the Band of the Welsh Guards broke out into one of the hits the Queen of Soul is most remembered for, and luckily for us, the whole performance was shared online. This video of Aretha Franklin's "R.E.S.P.E.C.T." at Buckingham Palace is the ultimate tribute, and the unexpected gesture is further proof of how beloved the songstress was around the world.

Per Cosmopolitan, on Friday morning, tourists who came to watch the ceremonial handing over of responsibilities were surprised by a once-in-a-lifetime moment: the guard orchestrating a rendition of Franklin's beloved "R.E.S.P.E.C.T." Considering that the hit song has become an anthem for strong, independent women everywhere, it's not that surprising that Queen Elizabeth II — who currently boasts the title of the longest-reigning British monarch with 66 years of rule and counting — would be a bit of a fan of the empowering 1967 hit.

While I was unfortunately unable to the personally witness the usually stoic Band of the Welsh Guards getting down to Aretha, you can find the whole performance on the British Army's YouTube page.

"Crowds attending the Changing of the Guards Ceremony at Buckingham Palace this morning were treated to more than the usual respect by the troops from the British Army’s Household Division," the British army wrote alongside the two-minute video, which occurred as Queen Elizabeth II's guard ceremonially handed over their responsibilities to a fresh guard at the end of their watch.

With a nod to the funeral processions happening in Detroit, they continued, "The Band of the Welsh Guards are world famous for their musical versatility and professional performance and this morning paid tribute to another musical icon and one that has been of huge influence and inspiration to our musicians – Aretha Franklin, whose funeral was being held in Detroit 3,748 miles away, at the same time of the Queen’s Guard Change."

They concluded their note with an empowering message that'll make you say sock it to me. "In the Army Respect for others underpins all that we do, so there was only one tune that would do for today’s ceremony: the 1967 Aretha Franklin hit “R.E.S.P.E.C.T.” a declaration from a strong confident woman who knows that she has everything," they wrote. Franklin passed away at the age of 76 on Thursday, Aug. 16, 2018.

Surprisingly, this isn't the first — or even most daring — time that the musically-inclined Guard has showed off their talents. One look at the army's YouTube page shows that some of their most popular videos are of their flash mob performances (seriously, how did I not know about this?), although it's been a while since they've posted one. In Sept. 2013, members of the regular and reserve bands surprised passersby in Birmingham's Chamberlain Square with a rendition of "Sing, Sing, Sing", by Louis Prima, and it'll make you so happy.

However, it's not every day that the Queen makes a request for the Changing of the Guard to show their respects to another sovereign: the Queen of Soul. It's safe to say that the late 76-year-old icon, who sang at three presidents' inaugurations and sold over 75 million records during her six-decades-long career, will be missed around the world.

More like this
Rosé From BLACKPINK's "Gone" Music Video Is The Ultimate Sad-Girl Aesthetic
By Abby Monteil
Britney Spears' Instagram Message To Fans "Concerned With Her Life" Is So Positive
By Brandy Robidoux
TikTok's Trailblazers: These Creators' Ideas Went Viral Without Them & It Needs To Stop
By Brandy Robidoux
Stay up to date