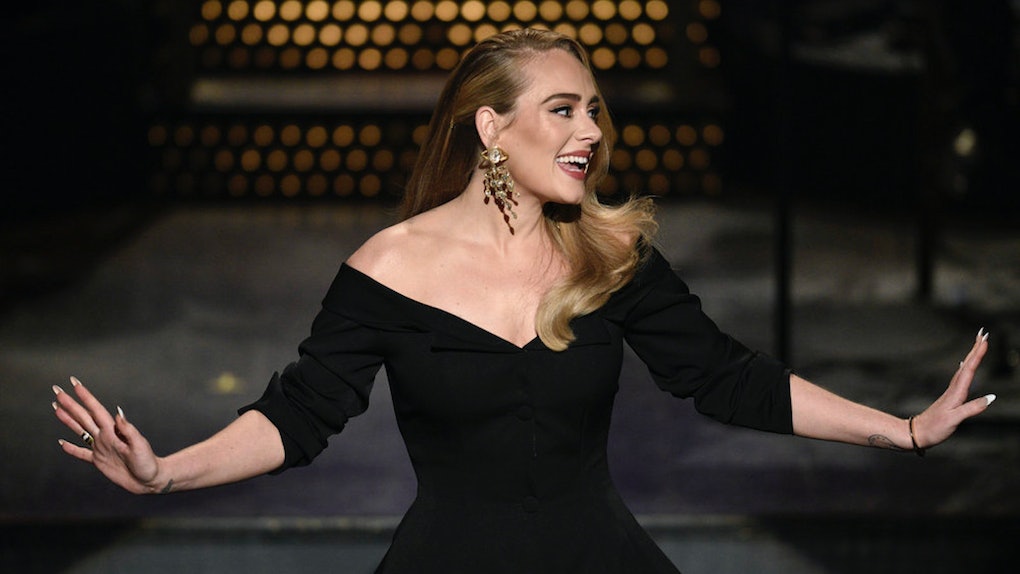 Adele made her inaugural Saturday Night Live hosting gig a memorable one as she made jokes about her new look and how far she'd come since first appearing on the series as a musical guest back in 2008. While the "Hello" singer has been notoriously mum about her new look and the status of her upcoming album, she served up a few key details during her Saturday, Oct. 24 episode. Sadly, this video of Adele’s Saturday Night Live monologue hints that her album might take longer to come out than fans had hoped.

During her monologue, the Grammy and Oscar-award winner addressed why she wasn't doubling up as the host and musical guest for the episode. Following her announcement that she'd be headlining the show, many fans expressed disappointment that the British singer wouldn't be performing some of her old hits or sharing new material for the very first time. Instead, H.E.R. took to the stage to provide the music for the night.

"I know there’s been a lot of chatter about me just being the host," Adele said during her monologue. "Like, 'Why isn’t she the musical guest?' There’s a couple of reasons. My album’s not finished and I’m also too scared to do both."

Unfortunately, the "Someone Like You" hitmaker didn't say when fans would be getting a new album, which would be the first since Adele's release of 25 in 2015, but she did take a moment to reflect on her first 2008 SNL episode, which featured Tina Fey and Sarah Palin.

"Now, I don’t know anything about American politics — I mean, I’m British you know — and I don’t want to say anything too political, but I’ll just say this," she said about the episode, which she credited for helping launch her career in the United States. "Sarah Palin, babes, thanks for everything."

Over the past few years, Adele's slimmed-down appearance has been the subject of numerous media reports and headlines. While the star, who divorced ex husband Simon Konecki back in 2019, has stayed mum on her new look, she poked fun at the media attention during her monologue with a reference to the coronavirus pandemic.

"I know I look really, really different since you last saw me," Adele joked. "But actually, because of all the COVID restrictions and the travel bans, I had to travel light and I could only bring half of me. And this is the half I chose."

While finishing up her monologue, the 32-year-old star again referenced the pandemic, this time on a more serious note, as she thanked the frontline workers in the audience.

Only time will tell when Adele decides to return to SNL to give fans a preview of her new album, but here's hoping new music will be coming out sometime in 2020.