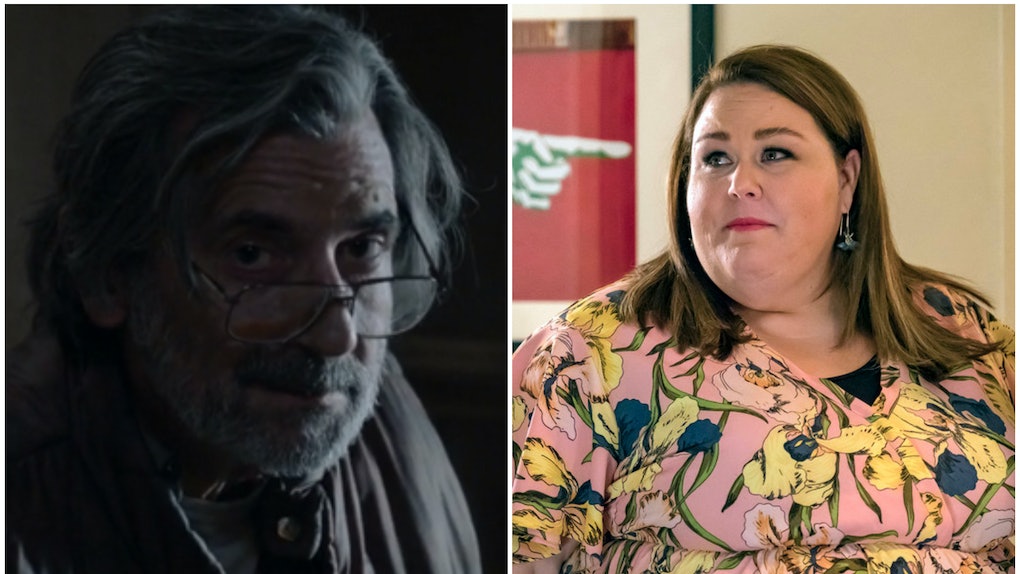 Long-lost Uncle Nicky has reunited with the Big Three on This Is Us, but the meeting wasn't exactly the tender encounter a novice This Is Us viewer may have expected. After initially leaving Nicky at his request, Kevin persuaded his siblings to return to the old man's trailer and provide the support Jack couldn't muster back in the day. At the emotional episode's closing, Nicky's guilt about never telling Jack the truth about Vietnam had consumed him, but his upcoming time with the Pearsons could save a future family member. This theory about Kate's baby and Nicky is slightly ominous, but the story prediction is totally heartfelt.

Jan. 22's "Songbird Road: Part One" played up the connection between Kevin (Justin Hartley) and Nicky (Griffin Dunne in the present day). As Kevin was the sibling to travel to Vietnam in search of more answers about Jack's past there, he was the most invested in finding Nicky, and it was his decision to return to their uncle's home after the older man initially sent the group away. The preview for Feb. 5's "Songbird Road: Part Two" alludes to the Big Three taking Nicky home to meet Rebecca (Mandy Moore), but a fan on Reddit is looking past the family's initial getting-to-know-you tension to guess what role Nicky may play in the future of the show.

When the Big Three mentioned that Jack died from a heart attack due to smoke inhalation, Nicky kind of made a knowing face. I’d assume he knew the heart condition was what prevented Jack from being drafted. Do you think he’ll mention this and it’ll somehow wind up helping Kate’s baby? There was a big deal made about “passing on something of Dad’s”... Also, this could be a way for Nicky to redeem himself for Jack and his family.

Others have also read Nicky's reaction to Jack's death as implication that he was thinking along the lines of "classic Jack saving everybody." This makes sense and is probably true — after all, Nicky called his big brother Superman. However, Nicky flashing back to Jack's heart condition is also probable. ICYMI, Jack (Milo Ventimiglia) couldn't be drafted into the Vietnam War because of his weak heart, but he persuaded their family doctor to fudge his medical records so he could enlist and look after a declining Nicky overseas.

With eventually deadly consequences, Jack apparently never shared the details of his heart condition with his family. Even as a happy husband and father, Jack kept his life before Rebecca under wraps, meaning that Rebecca was supposedly unaware of how susceptible his heart was to smoke during the post-Super Bowl house fire contributing to Jack's death. Seeing as Jack's heart issues are seemingly still a secret to the triplets and Rebecca, could Nicky's past with his brother come in handy if Kate's pregnancy takes an ugly turn?

As Nicky relied heavily on Jack's support ahead of being drafted, it's safe to assume that he knew why his brother didn't have a chance of also being sent to war. Nicky was also bitter about Jack arriving in Vietnam to help him, presumably wondering why anyone would willingly subject himself to this experience. After he served as a war medic while often under the influence, the 2019 state of Nicky's medical knowledge is a little questionable, but in the process of catching up with the family, perhaps he could spill about how Jack wasn't even supposed to serve in war. Further explanation could lead to Kevin and Kate seeking confirmation about whether they or Kate's baby have the same kind of heart problems. In that case, a strange relative saves the day again!

The show's future timeline hints that Kate is no longer with Toby, but fans have also yet to see a glimpse of their son or Kate in these flash-forwards. Knowing how much This Is Us loves a heartbreaking twist, we shouldn't count on a safe and healthy baby delivery just yet, but perhaps Nicky will guide Kate toward addressing the potentially dangerous piece of Jack she may pass down to her child. Who said anything about only passing on the shining personalities and strong genes in your family?