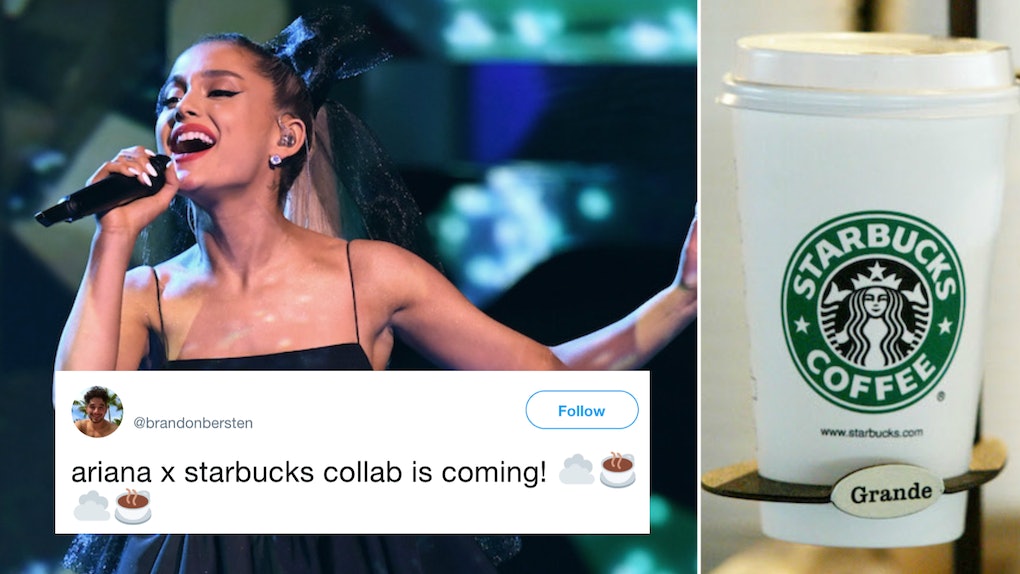 Gee, Starbucks. It took you long enough. Fans have a theory that Starbucks is making an Ariana Grande drink thanks to some pretty convincing evidence, which has most of us saying, "It's about time." The young pop star is regularly photographed walking with an iced Starbucks beverage in hand and considering her last name is synonymous with the coffee chain, this collaboration seems like it was written in the stars. Or, um, written in the clouds, I guess.

On Monday, March 4, both Starbucks and Grande started posting about what appears to be a joint endeavor. If you follow Grande, you know clouds are kind of her thing. She has one tattooed on her finger and regularly uses the emoji in tweets and Instagram captions. Her fragrance is also aptly named "Cloud" and comes in a cloud-shaped bottle. So, when Starbucks starts posting a bunch of cloud content, one could only assume it has something to do with the Sweetener singer.

These name games never really seem to work out for me.

Next, Starbucks shared a picture of a heart-shaped cloud with the hidden messages "thank you, next" and "tomorrow you'll be smiling real smiles" stamped inside of it. If that isn't an intentional Ariana Grande reference, then I don't know what is. They followed that post with a picture of yet another cloud with the message, "Live your life out cloud."

Meanwhile, over on their Instagram account, Starbucks has been equally busy sharing cloud content. They posted three videos of cloud-shaped treats. Two looked like they could have been made out of a sugar concoction and the other was a sparkly little cloud burst that rained silver and purple glitter into a bowl of water. In two instances, Starbucks directed users to have the sound on, giving off a specific ASMR-like vibe to the posts.

Sound on for the first two to see what I mean...

While Grande isn't going as hard on her social media accounts, she did address the world's most famous chain directly. She shared a screenshot of her own tweet containing some choice emojis, Starbucks' handle, and the date March 5th.

Here are my first three ideas about what it could be as they came to me:

If it's number three, I'll be pissed. I'm standing by, Starbucks and Ari. I want to love this!

More like this
Will BTS' 2021 Comeback Be At The BBMAs? This Fan Theory Is Pretty Dang Convincing
By Michele Mendez
When Are Ariana Grande & Dalton Gomez Getting Married? Here's The Reported Tea
By Corinne Sullivan
Will BTS' McDonald's Meal Include Photocards? Here's What ARMYs Should Know
By Michele Mendez
Stay up to date