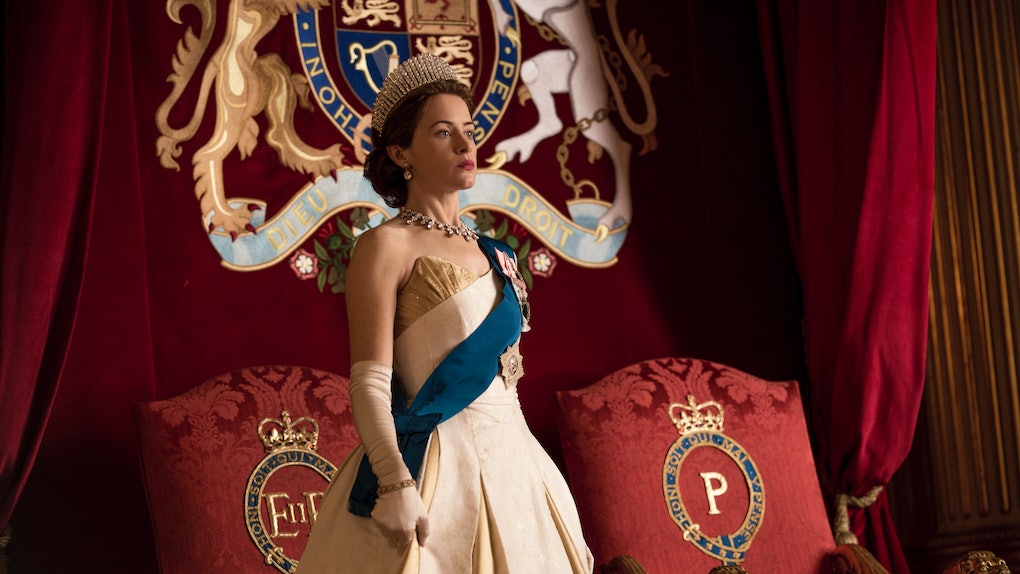 We still have to wait until 2019 to see brand new actors step into the roles of the royal family on The Crown, but luckily, Netflix gets that the days are long and sometimes we just can't bear the unknown. The show just released its first look at new leading lady Olivia Colman as Queen Elizabeth II and, no surprise, this The Crown Season 3 photo of Olivia Colman proves she's natural royalty. Rest assured, Claire Foy loyalists, this queen is worth her crown.

The Twitter account for The Crown released a photo of Colman in costume with the titillating caption, "Patience." Mirroring plenty of older shots featuring original actress Foy, Colman is seemingly alone at a table, looking off into the distance with her tea in hand. After all, if there's anything the first two seasons confirmed, it's that it's quite lonely to be queen. Other than knowing that the picture is obviously from a later point in time than Season 2, we have no other clues about the context of the snapshot. Is it literally just meant to tease us about the ongoing wait we have until new episodes?

While she doesn't necessarily resemble Foy's young Elizabeth, Colman does look a little similar to the real-life Queen of the late 1960s and early '70s. Do you think the Queen holds these photos up to her personal pictures and asks Prince Philip if he sees the resemblance?

The tension in the photo probably isn't entirely acting. According to new cast member Helena Bonham Carter, Season 3 of The Crown was due to start filming around the end of June, meaning that the photo of Colman is likely from early on in production. Nerves must have been inevitable in that scenario, but Foy has faith that her successor will settle into the role smoothly. When Colman was announced as the new Queen in October 2017, Foy supported her, saying that real-life circumstances included in upcoming seasons would allow for Colman's Elizabeth to be different from Foy's:

She’ll play the Queen at a very different time to me. It’s a rolling thing, and it’s ever-changing and ever-revolving. That’s the secret in portraying the Queen — no one owns it. It’s everyone’s interpretation, and that’s also the beauty of it. I think the most important thing for her is to just do it, and not think about anyone else who has ever done it before.

The sneak peek at The Crown's new era comes days after the show's second season earned 13 Emmy nominations, including acting nods for Foy, Matt Smith (Prince Philip), Vanessa Kirby (Princess Margaret), and Matthew Goode (Antony Armstrong-Jones). Such recognition feels like the perfect send-off for The Crown's first batch of actors, but the upcoming cast could easily be in their shoes next year. Colman joins a cast that includes Tobias Menzies, Helena Bonham Carter, and Ben Daniels as the characters whose original actors are all nominated for Emmys. But, you know, no pressure, guys.

According to Variety, the show's third season will cover 1964 through the early 1970s. With the Queen's two oldest children coming of age in Season 3, Erin Doherty will play Elizabeth's only daughter Princess Anne. The person playing Prince Charles has yet to be officially announced, but several UK publications have reported that actor Josh O'Connor is linked to the role. Come on, Netflix, you're due for the reveal of more juicy bits about the new season — want to confirm this gossip?

I'll try to take The Crown's words of advice and be patient, but the show will need to release more photos of the new cast soon to truly keep me satisfied. Season 3 of The Crown will debut on Netflix in 2019.

More like this
Netflix's 'Bridgerton' Spinoff About Queen Charlotte Will Deliver So Much Royal Drama
By Cianna Garrison
'Sweet Magnolias' Season 2: Netflix Release Date, Cast, Trailer, & More
By Dylan Kickham
Netflix Canceled 'The Irregulars' After 1 Season & Fans Are NOT Pleased
By Ani Bundel
Stay up to date