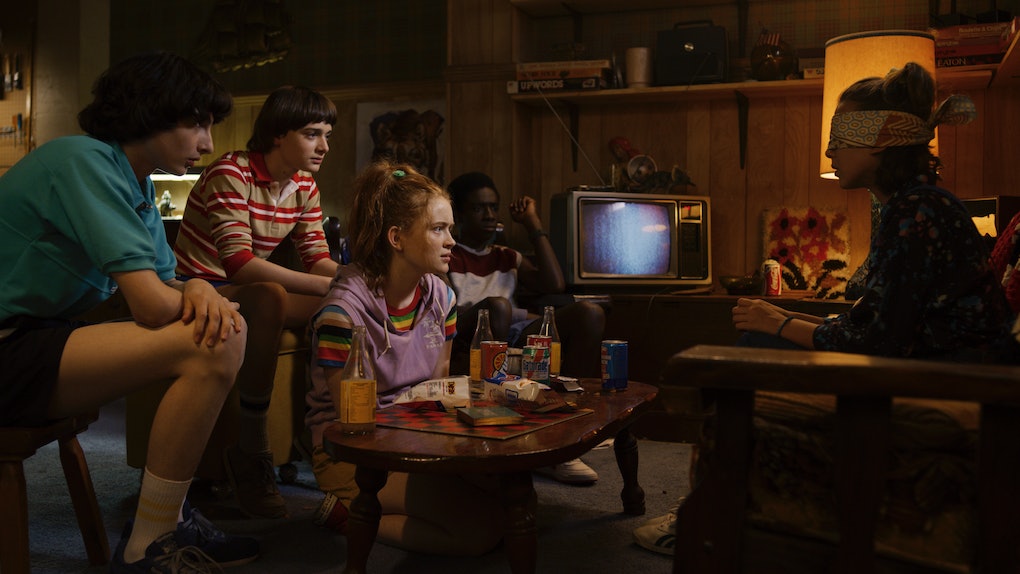 This post contains spoilers for Season 3 of Stranger Things. The ending of Season 3 of Stranger Things inspired plenty of theories abut the role new locations would play in a possible Season 4. Netflix has yet to confirm more episodes of the sci-fi hit, but creators Ross and Matt Duffer have hinted at what the next season would entail, and their latest tidbit only emphasizes the importance of Season 3's mysterious post-credit scene. This Stranger Things Season 4 spoiler confirms that Hawkins' international visitors are only the beginning of a new turn for the drama.

As the internet has thoroughly discussed by now, Jim Hopper (David Harbour) sacrificed himself in order for Joyce (Winona Ryder) to destroy the machine connecting to the Upside Down in a timely manner. Seeing as viewers didn't see his body melt during the explosion, their belief that Hopper may still be alive only strengthened during a post-credit scene set in a Russian prison. The guards revealed that there was an American in one of their cells, but they ultimately dragged another Russian to a grisly end against the Demogorgon kept in the depths of the prison.

Whether or not you believe the American is Hopper, the likelihood that part of Season 4 takes place in Russia seems high. But as Eleven (Millie Bobby Brown) was still without her telekinetic powers three months after losing Hopper, how do the kids of Hawkins play into that location change? Speaking to Entertainment Weekly, the Duffer Brothers hinted at these small-town folks heading toward bigger horizons.

"I think the biggest thing that’s going to happen [in Season 4] is it’s going to open up a little bit, not necessarily in terms of scale, in terms of special effects, but open up in terms of allowing plotlines into areas outside of Hawkins," Matt Duffer said.

The show previously crossed town borders in Season 2 when Eleven traveled to Chicago in search of Kali (Linnea Berthelsen), another psychic girl who grew up at Hawkins Lab. But now that the Byers family and Eleven have left Hawkins, Dustin (Gaten Matarazzo) has a long-distance relationship, and the town's Russian connections are clear, visiting new places in Season 4 seem inevitable. At the end of Season 3, Mike (Finn Wolfhard) was already planning visits with Eleven, so by the time viewers return to Hawkins, trips out of town may even have become the norm for the kids.

While the brothers revealed that they only have "the big broad strokes" of the next season, Ross Duffer confirmed that identifying the American and why the Russians have the Demogorgon would also play major roles. "We’re pretty excited about where it’s potentially going to go," Ross Duffer said about upcoming episodes. "Again, like we said, it’s going to feel very different than this season. But I think that’s the right thing to do and I think it’ll be exciting."

It's not quite Stranger Things without Hawkins, Indiana, but just as the kids learned this season, growing up means big changes. Fans will have to wait and see how the show handles these potential differences. Season 3 of Stranger Things is streaming on Netflix.