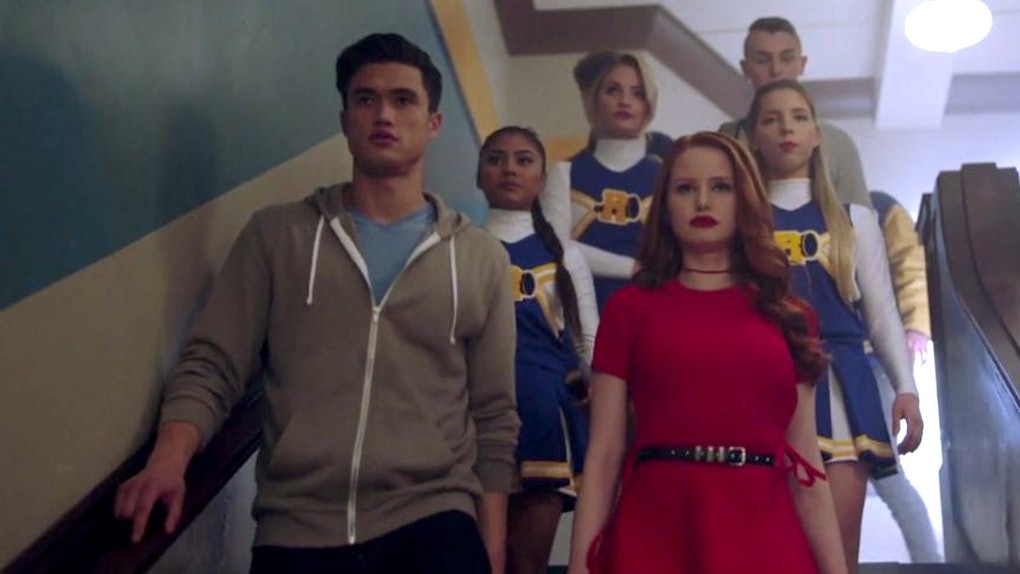 This 'Riverdale' Season 5 Photo Of Cheryl & Reggie Is So Bizarre

It's no secret Riverdale is one of the wildest shows on TV, but the latest peek at the upcoming season has fans more confused than ever about what could possibly be going on. To tease Season 5, showrunner Roberto Aguirre-Sacasa posted a behind-the-scenes shot of a new episode... except the characters look a lot different than they ever have before. Seriously, the new Riverdale Season 5 photo of Cheryl and Reggie is a totally unexpected look for both characters.

After having to end Season 4 a few episodes early due to the coronavirus pandemic, the Riverdale cast and crew got back to work filming Season 5 in September. This new season is already a big deal because it will implement a seven-year time jump into the future, bypassing the gang's college years and then some to explore what the former high schoolers will be up to in their mid-20s. But before the time jump, Season 5 will kick off with the three pivotal senior-year episodes that were meant to cap off Season 4 before production shut down. Those episodes will focus on Riverdale High's senior prom and graduation.

It may sound quaint for a show about serial killers, cults, and cursed board games to dial it back for some traditional teenage milestone episodes, but of course, Riverdale will be putting its weird, unexpected twist on things. After two weeks of filming, Aguirre-Sacasa shared a behind-the-scenes pic from one of the new episodes, which features Cheryl covering her signature red locks with a frizzy black wig and Reggie donning a leather face mask.

There's no clear explanation for the unexpected new looks, although since production only just begun, it's likely fans will see this scene in the early Season 5 episodes before the big time jump, so at least fans probably won't have to wait long for an explanation. Fans have a lot of theories about what might be going on here, with some guessing Cheryl may be dressing up as Veronica for whatever reason. The most likely guesses, though, are that the Riverdale High students will pay homage to a camp classic like The Rocky Horror Picture Show or American Horror Story: Murder House.

Whatever is going on in this strange photo, fans will get to see it play out when Riverdale Season 5 premieres on The CW in early 2021.